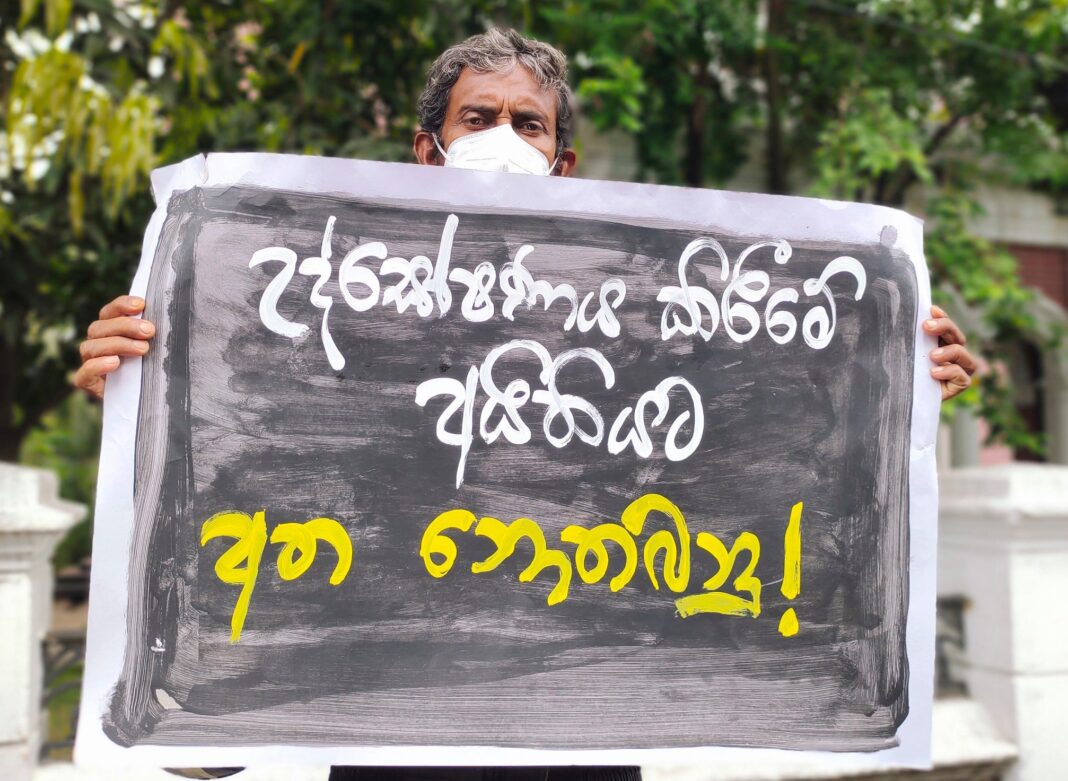 Image: Do not touch the right to protest!

A principal and a teacher who support the ongoing teachers’ and principals’ trade union actions demanding solutions to their issues including salary anomalies, have been summoned before the Criminal Investigations Department (CID) to record a statement yesterday (21) in connection with a complaint lodged against them over allegedly threatening a group of teachers.

The complaint had been lodged by a group of teachers of a leading government school in Colombo regarding an alleged incident where they had allegedly been threatened by the said principal and teacher to not carry out online teaching activities.

The principal in question is Mohan Weerasinghe of the Sri Lanka National Principals’ Union (SLNPU) and the teacher is Shreeni de Silva of the Independent Education Employees’ Union (IEEU).

However, speaking to the media yesterday, Ceylon Teachers’ Service Union (CTSU) General Secretary Mahinda Jayasinghe, who accompanied Weerasinghe and de Silva to the CID, claimed that a group of pro-government teachers had met with Public Security Minister Rear Admiral (Retd.) Dr. Sarath Weerasekera and told him that they were threatened. According to Jayasinghe, the said group of teachers who have met Weerasekera, represent the Sri Lanka Podujana Education Service Union (SLPESU) and the Sri Lanka Freedom Teachers’ Union (SLFTU), and that the CID had then, based on the complaint they lodged with the Minister, summoned Weerasinghe and de Silva to record statements.

“Today, we had to spend more than five hours here. It is very clear that all of this is happening on the orders from high up, from powerful persons. Especially today, Weerasinghe and de Silva were summoned before the CID to record a statement regarding a complaint made to the Public Security Minister by a certain group. Where in the law is it mentioned that someone can lodge complaints with a Minister?” he queried.

Speaking further, Jayasinghe warned that if the Government continues to intimidate teachers and principals in this manner, they would take the ongoing trade union actions forward more strongly.

“If they think that we can be intimidated by these actions, that is where both the Government and Weerasekera have got it wrong. The only solution to stop this trade union struggle is to provide a fair solution to our issues and nothing else would help stop it.”
Meanwhile, speaking to the media, de Silva said that she had not received any written notice to appear before the CID.

“I was told to come here via a phone call. The complaint was about a 21-second phone call, but the question is whether anyone can be threatened within such a small time duration. I didn’t make any threats to anyone, but I actively support this trade union struggle and will continue to do so,” she claimed.
Weerasekera was not available for comment.

Weerasekera recently stated that if anyone influences the teachers who are not involved in the trade union actions to stop carrying out online teaching activities, such persons would be investigated through the CID and would be subject to punishment under the provisions of the Penal Code.

Meanwhile, Sri Lanka Podujana Peramuna (SLPP) Parliamentarian Jagath Kumara Sumithraarachchi recently claimed that Weerasekera’s actions with regard to how the teachers’ and principals’ trade union protest actions were dealt with had contributed to the intensification of the ongoing teachers-principals trade union strike actions. “It was Weerasekera’s actions that led to the intensification of the teachers’ trade union actions to this level. Had he not been the minister in charge of the Police, it would have come to an end by now,” claimed Sumithraarachchi.