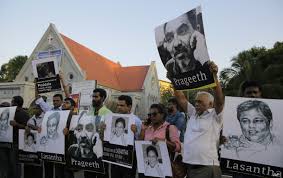 The Government is to strip the civic rights of those responsible for falsely implicating or involving others in murders or related investigations.

Their conduct will be probed by a Special Presidential Commission to be appointed by President Gotabaya Rajapaksa. Its tasks will cover those serving state investigative agencies such as the Criminal Investigation Department (CID), the Financial Crimes Investigation Division (FCID) and other units. Also to be probed will be civilians who have played a role.

When the SPC findings are concluded, a resolution will be moved in Parliament for those involved to be stripped of their rights. Cabinet approval has been given for the appointment of the SPC.

Ahead of the SPC probe, those who conduct criminal probes – the Police Department’s coveted CID – have themselves now come under a probe.

It was sparked off by events involving the hurried departure from Sri Lanka of Chief Inspector Nishantha de Silva, head of the organised crimes division of the CID. He left for Switzerland last Sunday with his family and the government has learned he is seeking asylum there.

Among the high-profile cases Chief Inspector de Silva has been handling was the killing of The Sunday Leader Editor, Lasantha Wickremetunga, journalist Prageeth Ekneligoda and the abduction and torture of Keith Noyahr, the Associate Editor of The Nation newspaper.

In a serious turn of events, in at least one of these cases, it has come to light that alleged efforts have been made to implicate a onetime senior official who had no link to the incident.

Chief Inspector de Silva functioned directly under CID Director, Shani Abeysekera. He has since been transferred as Personal Assistant (PA) to the DIG of the South.

The probe extends to other areas including allegations that matters related to the investigation have been discussed at a Colombo hotel with those not officially associated with the CID. Also allegedly linked to the move is an attorney turned diplomat.

Another probe relates to the doctoring of a purported news briefing by the spokesperson of the US Department of State.

The widely circulated video clip is said to have been put together in Colombo with the help of parties abroad, Police suspect. It was part of a malicious campaign against President Gotabaya Rajapaksa when he was presidential candidate and falsely claimed he was still a citizen of the United States.
http://www.sundaytimes.lk/191201/columns/spc-to-strip-deceitful-senior-officers-of-their-civic-rights-380366.html