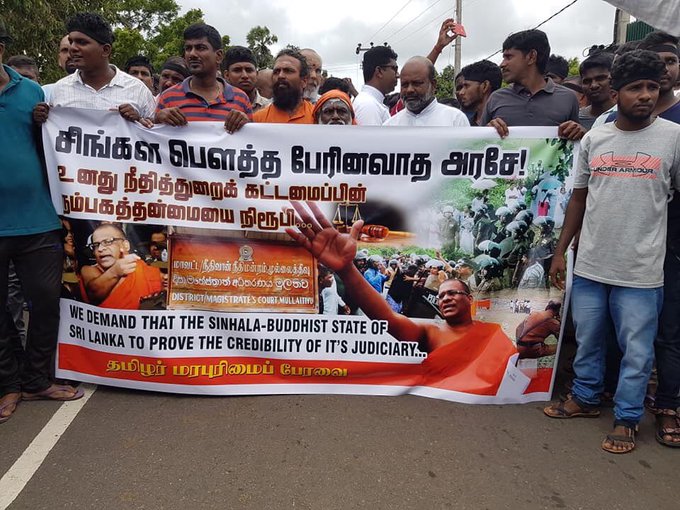 Northern Province Governor Dr. Suren Raghavan yesterday insisted that politicians should not create communal and religious tensions ahead of the presidential election, targeting the Northern voters and hindering their democratic rights.

“As the Northern Province governor, I urge politicians not to use the Northern peoples’ rights according to their whims and fancies.

At the moment southern politicians are in the North in order to stir up things with regard to the final rites of the chief incumbent of Gurukanda Nayaru Rajamaha Viharaya. These are primitive and tribal political campaigns. We clearly know that the Northern votes are a decisive factor in presidential elections,” he said.

The Governor was addressing the media at the Governor’s office in Battaramulla. “The Northern Province should not be used as a play field to create communal tensions for political advantages. Legal measures will be taken if any kind of action is done to breach the peace. Within these four years no irregularities were reported from the Northern Province and the northern civilians managed to live peacefully with the Army. President Maithripala Sirisena handled the tri-forces with great effort. The era where the Army was labelled undisciplined was swept away by the President,” he added.

“Politicians must perform their duties politically and religious leaders must perform their own relevant duties. When politicians preach and religious leaders do politics the country is led into turmoil. Let the Tamil majority cast their votes democratically. We all are under the Constitution and we abide by the law. President Maithripala Sirisena also obeyed court orders being an executive president,” he noted.

“According to the copy that I read form the courts, a verdict was issued not to do the final rites at the temple premises and instead to do it in a land close to the coastal belt near the temple. But the cremation had been done in the temple premises. There is an issue because the boundary for the temple is not stated. But the Courts had clearly declared not to use this area. Both the parties have agreed to this discussion.”

“In 2016, though it was mentioned as an archeological site, the Gazette notification has not mentioned the boundary. The complication arose when the new measurements were taken to mark the boundaries. There was an Army camp during the war era here and they had a set of buildings which they used and it was handed over to the chief incumbent.

During the measurements both parties had a debate regarding their historical heritages. Director General of Archeology Prof.A. B. Mandawela, says this belongs to a historical archeological place. The issue of the Gurukanda Nayaru Rajamaha Viharaya now lies in the hands of Courts,” he further said.

The Northern Province is distinct from others as it has its own problems such as the Indian fishermen issue, refugees, landmine issues, missing persons and political Diaspora issues. “I have done my duty amidst political, religious and racist demarcations. I have done all my duties as a governor, socially culturally and economically,” Raghavan said.

Media has a major role and a hand in a turning point of the country. I request media institutions during the elections time to safeguard democracy within the country,” Raghavan said.