Sri Lanka: Slaughter in the no fire zone 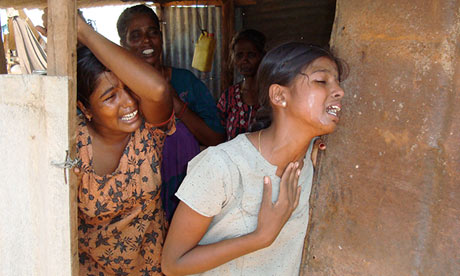 The Sri Lankan government still denies responsibility forthe killing of up to 70,000 Tamil civilians at the end of the civil war in 2009. So why has it been chosen to host a Commonwealth summit asks Callum Macrae, director of a harrowing film about the massacre
I have spent the best part of the last three years looking at some of the most terrible images I could have imagined. I’ve covered wars and seen some awful things, but few that could prepare me for the hours of video and mobile footage that emerged from the last 138 days of Sri Lanka‘s bloody civil war between the government and the Tamil Tiger secessionists; a war that ended four years ago – and whose bloody denouement is the subject of my film No Fire Zone: The Killing Fields of Sri Lanka.

The film records what happened when the government of Sri Lanka told some 400,000 civilians to gather in what they described as “no fire zones” – and then subjected them to merciless, sustained shelling. We humans are good at reducing terrible massacres to statistics. We instinctively distance ourselves from the lost humanity represented by heaps of corpses or rows of dead bodies. But it is more difficult to avoid the anguish of those who survive.

For example, the two young girls, crying hysterically in a fragile bunker of sandbags in the immediate aftermath of a shelling. They want to rush from their shelter to help the injured, but a woman is holding them back – because one shell is almost inevitably followed by another. The girls are weeping as they look at the carnage in front of them. And then, in a chilling moment, one of them recognises someone, and her hysterical cries turn to anguished screams: “Mama!”

Two men – one is probably the girl’s father – ignore the danger and stumble blindly from the bunker to fall beside, and hold, the horribly damaged corpses in front of them.

This awful story is just one of tens of thousands of such incidents. The most recent UN report suggests that as many as 70,000 civilians died in the last few months of the war in 2009, possibly more.

A few of those who died were killed by Tamil Tigers, who are accused of shooting Tamil civilians attempting to escape the no fire zones’ killing fields. The Tigers saw the civilians as a bargaining counter that would force the international community to intervene, and so would not let them leave. That was a crime, a betrayal of the trust of the civilians – and also a terrible miscalculation, because the international community did not intervene: it did not even impose meaningful diplomatic or economic sanctions against the Sri Lankan government.

These crimes by the Tigers – and the failure of the international community – must not be forgotten. But the vast majority of the civilians were killed by government forces. And that too, we must remember.
Another incident in the film provides some relief from the carnage. Two young brothers are sitting in a makeshift hospital. Their parents are almost certainly among the nearby dead and maimed. The person filming them asks: “Are you injured too?” “No,” says the older brother quietly. He is 11 or 12 years old, and holding his younger brother protectively round the shoulders: “Not us.” The younger child turns to look at the carnage around them but his brother gently guides his head back towards him and away from the terrible sights. Humanity survives in this awful situation.

I watch these two scenes and still find myself crying. And that is why I am so distressed that David Cameron has agreed to go and shake the hands of the men responsible for these crimes. The next meeting of the Commonwealth Heads of Government (Chogm) is to be held in Sri Lanka in November – and he has said he will go. I find that particularly distressing because it is clear these men think the event will mark their rehabilitation in the eyes of the world – and if Cameron is not careful, his actions will be interpreted as lending support to that view.

I know he is broadly aware of what happened in those terrible weeks in Sri Lanka. In fact, in 2011, the day after Channel 4 broadcast our first film on this subject, Sri Lanka’s Killing Fields, he told parliament it was “an extremely powerful programme” that referred to some “very worrying events”. He did add, though, that he hadn’t actually seen it himself. For his benefit – and those who remain largely unaware of these events (and this includes most people) – I will briefly recall the facts.

After decades of violent repression of the island’s Tamil minority by the Sinhala Buddhist majority, a brutal but effective secessionist rebel force, the Tamil Tigers, or LTTE, launched a 26-year war that saw the establishment of a de facto independent state of Tamil Eelam in the north-east. The Tigers ruled this state with an iron grip in which dissent was not tolerated – but with the undeniable consent of the majority of the Tamil population. In pursuit of this war they were prepared to use child soldiers and suicide bombers against civilian as well as military targets.

But by January 2009 the new president of Sri Lanka, Mahinda Rajapaksa, had inflicted major defeats on the Tigers. Bolstered by – and often appropriating – the west’s rhetoric of the war on terror, he was poised to launch a final offensive, not just against the Tigers but against the Tamil people themselves.

No Fire Zone shows the relentless horror of those final weeks. These are images so shocking that they changed votes when we showed a cut of the film at the UN Human Rights Council in March. In the last few days of the war, in May 2009, the massacre of the civilians was followed by another series of war crimes. Victorious government troops systematically executed bound, blindfolded prisoners. Women fighters were stripped, sexually assaulted, blindfolded, and shot in the head. In one incident the 12-year-old son of the Tigers’ leader is seen first in captivity, eating a snack. Two hours later he lies dead, having been shot, five times, at point-blank range. These events were recorded by the perpetrators on mobile phones as grotesque war trophies.

These things happened and they must not be ignored. Because although the war in Sri Lanka is over, the repression continues – indeed it is escalating. The Tamils in the north are denied basic human rights; places of worship and of cultural or religious significance to the Tamils are being destroyed; rape is routinely used as a weapon of repression; and the ethnic makeup of the region is being re-engineered by a Sinhala plantation of fishermen and farmers. Throughout the country, government critics are being attacked, silenced and are disappearing. The judiciary is under attack – the chief justice impeached and independently minded judges marginalised. Last month a demonstration by villagers protesting against a factory polluting their water supply was violently suppressed by the army – and three were killed.

Just last week the UN Human Rights Commissioner, Navi Pillay, ended a week long fact-finding trip to Sri Lanka by warning that “surveillance and harassment appears to be getting worse in Sri Lanka, which is a country where critical voices are quite often attacked or even permanently silenced.”

When Cameron announced he would attend Chogm, Alistair Burt, the minister responsible for Sri Lanka, stated that the British government expected the Sri Lankan government to “guarantee full and unrestricted access for international press covering Chogm”. Yet when I was in Australia recently to promote the film, a senior Sri Lankan diplomat there, Bandula Jayasakara (formerly Rajapaksa’s chief media adviser), tweeted a message to me. He said he would “make sure you don’t get a visa” and accused me of being “hired by [Tiger] terrorists as a full time propagandist for the bloodthirsty terror group overseas”. And when I recently told a Sri Lankan newspaper that I intended to visit the country to cover Chogm I received a series of death threats, all published online. You are welcome to come to Sri Lanka, said one, “only to go back in a coffin”. And another said: “Callum Macrae – do not come to Sri Lanka. You will be abducted in a white van, and sent to meet Lasantha Wikremasinghe [sic].” White vans are recognised as an instrument of terror in Sri Lanka, regularly used to abduct government critics. Lasantha Wickrematunge was the editor and founder of the Sunday Leader – a respected newspaper critical of the Rajapaksa regime. He was shot and killed by unknown assassins in January 2009, just a few days after criticising the government’s conduct of the war.
Two years ago the Commonwealth of Nations pledged a renewed commitment to its core principles of “democracy, the rule of law and human rights”. If Sri Lanka hosts the next meeting of Chogm, normal practice decrees that its president will assume the chairmanship of the Commonwealth for the next two years. And so a regime accused of some of the worst war crimes of this century will be in charge of the Commonwealth’s drive for human rights, democracy, and the rule of law. As Human Rights Watch has observed, this is a situation that will hold the Commonwealth up to ridicule; and it is a decision Cameron appears to have endorsed.

The Commonwealth is not the only important international organisation involved – there is also the UN. The UN’s Responsibility to Protect – formally adopted in 2005 – was given its first real test by the last few months of the war in Sri Lanka; it failed, shamefully and catastrophically.

The Rajapaksa regime has had more than four years to launch a credible independent investigation into the war crimes. It has shown itself neither willing nor capable of doing so. Such inquiries as it has made have been transparently bogus and internal repression is worsening – apparently encouraged by the failure of the world to seriously engage.

As a result it is increasingly likely that in March next year the UNHRC will call for an international inquiry into the crimes. If it cannot even manage that, it will give a green light to Rajapaksa, Assad and their kind, who slaughter their own citizens in confident expectation of impunity. Perhaps even more seriously, it will send a message to the beleaguered Sri Lankan opponents of the Rajapaksa regime that they are on their own.
As for the Commonwealth, if it expects to survive as a credible advocate of democracy and human rights, Cameron must raise objections to it being led by a regime accused of these crimes.

• No Fire Zone, a feature documentary by Outsider Films in association with Channel 4 and ITN productions, premieres on Thursday 5 September at the Curzon, Soho. The film will then be taken on an international and UK tour and will simultaneously be made available in the UK on Video on Demand and through a free app developed by Channel 4.
@Callum_Macrae
@NoFireZoneMovie
– The Gaurdian