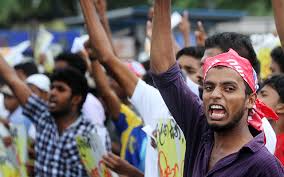 AFP – Sri Lanka’s police faced censure on Friday over an attempt to “abduct” a student activist, a tactic widely used against dissidents by the previous strongman leader’s regime.

Finance Minister Mangala Samaraweera said he lodged a protest with Police Chief Pujith Jayasundara over an attempt by plain-clothed officers to seize a student known for his anti-government views on Thursday night. Other students prevented him from being grabbed by the plain-clothed officers.

The minister said the new government came to power in January 2015 promising to end the “white van culture” and ensure that people had more freedom, but the latest police action was a retrograde step.

“I spoke with the Inspector General of Police and he said he will take disciplinary action against those responsible,” the minister told reporters in Colombo. “We condemn this action of the police.”

Being “white-vanned” had become a verb synonymous with being abducted – a tactic widely used by Sri Lankan forces to deal with troublesome opponents during Rajapaksa’s decade in power.

The abduction attempt came hours after President Maithripala Sirisena gave legal effect to a 2016 law that established an office to trace the tens of thousands of people who went missing during the island’s decades-long ethnic war.

Samaraweera told the police chief that the timing of the illegal police action suggested there may be elements trying to discredit the administration.

Under the previous regime, police and security forces killed several people when they fired at them during anti-government demonstrations. White vans were deployed to abduct dissidents. (Colombo/July21/2017)