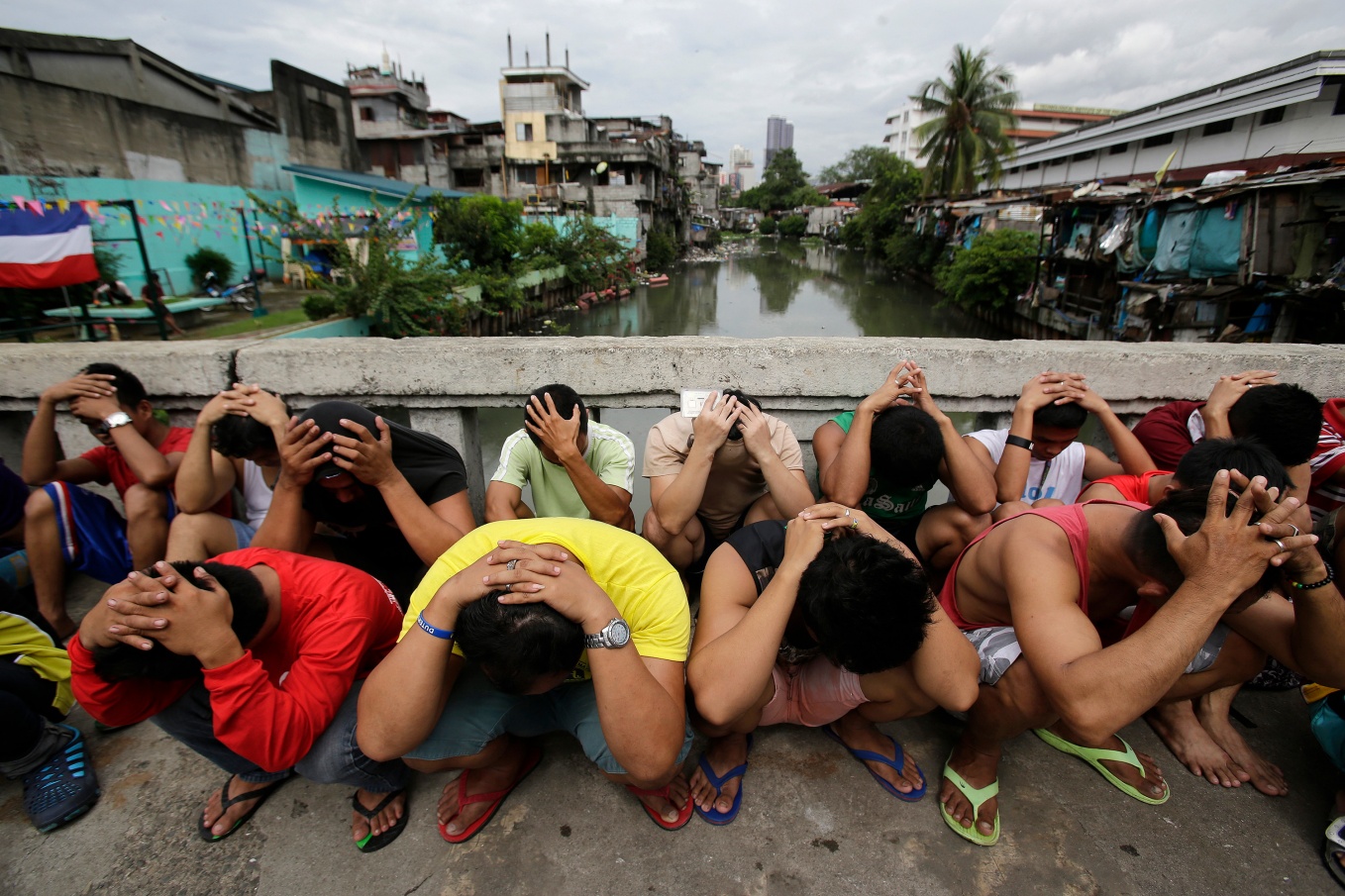 Filipino men place their hands over their heads as they are rounded up during a police operation on October 7, 2016. Photo credit: © Aaron Favila/AP Photo.

This summer, Sri Lanka’s president, Maithripala Sirisena, defiantly announced that he could end the country’s 42-year moratorium on the death penalty and sign off on the execution of convicted drug traffickers alleged to be running illegal operations from their prison cells.

More disturbing, a government spokesperson added that the country will try and “replicate the success” of the Philippines government’s drug war, a bloody crackdown that is estimated to have claimed over 12,000 lives since President Rodrigo Duterte took office in 2016. Many of these deaths are extrajudicial killings.

The degradation of human rights under Duterte hardly deserves replication, and the Human Rights Commission of Sri Lanka has expressed its dismay that any “cruel and inhumane” punishment is being considered. The EU and other diplomatic missions have also warned against imposing the death penalty due to its “[incompatibility] with human dignity.”

Unfortunately, Sirisena dismissed these concerns and stated he will convene the judiciary, law enforcement, and prison officials this week to decide which people will be executed first.

If Sirisena is successful in breaking Sri Lanka’s four-decade hold on executing people, he will drag Sri Lanka to the extreme fringe of the international community, aligning it with countries that violate international human rights law by implementing the death penalty for drug offenses, such as China and Saudi Arabia.

Sri Lanka is sadly not alone in its willingness to join this group. The Bangladesh government is moving to expand application of the death penalty for drug offenses, as is India’s Punjab state government, and Duterte continues to push for reinstatement of the death penalty in the Philippines. Even the president of the United States came out in favor of this draconian policy earlier this year.

All of these governments have trotted out the familiar fallacy that there’s a need to “get tough” in response to drug-related crime. Not only is such justification based on inflated or unreliable data, but there is no proof that imposing the death penalty has any effect on drug use or trafficking.

So what are the consequences of the death penalty, if not a hindrance to the drug trade? Beyond being barbaric in practice, the death penalty is disproportionately imposed on the poor and most vulnerable; most of those sentenced to death are not kingpins but rather low-level drug couriers. Further, the death penalty demonizes people who use drugs and enables an environment of discrimination and abuse toward this group.

Perhaps most disheartening is the fact that Sri Lanka’s move is going against the global trend away from using the death penalty for drugs offenses.

As detailed in Harm Reduction International’s most recent research on this topic, only a minority of the 33 countries that have the death penalty for drug-related crimes actively execute people. As more countries continue to restrict use of the death penalty, executions have more than halved since 2015, falling from 718 in 2015 to 280 in 2017.

For example, Malaysia and Thailand—both of whom were once among the worst offenders in this respect— recently passed legislation which in practice restricts the application of capital punishment. Even the hard-line government of Iran, which until last year executed hundreds of people, recently passed a legislative amendment raising the minimum quantity of drugs required to incur capital punishment. Executions have since dropped 99 percent, and a judicial review into the death and life sentences of thousands of people is underway.

This move away from the death penalty could be seen as an acknowledgement that it is completely ineffective in curbing the drug trade. The UN Office on Drugs and Crime admitted, in its 2018 World Drug Report, that the global drug trade continues to flourish, stating that “both the range of drugs and drug markets are expanding and diversifying as never before,” with “production of opium and manufacture of cocaine at the highest levels ever recorded.”

If Sri Lanka is serious about protecting the health of its population from drugs—and not tarnishing its international reputation—its government must abandon any plan to resort to executions.

Harm Reduction International is a grantee of the Open Society Foundations.