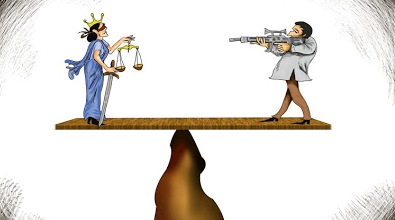 Laksiri Fernando
It was incumbent on the Court of Appeal today, 3 January 2013, to rule an order on the writ applications filed by seven petitioners against the impeachment proceedings initiated by the ruling party in Parliament against the Chief Justice on 6 November 2012, coinciding with the Supreme Court ruling on the controversial Divineguma Bill. This Bill was initiated by the brother of the President, Minister Basil Rajapaksa. The Supreme Court ruling pointed out major flaws in the Bill in addition to several contraventions of the country’s constitution, which is supreme.

The ruling of the Court of Appeal says, based on its reference of the matter to the Supreme Court on 20 November 2012, as the writ applications had a major bearing on constitutional interpretation that the Standing Orders are not law and thus the Parliamentary Select Committee (PSC) has no constitutional power to inquire or to determine any misbehaviour on the part of the Chief Justice.

This should have been common sense, at least after the matters were raised, if not for the inglorious political campaign conducted by the ruling party and its media outlets. There are several PSCs under various standing orders, but can they or have they ever prosecuted anybody except on a matter of Parliamentary privileges which is allowed under the constitution? The latter is also a matter that needs to be carefully thought about in a review of the present constitution in the future. Giving any judicial power to Parliamentarians is like giving a razor to a monkey, however much the monkeys call themselves supreme.

It is true that a mock trial was conducted in 1984 against the then Chief Justice, Nevil Samarakoon, but no verdict was given having realized the inherent contradictions of the whole process. The governments in Sri Lanka have so far failed to rectify the situation irrespective of the promises given before the UN Human Rights Committee in 2002. Of course they can even call the UN imperialist or Western conspiracy. What is lacking in the impeachment procedure is an ‘independent judicial component’ outside of Parliament.

Parliamentarians are primarily law makers and not judges. They should bring good laws to the country without relying on the law of the jungle. When they try to transfer roles, trying to be judges instead of being legislators, it is like the donkey trying to do the dog’s job and then getting a good beating. We have a good example of their mockery of trying to act as a judicial tribunal in the PSC’s Kangaroo Court. They undoubtedly surpassed King Kekille.

We should guard ourselves, however, of excessively rejoicing at the Appeals Court ruling or excessively amusing ourselves about the hilarious acts, no doubt, that they conduct because of the serious political implications of the situation. This is a plain and simple, but a serious constitutional crisis. There had been no such a thing in the past. Even the colonial governor finally decided to abide by the decision of the Supreme Court in the Bracegirdle case in 1937. There had been no confrontation between the judiciary and the legislature backed by the executive before. There had been tensions or disagreements which are normal in a democracy under separation of powers. But there had been no head on clash between the two even during JR’s time involving fundamental constitutional issues.

People normally know that the politicians especially when they are in power open their big mouths. But such a venom and hatred against the judiciary as unleashed at present are completely unprecedented. Sri Lanka has experienced industrial strikes, aborted military coups, communal violence, insurrections and even terrorist separatism. But none of these events had led to an institutional or structural crisis in the constitutional framework of the basic democratic system in the country. There had been a decline and a deterioration, but not complete negation. The most problematic factor in the situation is that the onslaught against the so far accepted norms of the judiciary comes from the elected members of Parliament. Have they alienated themselves to such an extent from t

There are indications that the country is at cross roads. We have come to a junction where the rulers wanted us to go further in the authoritarian direction. They are promising luxury for a few and only subsistence for the many. They have been painting the surface of the economy but not the substance. They have been neglecting education, health and the poor but emphasising on entertainment and luxuries of the few. First the academics resisted and now the judiciary is resisting in a different and an institutional manner. Some people may be confused because they are the ones who defeated terrorism. But instead of winning peace they are now creating new animosities between the communities.

There are some dangerous pronouncements. President’s brother who holds the armed forces under his tutelage recently announced that there is a foreign conspiracy against the country. He implicated the judiciary directly in this foreign conspiracy. A Sinhala extremist Minister who was a so-called judge in the Kangaroo Court went further and talked about an emerging situation of dual power, between the judiciary and parliament engineered by foreign forces. Many others have been talking in the same lines. These theories or theories of conspiracies cannot be easily dismissed as political rhetoric.

The vehemency of this propaganda must be having an agenda. It cannot simply be to oust the CJ or subjugate the judiciary. The government is undoubtedly is becoming unpopular day by day. They cannot deliver what they have promised. The country is running by leasing the resources to dubious quarters. The surface of the economy is inflated through IMF and Chinese loans. The inflated bubble might burs at any time. There is a widening gap between the expectations and possible achievements among the middle classes and the poor and the rich. The type of economy that they are now running is very much similar to North Korea that requires the squeezing of the democratic system, dissent and freedom of expression further.

We are in a crisis. The term crisis in Chinese parlance is not necessarily a bad thing. It means problems; it means prospects. The prospects are to seize the opportunity and change the situation. The coming months and weeks would be decisive in this respect. Wimal Weerawansa addressing the 7th Hour (Sathveni Paya) at Rupavahini recently lamented that the crisis was initiated by the judiciary. There is some truth in it in the sense that the judiciary has started asserting its independent role after so much of pressure and bullying in the past. It is a good sign.

With all the best prospects for the people to pressure the government to drop the impeachment charges and respect the independence of the judiciary, one sad thing in the present situation is the ambiguous policy of the main opposition party, the UNP. Their members have declined to respect the summons of the Court of Appeal very much similar to the position of the ruling UPFA. It is an internationally accepted norm that impeachments are subject to judicial review if constitutional transgressions are involved. The present impeachment in Sri Lanka is a clear case in this respect. It is hoped that the UNP soon makes a correction of this position without being too late.
SLG