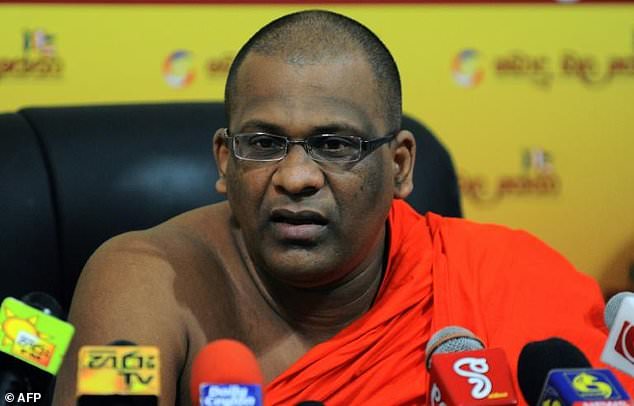 Image:Police said the warrant for the arrest of Galagodaatte Gnanasara relates to an accusation of insulting the Koran that dates back to April 2014, months before the outbreak of deadly religious riots.

A Sri Lankan court issued a warrant Thursday for the arrest of a radical Buddhist monk accused of instigating arson attacks against the island’s minority Muslim community.

Police said the warrant for the arrest of Galagodaatte Gnanasara relates to an accusation of insulting the Koran that dates back to April 2014, months before the outbreak of deadly religious riots.

The magistrate ordered his arrest after he failed to appear for a court hearing into the matter on Thursday.

Police are also investigating more than a dozen recent complaints of incitement against Gnanasara, who went into hiding in May, after a series of arson attacks targeting Muslims.

On Thursday they said they had arrested two of his associates in connection with a petrol bomb attack on a mosque last month.

Gnanasara’s Buddhist Force or BBS is accused of instigating the hate crimes.

On Sunday, police said they had made the first arrest of a BBS member in connection with four arson attacks in a Colombo suburb.

Prime Minister Ranil Wickremesinghe vowed on Wednesday that he would not allow a repeat of 2014 anti-Muslim riots in which four people died and hundreds of homes were destroyed, promising tougher legislation.

With stoning and desecration of Muslim-owned places now an almost daily occurence, the government faces international criticism over its failure to tackle the violence and rein in the BBS.

In a video message released Sunday, the group denied any involvement, but accused the government of allowing Islamic extremism to flourish in the Buddhist-majority nation.