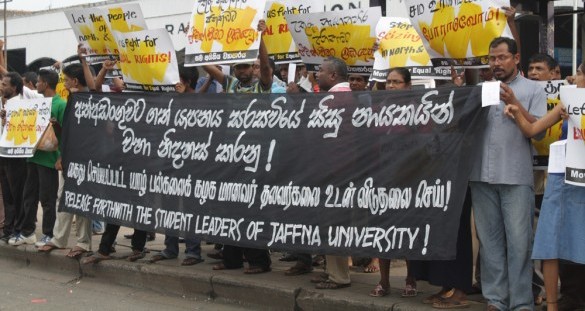 The Sri Lankan military and the police continued their arrests of Tamil youth and Jaffna University students in the war-ravaged north over the past week, detaining many under the draconian Prevention of Terrorism Act (PTA). Detainees can be held for 90 days without trial under the PTA and the defence secretary can extend the incarceration. Police can also use confessions extracted under torture as evidence against detainees.
The harassment started on November 27 when a group of university students attempted to commemorate victims of the government’s war against the separatist Liberation Tigers of Tamil Eelam (LTTE), which was militarily defeated in May 2009.

The police and military raided the university, attacked the students and ransacked a women’s hostel. The next day, the army brutally suppressed a student protest march against the anti-democratic assault. The military later arrested four student leaders following allegations by the Sri Tamil Eelam Liberation Organization, a pro-government paramilitary group, of a petrol bomb attack on its office near the campus.

Seven more students were later taken into custody by the police force’s notorious Terrorist Investigation Division (TID) and transported to Vavuniya. According to students, those arrested were tortured. The seven were released last Friday, following national protests by university students and strike action by Jaffna university teachers.

Tamil National Alliance (TNA) parliamentarian Suresh Premachandran told a protest in Kilinochchi last week that more than 45 Tamil youth had been taken into custody since November 29. Coordinator of the Sri Lanka Human Rights Commission Jaffna Branch, T. Kanagaraj, told the media Tuesday that the organisation had received 27 complaints thus far from parents in Jaffna and Kilinochchi.

Police have issued contradictory reports about the number of arrests. Police spokesman Prishantha Jayakody told the media that 10 people had been arrested by Wednesday last week. TID director Chandra Wakista, however, told the BBC that “20 to 25 have been detained.”

Among those arrested are youth recently released from military detention camps, following so-called rehabilitation, i.e., brainwashing. Around 300,000 Tamils were incarcerated in military-controlled camps following the LTTE’s defeat. Another 11,000 youth were detained at secret locations as LTTE suspects.

Although many prisoners have been freed following protests in Sri Lanka and internationally, they are under constant military surveillance. Hundreds remain in detention, accused of being “hard core” LTTE members and an estimated 800 political prisoners are incarcerated in southern Sri Lankan prisons. Some of them have been held for almost 10 years, without charge.

While the military has withdrawn from Jaffna University, Jaffna army commander Mahinda Hathurusinghe said the troops would stay off the campus only if politicians did not enter it. This is a direct attack on fundamental democratic right of students to engage in political activities. According to some workers, intelligence officers have been deployed within the university premises.

Jaffna University Teachers Association members decided to remain on strike until all students are released. A letter from academic staff to Sri Lankan President Mahinda Rajapakse stated: “The arrested students are facing dangerous situation. The military officers are trying to suppress the political problems by using the military power. The students were arrested on false reasons.”

The brutal assault on Jaffna students exposes the Rajapakse government’s claims that civilian rule has been established in the north. Colombo has deepened its military occupation of the Northern Province to suppress increasing discontent over the curbing of democratic rights, and rising unemployment and poverty among workers and rural masses. Jaffna University students have been a target of the military and the police because they have opposed the suppression of democratic rights, the privatisation of university education and the lack of education facilities.

The military and police claim that their assaults on Tamil youth are justified by a so-called resurgence of the LTTE. This is a fraud, aimed at whipping up anti-Tamil communalism. This long-standing political weapon of the ruling class to divide the working class has been renewed because of mounting economic and political problems facing the Sri Lankan government.

During recent weeks important sections of the working class have begun protesting over attacks on living conditions and social rights.

Demonstrations against the youth arrests have been held in Jaffna and Kilinochhi by Tamil capitalist parties and groups, including the TNA and Tamil National People Front, along with the Democratic Peoples Front and pseudo-left organisations, such as the Nava Sama Samaja Party and United Socialist Party.

While these organisations have condemned the attacks on university students and demanded the release of the detained youth, they have used the protests to appeal to the UN and the major foreign powers. Among the slogans shouted at the demonstrations were “International community, don’t keep mum anymore” and “UNHRC intervene and rescue Jaffna students.”

To suggest that the UN and the major powers, including the US, UK and India, would defend the democratic rights of the Tamil people is a political lie. These countries fully backed the war, including the bloody military offensive that resulted in the deaths of tens of thousands of Tamils. The US and its allies raised the human rights violations of the Sri Lankan government only to advance their interests in the region.

For their part, the Tamil capitalist parties, with the backing of the fake “lefts”, are attempting to reach a power-sharing accommodation with Colombo for the joint exploitation of working class and poor.

The anti-Tamil repression in the north is a warning to the entire working class. The Rajapakse government is preparing serious attacks against all sections of the working class and the rural masses as they come forward to defend jobs and living standards, in opposition to the International Monetary Fund austerity measures being imposed. Only an independent movement of the working class, uniting across Tamil, Sinhala and Muslim ethnic lines, rallying the poor and basing itself on the political fight for a Socialist Republic of Sri Lanka and Eelam, can end the military occupation in the north and east and defeat the government’s attacks.
WSWS