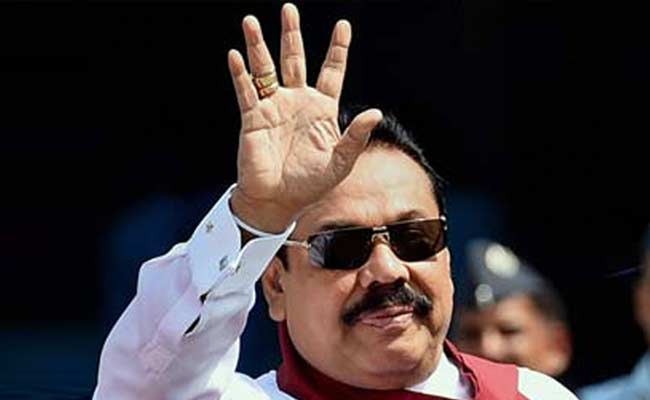 The Sri Lanka Rupavahini Corporation (SLRC) is the latest state owned institution that is reported to have fallen into the category of cash strapped establishments under the Rajapaksa regime. Similar to other state media organizations, the SLRC has also incurred huge losses during the last presidential election campaign thanks to the suba anagathayak policy of the former President, present Kurunegala District MP, Mahinda Rajapaksa.

For the longstanding SLRC employees, they had never witnessed in the institution’s history a period where it lost a large amount of its revenue like during the 2015 presidential election period.

A huge loss to the tune of several million rupees was incurred by the SLRC only for the free and discounted publicity given to the UPFA presidential candidate Mahinda Rajapaksa for the January 2015 presidential election.

In addition several millions of rupees of SLRC funds have been allegedly misused for the Rajapaksa’s election campaign under the then Media Minister Keheliya Rambukwella. Amongst them was the misuse of company funds for nearly Rs.1 million to purchase 600 GI pipes which had not been purchased for any corporation work nor has it been received by the institution to date. It is said that the money has been given to the former Media Minister Rambukwella for the presidential election campaign in the Kandy district.

According to angry SLRC employees, one of the best opportunities to generate a huge profit for the institution was prevented by the administration and the Sales Division by giving massive discounts for the Rajapaksa campaign. It is also said that Manager, Sales, Sanath Daluwatte had openly stated that it was under his discretion that discounts were given for advertisements and that he did not require the management’s approval to do so. Hence as a result, some of the UPFA presidential candidate’s advertisements had been broadcasted on credit but also had given astonishing discounts to Rajapaksa by the Manager Sales with the backing of the previous management.

“Generally it is the practice of any electronic media organization to double their rates at a time of an election to gain profits but instead of this technique, the SLRC gave a huge discount to Rajapaksa which was less than the normal rate card prices,” sources said.

Although this rate was formed targeting each and every election advertisement, it surprised us to see how a new methodology had been followed to give Rajapaksa a better rate for his advertisements. Since only a few who were closer to the Rajapaksa regime were involved in this blunder, it was too late when we came to know how the Rajapaksa advertisements had been telecasted for a mere pittance which is unimaginable,” sources claimed.

“When we went through the files after the fall of the Rajapaksa regime, we were surprised to see how the rates for Rajapaksa advertisements had not been increased and remained the normal rate which is Rs.100,000 for 30 seconds during the 8.30pm shows and how a further 50% discount had been given. In addition another discount too had been given to Rajapaksa,” sources alleged.

In reference to file number C 214/ 00625, the SLRC had entered into an agreement with Media Factory – an advertising agency on October 31, 2013 to telecast the UPFA candidate’s promotional advertisements on Rupavahini and Nethra channels and for the crawlers (the advertising belt shown underneath a programme). Rajapaksa promotion advertisements had to broadcast for 41.25 hours in the run up to the presidential election.

“According to this file, the SLRC had entered into an agreement with the Media Factory on October 31, 2013. How could they have entered into an agreement in 2013 for the 2015 election? This clearly shows how careless the sales division was when carrying out their work as they were hurrying to come into agreements to promote Rajapaksa without checking the accuracy of the details given on the papers. Leaving that aside it is astonishing to note how the SLRC had agreed to telecast advertisements for 41.25 hours for Rs. 40 million when the common candidate has paid Rs. 8 million for a mere 28 minutes,” sources added.

According to the agreement, Rajapaksa advertisements had to be broadcast for 148,500 seconds, which is 2,475 in minutes and 41.25 in hours. “For Rajapaksa, the SLRC charged Rs. 40 million for 2,475 minutes when the same institution charged Maitripala Sirisena’s campaign Rs. 8 million only for a duration of 28 minutes.

Had Rajapaksa’s advertisements were also charged the same as the common candidate Maitripala Sirisena, the income SLRC could have obtained was Rs.707.142 million. As a result of the ‘favouration’ given to Rajapaksa, Rupavahini Corporation incurred a loss of Rs. 667.142 million,” sources alleged.

Meanwhile, it has also come to light how another Rs.5 million worth of Rajapaksa promotional advertisements sponsored by the Urban Development Authority (UDA), which came under the then Defence Secretary Gotabhaya Rajapaksa, had been telecast without paying money.

“When we were going through the documents to gather more information on how the Rupavahini channel was used for the Rajapaksa election campaign, we came across another file with no reference number. According to the details of this file, one Red Lime agency had entered into an agreement to carry out UDA advertisements and this agency was in debt to SLRC.

“When questioned, Manager Sales, Sanath Daluwatte, he accused the former Director General Chandrapala Liyanage for this scam and that he did not have any knowledge of it. How can the Manager Sales claim as such as it is he who has to take the sole responsibility for the non-payment of Rs.5 million for the UDA sponsored Rajapaksa promotional advertisements?” sources added.

According to file No. C214/ 00636, the advertisements aired under this file had been sponsored by the Sri Lanka Freedom Party (SLFP) and the loss incurred by the SLRC amounts to Rs. 32 million.

“The loss to the Corporation from these advertisements has been estimated as Rs. 32 million. These officers who were attached to this special presidential unit have to be questioned as to who gave authority for them to engage in politics within the SLRC premises.

They were paid not to do politics but to carry out their normal day-to-day work. By working for this special unit, the corporation work had been hampered. When questioned, Sales Executive Suresh Pallegama said that he had to carry out the work on the instruction of the then Director General,” sources said.

Meanwhile it is also revealed how the SLRC further incurred a loss of Rs. 31 million by not accepting the common candidate Maitripala Sirisena’s advertisement on the instructions of the then Chairman Wimal Rubasinghe.

According to file No. C 214/ 4960, the agreement SLRC entered into with Victory Advertising had been cancelled on the then Chairman’s instructions.

“Sales Executive Kosala Kotalawela and Assistant Sales Manager Buddhika Jayathissa said that all their attempts to edify the then Chairman on the importance of not cancelling the agreement reached with the Victory Advertising had gone to deaf ears and had further accused him for broadcasting the common candidates advertisements on earlier occasions. This is a state corporation and how could the Chairman prevent an income to the institution. Rubasinghe has deliberately thwarted the corporation’s financial regulation for petty politics,” sources added.

Meanwhile, it is also revealed how the payments for the controversial GI Pipes had been paid by a cheque claiming to be ‘urgent’ to the tune of Rs. 990,000.

“Deputy Director Sales Promotions Anil Sirimalwatte, in a letter stating ‘urgent’ to the Supplies Division, quotations had been taken through a fax from Dayasiri Hardware, Hewaheta, Kandy and two other quotations from Colombo.

“The cheque should go through the Supplies Division but in this instance the Accounts Department had dispatched the cheque straight to the supplier. This is surely a fraud and it is up to the Financial Crime Investigation Division (FCID) and the Bribery Commission, to which we have lodged complaints and have submitted all the supportive documents, to question the owner of the hardware in order to find out whether he received the cheque and to question the other officers who were involved in this scam,” sources claimed.

Chairman SLRC, Attorney-at-law Ravi Jayawardena said that it is up to the Bribery Commission to take the necessary action against the former Chairman and the Director General as they are no longer working at SLRC but charge sheets have been served to the others who were involved in these frauds. “Pending inquiry, we have served charge sheets to all others,” Jayawardena said.