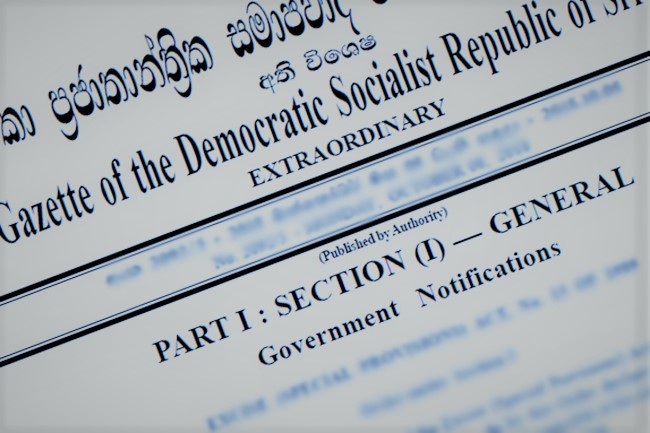 The most underlying principle for establishing processes of decision making through the legislature followed by the regulatory frameworks for decision making and implementation was a product of rational processes which recognised that not to do so would lead to unwelcome consequences and even to serious peril.

Priority given to the legislative process for making the basic laws by which people are governed took place over a long period of struggle against kings and warlords and others of that sort who had in the past tried to rule by making decisions and implementing them in any manner that they wished. In almost every country there were struggles to undo these methodologies employed by such individuals who held power at the moment and reestablish the systems by which the decision making and decision implementation are to take place. This was not merely in the European context, for example, when the power of the king was gradually taken away to exercise those powers through the Parliament, this rationalised process took place. In places like Japan where warlords dominated vast areas and did things as they wished, through long processes of struggle, rational systems of governance through known and approved processes took place. Similar changes also happened in China where the warlords dominated the scene and did whatever they wished in any manner that they wished.

The idea of legislation and those other means of imposing certain rules by way of gazettes and regulations, subject to the rules laid down by legislation, were adopted for the purpose of guaranteeing stability and to avoid disorder. At the heart of it is the belief that the consultative processes result in better decision making rather than arbitrary individual decisions of one single person or a small group of persons.

Every decision that is made in terms of administration affects not just that particular subject but also the entire system of administration. For example, the manner in which the taxes can be imposed or they could be reduced affects the entirety of the nation’s resources and the things that could be done through such resources. To authorise some action which has an effect on a particular thing or a particular person or a group without considering its consequences on others invariably leads to disharmony within the system of the administration of justice and has a harmful effect on decisions that affect the whole of the nation. This is particularly so when an arbitrary decision is arrived at without a process and announced without subjecting them to normal consultative processes, which in turn could lead to chaotic situations when the subject matter is related particularly to the financial sector.

The practice of ruling by gazettes

Ever since the adoption of the 1978 Constitution, there were many occasions when the legislative process was bypassed and fundamental reforms were introduced through gazettes. Around 1988, a gazette even created provisions for the burial of bodies without following the normal legal processes associated with such things. This enabled the killing of persons who were arrested while they were in police or military custody. Thus, a major methodology that was followed in order to enable enforced disappearances in Sri Lanka was the change of the laws in the country through gazette notifications.

Now, the same methods are being used in order to reduce or increase taxes, even violating the laws which prevail in the country. Thus, public criticisms have ensued to the effect that such reduction of taxes on certain imports for example has been done in order to favour a particular company or a particular group of persons. What is important more than the motive is the impact of such a decision on the entire financial sector in the country. Such arbitrary decisions deprive the nation of valuable incomes which are needed for national purposes including the maintenance of basic services for the people such as facilities for health, for education, the maintenance of reasonable prices for food as well as the monies needed to run an efficient system of the administration of justice.

While some persons could benefit from the arbitrary change of rules, the whole nation could suffer from the lack of adequate funding to be allocated to the basic services that are needed in order to maintain life, liberty and social security.

The entire system of governance in Sri Lanka is based on the primary assumption that the nation still belongs to the entirety of its people. In monarchies and also those places ruled by warlords, the idea was that the territories they controlled belonged to the king or the warlord of the area. It is that notion that has been replaced with the idea that the nation and therefore they have as their inherent right to participate in the processes of ensuring that the legislation they agreed to live by and the regulations that are created under such laws are done primarily for the benefit of the entire nation.

Once this principle is shattered, chaos would necessarily follow. The major discourse throughout the country now has been the possibility of economic collapse and social problems that would arise as a result of such a collapse. In fact, there are already complaints about malnutrition among children, increasing difficulties for people to run their families even at the survival level due to increase of prices of things, suicides that take place particularly among the poor who are unable to pay their small debts taken to generate livelihoods and the failure of the system of the administration of justice due to the fact that the adequate allocation of resources has not been provided for institutions like policing, the prosecution services, the judiciary and the prisons. The recent report about the prisons indicates the subhuman levels that prevailed as far as the conditions of the prisoners are concerned. In such a critical process, the observance of processes by which limited resources which are available for the country could be used for the country’s own benefit become even more urgent considerations.

The arbitrariness of imposing decisions through gazettes could only harm the population which is already in deep trouble.