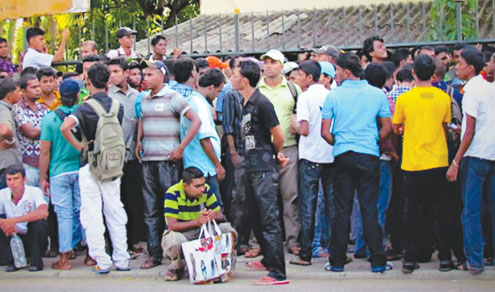 Image: waiting for the jobs.

Thursday August 24th 2017 –  Information on state recruitments and alleged irregularities or malpractices in government/ provincial councils, overseas travel details of politicians, unauthorised constructions, audits of school development societies, compensation payments for land acquisitions, information on school admissions, rental agreements entered into by public corporations and a variety of other information have been released to citizens by Public Authorities (PAs) in recent orders of the RTI Commission of Sri Lanka.

Since the operationalising of the RTI Act, No 12 of 2016 on February 3rd 2017, the first appeal hearing before the Commission took place in late April 2017.  This was when a resident of Hirana, Panadura requested information regarding permission given by the Panadura Urban Council to a developer to fill earth in a lowland area which had allegedly resulted in rainwater flooding surrounding lands. The Urban Council released the requested information on order of the Commission.

Since then, fifty four major appeals have been concluded (some involving several days of hearings) or are before the Commission for final decision apart from a considerable number of other orders/directives being issued. Pending appeals relate to among other matters reports of commissions of inquiries not released to the public and the assets declarations of politicians. Details of the appeals are available on the RTI Commission’s website . An innumerable number of letters/requests sent to the Commission by PAs as well as citizens are being processed.

It was pointed out that merely citing privilege was not sufficient. A burden rests on the Information Officer/Designated Officer to show in what way the request infringes on the privilege of the Provincial Council which was not satisfied in this instance. It was emphasized that these recruitments are paid out of public funds and that a citizen had the right to ask for this information. A similar order was issued in regard to permissions issued by the Governor regarding overseas travel of provincial councilors.

Other appeals included information released in regard to the detailed monthly accounts of the School Development Society (SDS) of Royal College, Colombo from March 2016 to 14 February 2017 (. Further, upon being noticed to appear before the Commission, the Information Officer and Designated Officer of the Elections Commission were ordered to release an internal circular containing an administrative instruction to elections officials.

In further appeal orders, directions were issued to the Road Development Authority (RDA) to release decision reports on compensation payments for landowners in the Hikkaduwa Divisional Secretariat whose land had been acquired for an ongoing road development project. The Education Ministry was directed to provide files containing details of the residences of children admitted to schools under the criteria that they are ‘children of persons working in Institutes which directly affect School education.’ General details of Grade One admissions to schools have also been provided.

After receiving public feedback and engaging in consultations with Public Authorities (PAs), the RTI Commission has meanwhile finalised Guidances on Pro-active Disclosures by Ministers under Sections 8/9 and Inquiry Rules under Section 42 (1) (b) to be gazetted.

These list budgetary and procurement information among information that must be proactively disclosed. For foreign projects which exceeds one hundred thousand US dollars or local projects that exceeds five hundred thousand rupees, mandated prior information that Ministers are required to publish includes regulatory approvals and environmental assessment reports. Further, preparation of report formats of PAs under the Act and the Commission’s Directives to PAs for Record Management under Section 7 are now at the final stage.

The Commission is pleased to announce the recruitment of its Director General, senior public servant Mr. Piyathissa Ranasinghe who was previously involved in the implementation of the Act in Sri Lanka. We are confident that his contribution to our work as the independent supervisory and appeal authority under the Act will be significant.