While activists are adamant that not only such compulsory testing but also picking out categories such as university students and schoolchildren is unacceptable, claiming that usually such hype comes around December 1 which is World AIDS (Acquired Immune Deficiency Syndrome) Day.

It is a rational voice among venereologists, however, which cleared the air and put the HIV situation in Sri Lanka in context, while also pledging the support of the Sri Lanka College of Venereologists in guiding the country towards the elimination of AIDS.

Explaining what ‘low prevalence’ means, Dr. Weerasinghe, a former President of the Sri Lanka College of Venereologists said that it is when the number of those affected by HIV/AIDS is below 1% among pregnant women and 5% among high-risk behaviour groups in a particular country.

Before dealing with the strong measures Sri Lanka has taken to curb the spread of HIV/AIDS, he turns to numbers and the recent concerns expressed over a rise in those affected by HIV/AIDS.

The cumulative (successive additions which bring about the current total) number of people detected with HIV/AIDS since the very first case in 1987, amounts to 2,241 as at the end of the third quarter (September) this year. (See graphic) 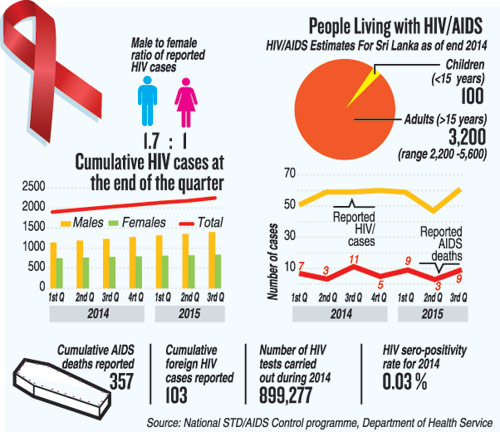 The so-called rise in numbers, according to Dr. Weerasinghe, could be due to two reasons. It may be due to new infections or the more likely possibility is that with extensive awareness and testing in place, more people are getting themselves tested, with old infections being detected now.
In 2014 alone, close to 900,000 tests have been carried out for HIV, the Sunday Times learns.

Referring to the modes of HIV/AIDS transmission in Sri Lanka, Dr. Weerasinghe details them as occurring through blood transfusions, from mother-to-child and a majority, about 95%, through sexual interaction.

What has Sri Lanka done to stymie HIV transmission?

Not a single blood unit is transfused without screening for HIV, points out Dr. Weerasinghe, with the latest virus screening technology covering both antigens and antibodies and drastically reducing the ‘window period’ which was earlier six months, to a few days and few weeks. (The window period is the gap between potential exposure to the HIV infection and the test giving an accurate result.)

The elimination of mother-to-child transmission of HIV has been carried out parallel with the battle against syphilis, it is learnt.

Usually, there are between 350,000 to 400,000 pregnancies each year and in 2014, 168,221 mothers were screened, with five being detected with HIV and administered anti-retroviral therapy, successfully preventing the virus from being transmitted to their babies.

The target is to screen all pregnant women for HIV by the end of next year, in keeping with global efforts to have an AIDS-free generation.
Lastly, this Venereologist deals with the commonest and main mode of transmission – sexual transmission.

With an active network of STD/AIDS Control Clinics, the main emphasis with regard to the prevention of sexual transmission of HIV was the promotion of condoms until 2011.

But from that year, peer-led ‘targeted’ interventions were carried out among the four vulnerable groups of female sex workers, men who have sex with men (MSM), beach boys and drug users who have been categorised as the ‘drivers’ of the HIV epidemic.

In the latter category, peer-leaders were trained on preventing the spread of HIV while also getting their support in encouraging members of these vulnerable groups to get themselves tested, he added.

The success of Sri Lanka’s HIV prevention and control programme has been commended in the World Health Organisation’s ‘Report on global sexually transmitted infection (STI) surveillance 2013’.

Singling out Sri Lanka and Cuba, the report sketches what achievements are possible, even in settings with limited resources, in the implementation of comprehensive STI control interventions.

“Countries such as Cuba and Sri Lanka offer a basic set of quality STI services that are widely accessible and include outreach to high-risk settings……Common to these examples are large and sustained STI reductions over time and a strong commitment to prevention and control of HIV.”

The three critical areas covered, according to the report, are availability and accessibility of basic STI services of good quality to all who need them; urgent steps being taken to reduce high-incidence transmission in sex work and MSM networks; and reliable incidence and prevalence data from high-risk and general population groups being routinely monitored to guide programme efforts.

It states: “When these three pieces come together, STI transmission can be slowed rapidly, bringing multiple benefits in terms of averted complications and fewer HIV infections. The experience of Sri Lanka can be described all the way from the 1970s to the present.

“STIs have been in decline over decades and were already low in the 1980s when HIV emerged globally. Continued strengthening of STI control and further declines helped to avert emergence of an HIV epidemic despite multiple factors, including an uncircumcised male population and a protracted civil war, that have facilitated growth of HIV epidemics in other countries.

“STI control efforts in Sri Lanka are organised around STI clinics at district hospitals and linked to strong primary health care services in communities, such that STI services include both clinic- and community-based activities.”