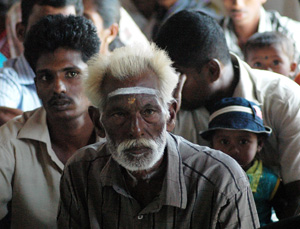 More than two years after Sri Lanka’s decades-long civil war officially ended, returnees to remote villages face tough times and uncertain futures, despite governmental and international efforts at reconstruction.
“Everything that we had earned in 50 years, we lost in months,” Supiah Arumugam, 52, and a father of two, told IRIN. Arumugam returned to his home village of Thunukkai, deep in Mullaitivu District in the island’s north and once under the control of the Liberation Tigers of Tamil Eelam (LTTE), in March 2010. He and his family had fled the violence two years previously.

Seven months after the government declared victory over the LTTE in May 2009, the Ministry of Economic Development launched the Northern Recovery Project in December 2009 to accelerate development in the conflict-affected Vanni. Of some 120,000 resettled families in the Vanni, the ministry estimates about 29,000 have directly benefited from projects, while 56,000 families have benefited indirectly.

But families such as Arumugam’s are returning to a small fraction of what they had and reconstruction is a slow process.

Before the war, Arumugam had a large farm with hundreds of livestock. Since his return, he has battled to find an income and his belongings are few: “I don’t have a house, only eight chickens and a bicycle.”

Like most, he says he has survived the past 15 months on the US$230 initially given by the UN Refugee Agency (UNHCR) through the government to set up semi-permanent living quarters. Supplemental cash-for-work programmes coordinated by the government and funded by the World Bank also helped pay the bills for six months. “Life is a struggle,” he said.

Such cash-for-work programmes have been the biggest income generator for the region in which approximately 1.6 million days of work have been funded, the Ministry of Economic Development said. Each participant earned $5 a day and a meal. The World Bank allocated $5 million and 300,000 days of work to such programmes. USAID also had a large cash-for-work programme, which helped about 7,000 families with $250 to meet their basic needs.

According to the UN’s latest Joint Humanitarian and Early Recovery Update, released on 24 June, 63 percent of returnees live below the poverty line. In the Mullaitivu District, 12 percent survive on less than $0.50 a day, while in the adjoining Kilinochchi District that figure rises to 26 percent.

Thunukkai is about 20km from the nearest highway, the A9, which has been the largest development project undertaken so far. By contrast, the road to Thunukkai is still unpaved, dusty and bumpy. According to villagers, the bicycle is the main mode of transport.

In the nearby village of Allankulam, 62-year-old grandmother Selvanayagi Chellathurai now toils with five other women on a small vegetable plot to ease the financial burden of her extended family. She told IRIN that big development work had not directly benefited them. “We still spend hours just to get to the main town. There are electricity power lines, but we can’t afford connections,” she said.

“At least before the war erupted, we had some kind of habitable house and a well for water. Now all that is gone,” Chellathurai said. She lives with 12 returnees in a one-room structure built of mud and tin sheets.

Many villagers echoed her sentiments, that at least before the mass displacements of the final days of the conflict, their lives had a sense of stability primarily because peace had prevailed in their village for more than a decade.

And while donor officials say development work is slowly reaching interior villages such as Chellathurai’s, the task of developing the war-hit Vanni remains enormous and slow.

“A detailed assessment of the full needs of the returnees is yet to be completed,” said Seenithamby Manoharan, a senior rural development specialist with the World Bank. “As such, the limited development projects that are being implemented in selected areas will not meet the entire needs and expectations of the people.”

Arumugam’s family moved 11 times and fled more than 100km before they settled on a northeastern shore. During the last days of the war, Arumugam’s only son was forcibly recruited by the LTTE. He was soon captured and has been in government detention since. That same week, Arumugam’s son-in-law died in a shell attack while looking for food. “There was nothing left of him, only body parts.”

But despite acute poverty and hardship, returning villagers agreed on one thing – they want to stay put.

“This is my land, I want to live and die here,” Arumugam said.
irinnews