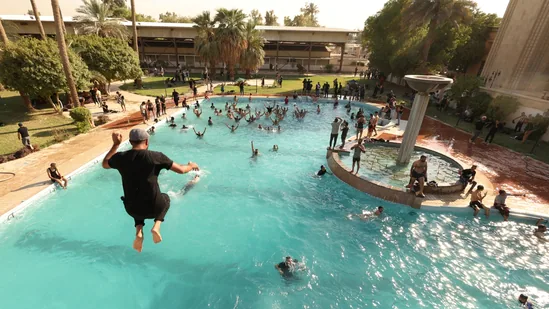 Violent protests broke out in Iraq’s capital city of Baghdad after Iraqi Shi’ite cleric Muqtada al-Sadr announced he was quitting politics on Monday. In what appeared like a rerun of the Sri Lanka crisis, protesters in Baghdad broke into the Green Zone and stormed the Republican Palace, the power centre of the country. Photos and videos were circulated online showing demonstrators cooling down in the pool, akin to the images that went viral from Colombo in Sri Lanka when angry demonstrators took over President Goatabaya Rajapaksa’s palace in agitation against political and economic crisis.

At least 15 protesters have reportedly died in the protests in Iraq so far. Followers of al-Sadr took to streets in Baghdad as the night fell, hours after the news of the Shia spiritual leader announcing he was stepping down. Saraya Salam, a militia aligned with al-Sadr, clashed with the Popular Mobilization Forces security group. More military reinforcements were sent to the presidential palace as the followers of Muqtada al-Sadr tore down cement barriers outside the government building and forced-entered the palace and availed all luxuries available, including the swimming pool.

A small force from the special forces division and Iraqi Army’s 9th Division also joined the operation to contain the situation around the presidential palace. Security forces dropped tear gas bombs and stun grenades to contain the protests in the Green Zone, according to local reports.

The crackle of machine gun fire echoed throughout the city’s central area, while Sadr’s supporters and Tehran-backed units reportedly also hurled stones at each other. An immediate curfew was put in place right after with the Palace security unable to control the mass of demonstrators.

According to a Russia Today report, Al-Sadr’s decision to quit politics came as a reaction to the retirement of Shia spiritual leader Ayatollah Kadhim al-Haeri, who considers many of al-Sadr’s supporters as his followers.

Pictures of thousands of Iraqi protesters who entered the country's presidential palace.

Like what happened in Sri Lanka, they are swimming where the president used to swim. These angry people support the leader of the main opposition in the country, Muqtada al-Sadr. pic.twitter.com/eLNcm10Alr