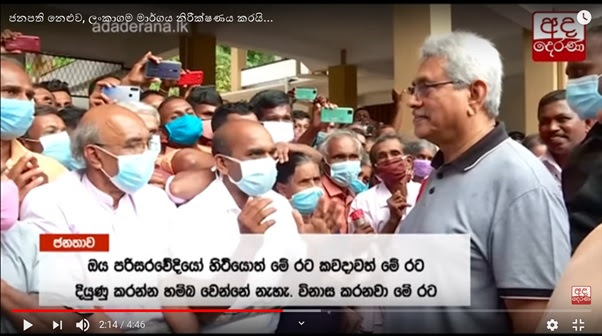 (INFORM) This report provides some general trends and details of some significant incidents related to the repression of dissent in Sri Lanka in the month of August. This report was prepared mainly based on the information reported in mainstream and social media.

The report is based on 18 incidents related to repression of dissent in Sri Lanka. Section 1 includes the Executive summary which provides an overall summary of the report. Section 2 describes the methodology. Section 3 describes the socio-political context and some trends relating to human rights situation in Sri Lanka during the month. Section 4 provides a thematic summaries of the incidents described in the report. This month’s report is organized under 4 themes: (4.1) Repression of civil society and NGOs, (4.2) Repression of state officials, (4.3) Legal, policy and institutional changes and (4.4) other incidents.  Section 5 provides updates on previous cases relating to dissent with a focus on legal updates reported in media. Section 6 provides a statistical analysis of the incident included in the report looking at geographical location, ethnicity and gender of the victims, types of violation, category of victims, and perpetrators.

“If those environmentalists are there, this country cannot be developed. (They) destroy this country” said person in the crowd to the President who visited Lankagama where a road a development project across Sinharaja world heritage forest was carried out with the involvement of military without conducting a proper environmental impact assessment. This news was telecasted and shared online. See Video: Ada Derana

Context:  Sri Lankan Parliamentary General Election was held on 5th August 2020. Sri Lanka Podujana Party (SLPP) led by President Gotabaya Rajapaksha won the election with an overwhelming majority winning 145 seats almost two thirds in the 225 member legislature (1). The cabinet of ministers, state ministers and other portfolios were appointed. Continued militarization, and Sinhala Buddhist majoritarian ethno nationalism were general trends. Focus of public discourse and media was much on election and post-election situation. Several incidents of election violence were reported before and after election. There was a crisis in the AJBP political party led by ultranationalist monk Gnanasara after they have won a single seat in the Parliament. A member of the party – a monk claimed that he was kidnapped by a group led by Gnanasara Thero.  Protest in the Colombo port stopped after they had a discussion with the PM. Ten thousand unemployed graduates were given jobs. A group of unemployed graduates who were initially disqualified protested and they were included in the program after President had a brief conversation with them. However this was not the case of protests organized by relatives of the disappeared in Batticaloa who faced repression at the hands of Police. A web journalist was arrested under the charges of publishing news articles that negatively impact the judiciary and the judicial hierarchy. Media organizations pointed out the lack of respect of media ethics in the case, but also said that “they believe this incident will not develop into a process of positive analysis of court decisions, exploring the work of court decisions, freedom to report its irregularities will be deprived.”

Repression of NGOs and civil society:    Repression of environmentalists, Policy changes to restrict activities of NGOs, Possibility of banning Tamil diaspora human rights groups were key concerns arising from the incidents related to repression of civil society and NGOs in this month. Police made a surveillance visit to a house where an environmentalist stayed, and asked to fill a form that includes information such as visitors, and their vehicle numbers. A son of the PM sent a letter of demand to another environmentalist, while anti-environmentalist rhetoric was expressed in mass media and social media. NGO secretariat was again gazetted under the Ministry of Defence. This may lead militarization, fear and increased surveillance of civil society activities by military, restricting freedom of association. Giving evidence before the PCoI, a key suspect of journalist Prageeth Ekneligoda disappearance case claimed that two well-known human rights activists of Tamil Diaspora were former LTTE members and delisting them from terrorist groups was a mistake by former government.  Last month media reported that the government has been considering to relist Tamil Diaspora activists and groups as terrorism related groups and individuals. 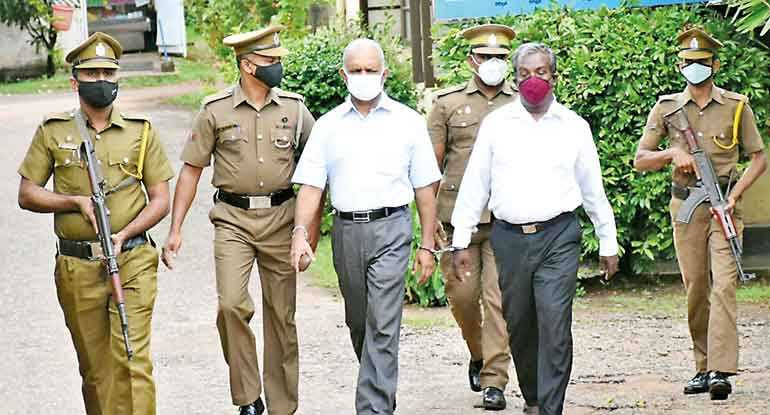 Former Criminal Investigation Department (CID) Director Shani Abeysekara and Sub Inspector (SI) Mendis were further remanded. Photo courtesy : Kushan Pathiraja FT.lkA State Minister speaking in parliament, denounced the members of office of Missing Persons (OMP) as having associations with Tamil diaspora and advocated, made statements against Sri Lankan army in relation to war crimes allegation and that hence, financial allocation to OMP should be curtailed. A sub-inspector who worked in key investigations occurred during former Rajapakse government was arrested. He was charged with fabricating evidence along with former CID director Shani Abeysekera who was also arrested previous month. A drug dealer who has threatened Police officers of anti-corruption unit of Mount Lavinia Police in Colombo District was arrested. Another Police officer was assaulted during raid in Balangoda in Ratnapura district. 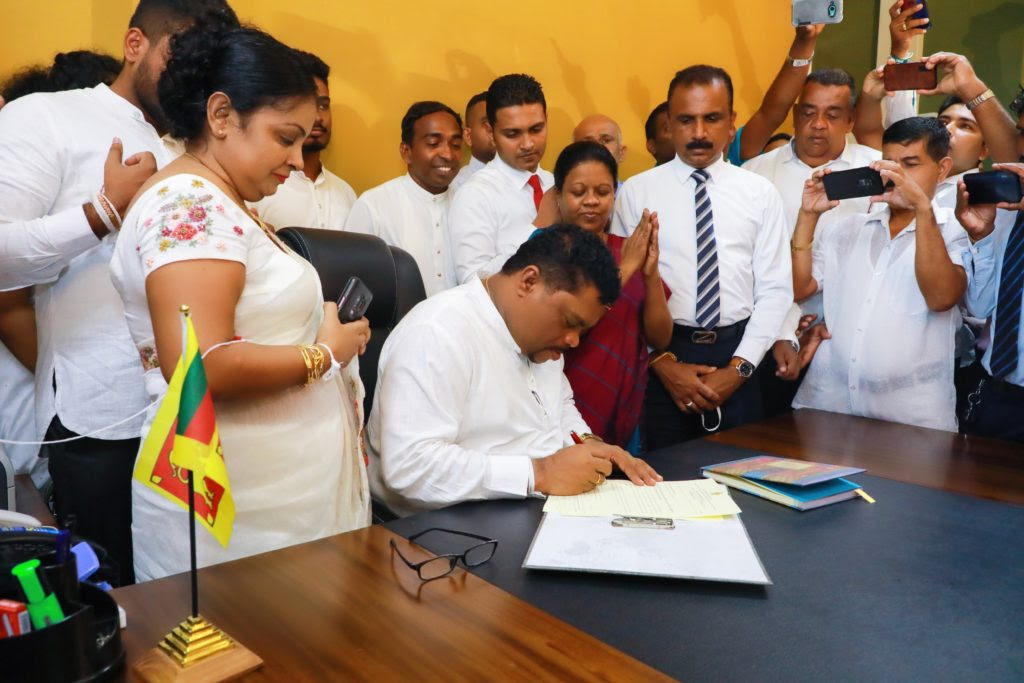 President addressing a rally in Badulla stated that he is not afraid of the protest referring to then ongoing protest in the Port city, and criticized it as a baseless act conducted with the objective of causing inconvenience to the public. A court order was issued against a leader of families of enforced disappearances who organized a protest march on the international day against enforced disappearances. Young Tamil journalist in Jaffna was assaulted. A statement made at the parliament about Tamil people’s history and heritage was asked to be expunged from official hazard records, and online hate speech comments were made against the MP due to the statement.

Statistical analysis:   There are 18 incidents in this month’s report, a lesser number of incidents compared to the previous months. This may have been resulted by the media focus around the election and as we have refrained from including election related incidents in this report. 4 incidents were reported from Colombo, 3 from north and east provinces, 4 from other areas. In case of 6 incidents (33%) geographical location was not applicable which were mainly legal, institutional and policy changes. 2 incidents of physical attacks, an arrest, a verbal threat, 3 problematic written or verbal statements that could negative impact on dissent, a court order were also reported. All the victims (excluding events that affected both men and women) were men in general. 3 incidents were related to Sinhalese, while 4 incidents were related to Tamils. 5 incidents affected civil society organizations and activists. 2 were concerning protestors. 4 were about state officials. 3 incidents were legal and policy changes that affected ethnic minorities in general, 1 incident similarly affected women in general. In 6 cases, President and the central government were allegedly responsible. In 2 incidents it was other politicians. In 3 it was the court, while government institutions and officers were allegedly responsible in 2 incidents. In general persons and bodies linked to state were responsible for more than 70% of the incidents.

Giving evidence before a Presidential commission of inquiry, a retired army intelligence officer said that abduction of journalist Keith Noyahr was ploy deployed by former government, and was acted and filmed by CID officers. He also said he was forced by CID officers to be a state witness. Retired army intelligence officer also said that CID officers influenced him to give a false statement that abduction was done by him on the instructions of current President Gotabaya Rajapakse (former defence Secretary). In the case of Hejaaz Hizbullah the magistrate ordered present copies of all the statements they recorded from the witnesses after defense counsel alleged that CID have only filed selective statements before the court. The Magistrate also made an order the Deputy Inspector General of Police Western Province to submit a report on the investigations as to how confidential statements made in the Magistrate’s Court were leaked to the media. Human rights lawyer Hizbullah and social media writer Ramzy Razeek were in detention for more than 140 days by the end of August. Razeek was later granted bail on 17th September.

Read the report as a PDF: Repression of Dissent in Sri Lanka _Aug2020