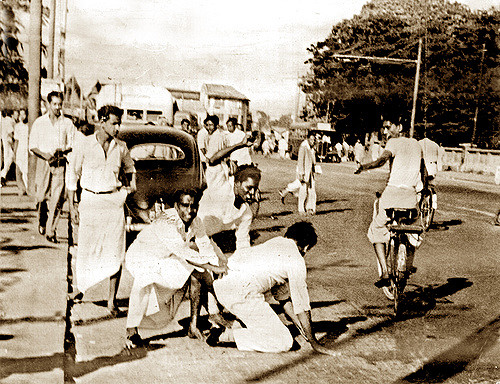 The terrorist attacks that took place on the 21st Sunday 2019 caused grave loss and damage to many Sri Lankans. The multiple explosions island wide, including those that followed over the next few days rendered hundreds of victims dead, injured or disabled, creating negative economic, social and even psychological impacts on the lives of those affected. The riots and chaos that took place a few weeks later added to this, leaving the homes and shops of many innocent civilians destroyed to ashes.

It is unfortunate and tragic that the incidents that took place this year are not the first of its kind. Explosions and riots have continuously marred the history of our country, trapping its victims into a cycle of violence.

History of conflict in Sri Lanka:

Most often these incidents are not completely organic or instigated by the citizens themselves. They are a result of a complex web of social manipulations, extremist agendas, and political influences. The victims of these machinations are almost always innocent civilians.

Psychological trauma could affect victim’s social relationships, damage to homes and property as well as injury or physical disability would impact their livelihood, and the death of family members who were the primary wage earners would push these victims into immediate economic crisis or even poverty.

In the face of such damage to life and property, it is the duty of the state to support these victims with rebuilding and restoring their lives to normalcy. While their loss and pain cannot be erased, every effort must be made to ensure that these citizens are provided with the best possible remedies to recover and move forward. This sheds light on the importance of reparations now more than ever.

Violence and tragedy sometimes cannot be evaded, but the response to such unfortunate incidents and how we rise above it as a nation is what will truly define Sri Lanka. It does not matter how long it has been since the end of the war or the how many years have passed since the many conflicts in our country’s past. Even today, victims continue to suffer the harsh consequences of the violence they faced decades ago.

Reparations in that case, is timely as much as it is necessary.

The office for Reparations is an independent authority tasked with formulating, designing and implementing reparations policies in Sri Lanka. The office is responsible for providing individual and collective reparations for victims of all past conflicts.

At this point in time for Sri Lanka, the setting up of this office, supporting its functions, and creating awareness among victims regarding the services it offers, is a vital step taken in the right direction.