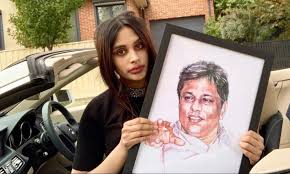 Ahimsa Wickrematunge, the daughter of late journalist and Editor Lasantha Wickrematunge, has appealed to the Police Commission to block the appointment of SSP A.R.P.J. Alwis as Director of the Criminal Investigation Department (CID).

Wickrematunge releasing a statement said that Alwis was ordered to be arrested in connection to her father’s murder and he was unsuited to such a high office.

The full statement is given below.

My father, Lasantha Wickrematunge, was murdered in Attidiya on 8 January 2009. His murder is being investigated by the CID. In October 2019, the CID reported to the Mount Lavinia Magistrates Court that in 2010, the then Officer-in-Charge (OIC) of the Terrorist Investigation Division (TID) SSP A.R. Prasanna J. Alwis, had suppressed evidence and shielded suspects in order to screen my father’s murderers from punishment. Such crimes are each punishable by up to seven years in prison.

The CID were ordered by then Acting Inspector General of Police (IGP) C.D. Wickremaratne to arrest Alwis and produce him before the Magistrate. After the Presidential Election, the Acting IGP suddenly changed his mind. SSP Alwis was never arrested or produced.

Instead, on 21 May, the NPC approved the Government’s request to appoint SSP Alwis as the new CID Director. Months after ordering his arrest as a murder suspect, Mr. Wickremaratne tricked the Commission into putting SSP Alwis in charge of the CID.

I request that the NPC urgently take steps to remove SSP Alwis from any role at the CID and to ensure that the CID arrests Alwis and produces him before court. I also urge the Commission to seek an explanation from Mr. Wickremaratne over his role in aiding SSP Alwis to evade arrest and become head of the CID, and on the legal basis by which he is purporting to act in the office of IGP without the approval of the Constitutional Council.

The independent Police Commission should not be remembered for rubber stamping the appointment of a murder suspect to the head Sri Lanka’s apex detective agency.