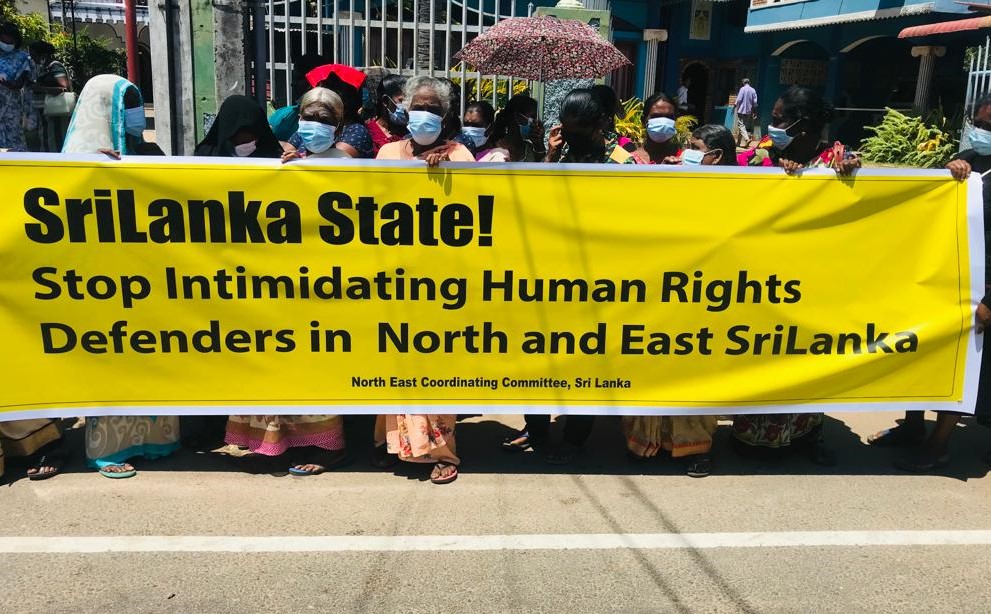 Sri Lanka remains on a watchlist of countries that have seen a rapid decline in civic freedoms. Despite the removal of the Rajapaksa regime, brought about by mass protests – amid the country’s worst economic crisis in decades – the new President Ranil Wickremesinghe has continued the governments’ crackdown on protesters and activists.

Following Wickremesinghe’s election, sweeping emergency powers were once again imposed to restrict protests and clamp down on protesters. Security forces used excessive force to remove parts of a rolling peaceful protest site in front of the Presidential Secretariat in Colombo. Protesters have also been harassed, arrested and detained.

The new watchlist is released by the CIVICUS Monitor, an online platform that tracks the latest developments to civic freedoms, including freedom of expression, association and peaceful assembly, across 197 countries and territories. Other countries included on the list are Guatemala, Guinea, Serbia and Zimbabwe.

On 17 July 2022, emergency regulations were imposed giving sweeping powers to the police and the armed forces to search and make arrests of ‘suspects’ without due process safeguards. UN human rights experts have condemned the “extensive, prolonged and repeated use of state of emergency measures” since April 2022 by the authorities to crack down on peaceful protesters.

In the early hours of 22 July 2022, a coordinated joint operation by the Sri Lankan military, police and special forces forcibly removed parts of the three-month-long ‘Gotagogama’ rolling peaceful protest site in front of the Presidential Secretariat in Colombo. Security forces severely beat protesters and lawyers and removed many tents from the pavement. At least 50 people were injured andt nine protesters were arrested and granted bail on the same day. At least 14 protesters were hospitalised. Materials and electronic devices belonging to protesters were destroyed.

“The Sri Lanka authorities must investigate all human rights violations committed by security forces during the state of emergency including unlawful arrests, excessive use of force on protesters and the brutal crackdown at the protest site at Galle Face in July. Any pending charges against those arrested for peacefully exercising their rights must be immediately dropped. These repressive actions clearly do not meet Sri Lanka’s obligations under international human rights law”, said Josef Benedict, Asia researcher for CIVICUS

The security forces have sought to harass, arrest or detain activists and protesters seeking political reform and accountability for the country’s economic crisis. Journalists have also been targeted for their reporting on the crisis and protests.

On 25 July 2022, the Colombo Magistrates’ Court issued a travel ban on Father Jeewantha Peiris, a Catholic priest who had been prominent in the protests, and several others. Leading protester Dhaniz Ali was arrested by the police while trying to leave for Dubai on a flight on 26 July 2022. On 27 July 2022, unidentified men in civilian clothes abducted Veranga Pushpika, a former student activist and journalist who had also been active in the protests, from a bus in Colombo. Police did not disclose his whereabouts for several hours before acknowledging his arrest.

On 18 August 2022, police intervened to disrupt a protest by members of the Inter University Students’ Federation (IUSF) in central Colombo by firing a water cannon and tear gas at them. The crackdown was followed by the arrest of members of the IUSF. According to reports, 20 people were arrested and 16 of the suspects were released on personal bail after being charged with unlawful assembly and obstructing the duties of police officers by blocking the road. One of those detained was human rights defender Chinthaka Rajapakse, the moderator of the Movement for Land and Agricultural Reform (MONLAR), a human rights organisation focused on land rights, protection of natural resources and the environment.

Three of those detained around the student protests including Wasantha Mudalige, the convener of the IUSF, Hashantha Jeewantha Gunathilake, member of the Kelaniya University Students’ Union and Galvewa Siridhamma Thero, the convener of Inter University Bhikku Federation, have been detained under the draconian Prevention of Terrorism Act (PTA).  The government has used the PTA to target and harass minorities, activists, journalists and critical voices.

On 9 September 2022, the National Organiser of Youth for Change (YFC), Lahiru Weerasekara was arrested by Maradana police as he was returning on his bike from a peaceful protest at Galle Face.

“The arbitrary arrests or harassment of activists and protesters must end and those detained for exercising their right to the freedom of peaceful assembly must be unconditionally and immediately released. President Ranil Wickremesinghe should also immediately end the use of the draconian counterterrorism law to lock up activists for long periods ” added Benedict.

The violations against protesters are part of a broader trend of attacks on civic space under the Rajapaksa administration that civil society has documented in recent years including the targeting of activists and critics, use of the notorious Prevention of Terrorism Act (PTA), surveillance, intimidation and harassment of Tamil war victims and families of the disappeared, journalists and civil society organisations, particularly in the North and East, and failure to hold officials accountable for conflict-era crimes under international law.

Sri Lanka is currently rated ‘obstructed’ by the CIVICUS Monitor. There are a total of 42 countries in the world with this rating (see all). This rating is typically given to countries where civic space is heavily contested by power holders, who impose a combination of legal and practical constraints on the full enjoyment of fundamental rights (see the full description of ratings).

CIVICUS is a global alliance of over 10,000 civil society organisations and activists dedicated to strengthening citizen action and civil society throughout the world.