Sri Lanka religious police : Lack of a clearly defined mandate for the special unit is worrying 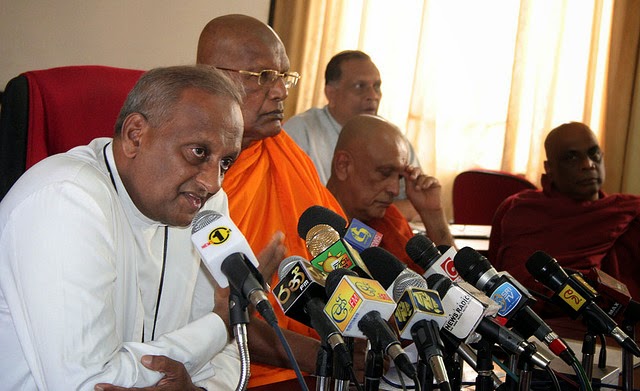 A Reflection on religious freedom with justice by Bishop Duleep de Chickera
Puzzling Decisions and worrying trends
The recent government decision to appoint a special police unit to deal with inter-religious conflict adds to the prevailing confusion on the freedom of religion and the rule of law. While the decision implies seriousness in arrestingthe current religious tensions, the government’s reluctance to achieve this very aim through the existing and adequately mandated and deployed police force,is puzzling.
More seriously the lack of a clearly defined mandate for the special unit is worrying. Given the prevailing apathy towards the freedom of religion and the rule of law, no mandate, could easily evolve into an open mandate with potential to further aggravate the crisis. For instance, if the special unit were to investigate random complaints on “unlawful” places of worship and “unethical conversions”, this could eventually be usurped to criminalise legitimate religious gatherings and voluntary conversionsthrough conscience; characteristics of any healthy democratic society.
The peoples’ consciousness
These trends and possibilities must bring our leaders and people to their senses. The harassment of minority religions has gone unabated for too long for reasonable people to believe that the authorities are unable to bring the situation under control. This inaction must consequently point to some electoral expectation and soon, if not already, the people will realise that if some are allowed to be harassed for electoral gain today, others will similarly be allowed to be harassed for electoral gain, tomorrow.
Democratic obligations for all
It is therefore necessary for people of all and no religious persuasions, either out of self-interest,social interest, or both, to urge the authorities to do what they are mandated to do. This is to protect persons and property and restrain, and where necessary prosecute, all who violate the law, without exception.

In modern democratic states this amounts to ensuring the existence of a professional and independent judiciary, and that the police in particular are equipped to do their work impartially. It also requires that when this work lacks competence or demonstrates bias, those entrusted with the interpretation and implementation of the rule of law, are to be held responsible.

When, in such an ethos of law and order, the insensitive or extreme religious behaviour and practices of some disturb the peace or infringe on the rights of others, remedial negotiations with assistance from moderate religious leaders is a wise first option. If this fails the law should be applied without exception. Under no circumstances should fear or suspicion of some exclusive elements, impose restrictions on the religious freedom of those who adhere to their religious obligations within the framework of the law and social trust.
The fruit of justice
If such a climate determined by the rule of law and good intention can replace the current climate of hostility, fear, grievance and apathy there will be no need for a special police unit, religious freedom will abound for all and our beloved Sri Lanka will move towards a welcoming democratic state.

With Peace and Blessings to all
Bishop Duleep de Chickera