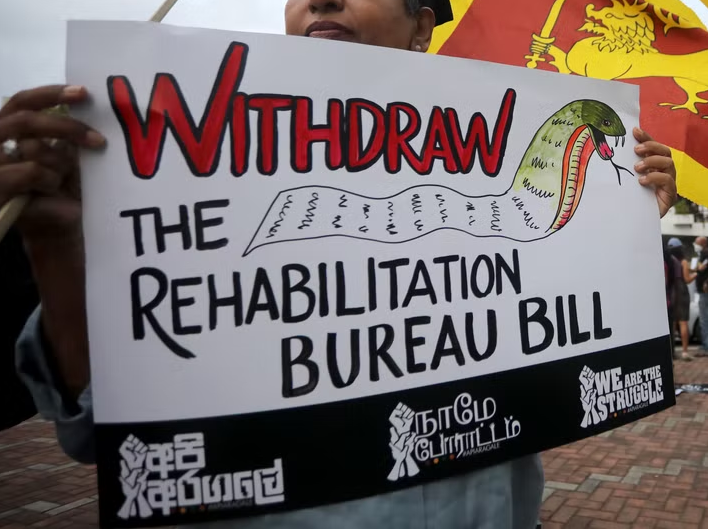 ECONOMYNEXT – Sri Lanka’s Supreme Court has determined that a controversial rehabilitation bureau bill is, as a whole, inconsistent with article 12 (1) of the constitution and may therefore be enacted only by special majority, Speaker of Parliament Mahinda Yapa Abeywardena said.

Announcing the verdict in parliament Thursday October 20 morning, Abeywardena said the bill, titled ‘Bureau of Rehabilitation Act’ may be enacted by special majority as required by Article 84 (2) of the constitution.

Article 12 (1) of the constitution reads: “All persons are equal before the law and are entitled to the equal protection of the law.”

According to the determination by the apex court, the inconsistency with article 12 (1) will cease if all references to ‘ex-combatants’, ‘violent extreme groups’, and ‘any other group of persons’ are deleted from the bill, and if the bill is limited to rehabilitation of drug dependent persons and such other persons as may be identified by law.

Opposition Tamil National Alliance (TNA) legislator M A Sumanthiran welcomed the decision. Minutes after the decision was announced by the Speaker, Sumanthiran tweeted that the cabinet of ministers that authorised the bill should be rehabilitated. ( Tweet was later deleted by the author – SLB)

In September, the Centre for Policy Alternatives (CPA) and its Executive Director filed an application in the Supreme Court challenging the constitutionality of the bill.

In the gazette that was published that month announcing the bill, it was referred to as as “an act to provide for the establishment of a bureau to be called and known as the bureau of rehabilitation; to regulate its powers, duties and functions and to provide for matters connected therewith or incidental thereto”.

Opposition lawmakers, civil society activists, human rights lawyers have questioned the legality of the bill and expressed fears that it could be used against protestors. (Colombo/Oct20/2022)