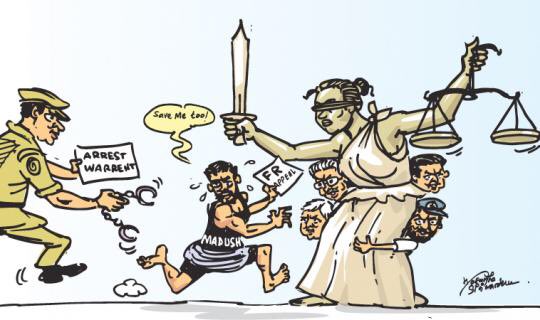 A well-functioning legal system can be measured by its response to daily crimes and complaints. This is a much better test in fact, rather than a country’s constitution (in Sri Lanka’s case, the 1978 constitution still remains a major barrier to the functioning of a legal system), or statutes, or judicial presence, all of which are often portrayed as an indicator of a good system.

Several such crimes and incidents occurred in the last few days, which did not receive their due publicity and national attention. It was reported from Rawathawatha, Moratuwa that when some drug dealers were arrested and taken for questioning, quite a sizable number of people gathered on the roads and congratulated the police by clapping and cheering. This unusual response to a police arrest indicates the anxiety of people experiencing the ill effects of illicit drugs on their children and loved ones. The clapping and cheering is the people’s appreciation at the rare concrete action taken by the government to address this particular social ailment.

In another incident, some people traveling in the expensive and elitist Defender, driving at unusual speed and without respecting road rules and traffic lights, knocked down the OIC Traffic Officer of Borella. With the vehicle being a Defender, and the subsequent attempt to shirk responsibility, there is a general apprehension that those involved in this crime have high political connections. Meanwhile, after struggling for nine days in Colombo National Hospital’s ICU, the OIC passed away. The funeral was attended by the Honourable President, Honourable Prime Minister and Honourable Speaker, among others. Two million rupees are reported to have been given to the OIC’s widow, and five hundred thousand each for his underage children. It may be asked whether this sum represents the value of the deceased OIC.

The OIC, like other officers engaging in risky operations, needs to receive the same attention as those soldiers and others who are killed during the war. They both do their duties under the risks for their lives, and this should be recognized. The lifelong payment of their salary to their families should be the minimum done for those officers who die in duty.

What is important here, however, is the people’s apprehension to the incident, and the seeming protection enjoyed by those driving the vehicle. As yet another instance of reckless driving occurring throughout the country, leading to many injuries and deaths, the accident indicates general lawlessness in the country. The political protection and impunity enjoyed by the alleged perpetrators is yet another indicator of the lawlessness prevailing in the country.

A more shocking incident happened around the case of KARANNAGODA VS CID, a fundamental rights application petition to stop the possible arrest of KARANNAGODA. It has been pointed out that once the investigation into the crime is over, and the suspect is to be brought before the court, he should be arrested. In the case of an ordinary citizen, the arrest happens even before the inquiries begin or are completed. In this case, however, it has been reported in the Colombo Telegraph and other reputed publications, that it was the intervention of the President himself, which prevented such arrest through his intervention with the Attorney General’s department.

It was revealed that the two officers to be prosecuted on behalf of the state have been visiting the President asking for a place in the Supreme Court. This recalls Mr. Mohan Peiris, who was disgracefully removed from the Chief Justice position in 2015, and thereafter visited the President twice, asking the President keep him in the same post, and that he will do whatever the government and the President wants.

The two officers, in this case, are charged with abetting the crime of abduction and murder. Their status as war heroes in a war that ended in 2009 cannot absolve them from responsibility or equality before the law. The world over, there are numerous examples of war heroes and national heroes who have been subsequently punished for crimes committed. The very notion of equality before the law recognizes no special place for any heroes.

The accusation that the President has influenced the Attorney General’s department on this issue needs a clear answer from the President or his office. This amounts to the head of state destabilizing the legal system in a very serious manner.

All the above incidents point to a serious crisis of the state. A crisis of the state is far more consequential than an economic or social crisis. A well-functioning state is essential for any possibility of resolving other crises. However, the country’s media and others are largely silent on these issues. Living inside a sinking ship, they listen to the political speeches of how prosperity and economic progress was brought to the country. Each day proves the folly of this situation, but there is hardly any attempt to correct it. In 2009, the Asian Human Rights Commission published a book entitled, Sri Lanka’s Legal System as The Phantom Limb. Phantom limb refers to the belief of an amputee that his lost limbs still exist. They complain of pain in those missing limbs. In Sri Lanka’s current legal system, continuing the rituals and filing fundamental applications is simply addressing a phantom limb that does not even exist. The only way forward is to recognize the missing limb, and then move ahead