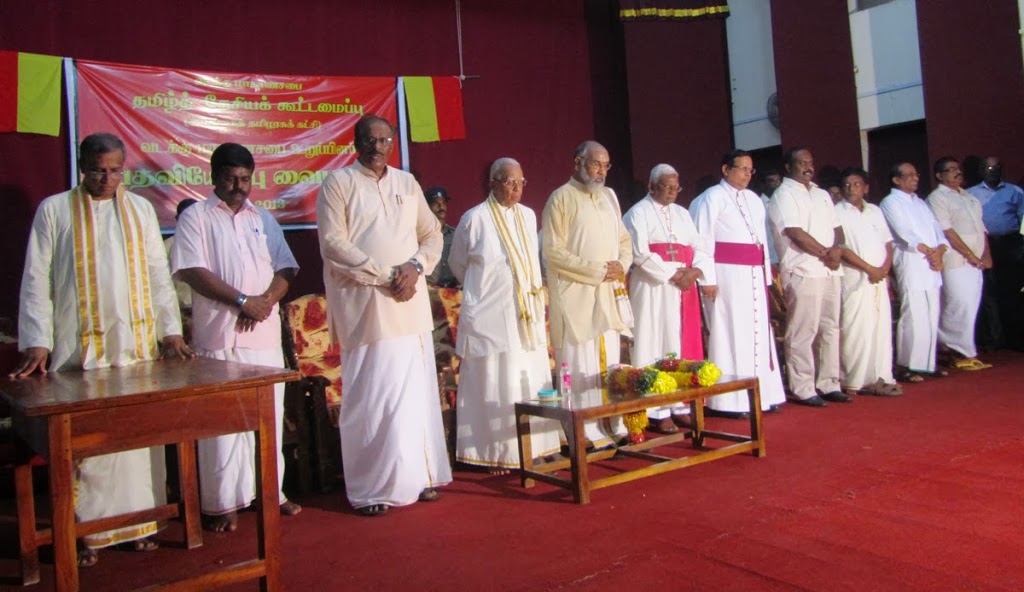 The time for euphoria is past, celebrations must wind down. A carousing Tamil gentleman of my vintage and neighbourhood has drunk his whisky cellar dry. The serious stuff is getting started, so time to buckle down. The mouths of Jonas at home and in the diaspora who pressed the TNA to boycott the elections are stuffed with sludge by the scale of victory and inspiring voter turnout.

I wrote in a newspaper column in August that the real tussle would start after the elections since TNA victory per se was assured though no one foresaw a landslide of this magnitude. In that piece I drew up a five point list crucial for Vigneswaran, the new Chief Minister (CM), and the Northern Provincial Council (NPC). It is more relevant now than at that time, so I reproduce it without change.

(a)   Shielding the NP Administration from wilful and/or contingent obstruction by the Centre, the Governor, and a military which has been aggressively interfering in civilian life.
(b)   Demilitarising the North, ensuring safety and security on the streets for Tamils; ending the de facto status of these areas as if occupied by an alien force.
(c)    Ensuring that swathes of land seized by the military are returned and resettlement is smooth; dealing with the tragedy of war widows and orphans.
(d)   Building an energetic, able and efficient administration for economic activities and day to day administration. Recruiting talented people for this endeavour.
(e)    Working within the discipline of a party – notwithstanding the TNA is an alliance. Vigneswaran has no experience of party dynamics and discipline; he needs to learn fast.

Even before the new CM was sworn-in, the land powers of provincial councils were diluted by the Supreme Court when last week it squashed a judgement of the Court of Appeal and vested powers, beyond what was necessary for the case in dispute, in the President. I don’t need to remind anyone of the relationship between President and SC after the illegal ejection of the Chief Justice a few months age; hence this news will come as no surprise. The regime has no intention of returning land seized by the military for various and nefarious purposes to the rightful owners.

The regime has several motives. It wishes to please the army and permit it enjoyment of the usufruct of these lands; it must entrench military rule in the north to preserve undisrupted repression; it is sanguine about obstructing TNA-led development in the north (losing access to land resources hampers economic initiatives); and it shies away from humiliation at the hands of a TNA-PC which will make good when UPFA local bodies are disasters – dens of thieves, rapists and drug peddlers. So the regime, through the court system, struck the first blow in “wilful and contingent obstruction” of the NPC. Within a year readers can judge whether my premonitions were unwarranted.

The Sinhala-Buddhist JHU party has opened a ‘beware-of-separatism’ campaign alleging TNA victory presages division of the country. Parliamentarian Sumanthiran’s interventions in the Sinhala media and in debates, and TNA leader Sampanthan’s press releases, refuted lies and had an impact prior to the elections. They went some way to sooth sentiments, vide the equanimity with which Sinhalese at large have accepted the outcome; they now perceive how Tamils feel. There must be no pause in this intervention; the TNA must persist in exposing to the Sinhalese public the lies and perversions of the regime. If Douglas and the military can print a fake issue of the Uthayan newspaper and get saturation coverage on state TV, of what are they not capable?

A crucial arena in the battle in the South is winning the minds of the Sinhalese – forget hearts. Sumanthiran and a few Sinhalese speaking Tamils are inadequate to carry the burden into the Sinhalese heartland. The TNA needs to train campaigners and it should explore coordinated action on a common platform with Sinhala democrats and leftists. The truth is that an international and Indian backlash, and political unrest in the Tamil community the likely outcome of government tactics, will cost the Sinhalese more dearly then the Tamils. In a conflict between an autocratic Centre and an elected PC with a fresh, massive mandate, the state will come out second best. Will Rajapakse have the sense to avoid a showdown? Maybe, till the CHOGM Conference is over.

I have said in many essays and forums that the biggest next challenge is demilitarisation. Is an irresistible force meeting an immovable obstacle? Will the Gota-Mahinda siblings confine the army to barracks and stop it intervening in every aspect of civilian life? I don’t expect it; totalitarianism literally means total; one dominant power centre, not plurality and power sharing. So don’t hold your breath in expectation of a dramatic U-turn.

The issue on which Vigneswaran and the NPC cannot retreat is demilitarisation in form and substance; this is non-negotiable for the community which cannot continue to live like this. If the TNA retreats it will lose all credibility with youth and people. It will be political, perhaps physical suicide to allow the military to go on as it now does. But for Defence Secretary Gotabaya and the army, it is a red-line that must not be crossed. Internationally, the President has no choice but tactical retreat, but will he dare anger the chauvinists he has nurtured so long in his bosom?

The approach the TNA, Vigneswaran and the NPC Administration must adopt is crystal clear. This is power politics; have no faith in an ethnically hostile state. The TNA’s sources of strength are people and youth, the international community including Delhi and Tamil Nadu, and the support of the non-LTTE-rump Tamil diaspora such as the Global Tamil Forum.

The GTF backed the winning horse with consistency and principle. Now it must not falter in pushing small-mouthed doubters and extremists in the diaspora out of the way. At home and abroad the campaign for civilian over military supremacy must be pursued mobilisaing the utmost energy of the people. Everywhere in the world the military is a peril to democracy – Egypt, Syria, Burma, Lanka, Pakistan and much of Sub-Saharan Africa.

It is true Delhi failed the Tamils tragically when it refused to stop the slaughter in the Vannie in 2009. However, thereafter the Rajapakse juggernaut could not have been brought under control, nor the NPC elections held but for international and Indian arm-twisting. Vigneswaran must stop small-mouthing the international community, Tamil Nadu and India. True he is new to politics, but does he need to be such a slow learner?

The NPC Administration must be sincere in reconciliation, it must not be first to precipitate confrontation with the Centre; it must be reasonable, honourable and not allow hot-heads to cost it international support or confuse the Sinhalese. At the same time it must stand firm.

I have used this essay to argue that the government cannot be trusted; hence tactical wisdom, not recklessness is called for. The TNA can learn from the master of process-dialectics, Nelson Mandela. Can Vigneswarn, Sampanthan and Sumanthiran match Mandela’s wisdom, determination and flexibility? A tall order but not impossible!

Traditionally the Federal Party and its successors the TULF and the TNA, have shied away from direct action and put their faith in legalistic means. In 1977 the TULF won a landslide victory and so outranked the UNP that Amirthalingam became Leader of the Opposition; but it refused to entertain any form of public agitation. It assumed that its electoral and parliamentary strength would be sufficient leverage to extract an adequate degree of devolution to appease demands in the northeast. This approach completely failed; vide the 1982 Constitution and the 1983 communal riots.

Given his jurisprudence background Vigneswaran may prefer the legalistic path, be vary of the rough and tumble of street politics, and imagine personal and professional links to the Colombo legal fraternity would give him insight to negotiate constitutional reform. Should he go down this path in dealing with a recalcitrant Rajapakse he will forfeit support in Jaffna and influence in Colombo. He needs to be a team player able to transcend and unite the factions by providing strong and determined leadership, an able vice-captain alongside Sampanthan. As an outsider from Colombo fortunately he is unpolluted by past factional conflicts. More important, the huge number of votes polled will gives the TNA much authority
SAAG