Sri Lanka: ‘Ranil Wickremesinghe fatigue’ and the challenges UNP has to overcome 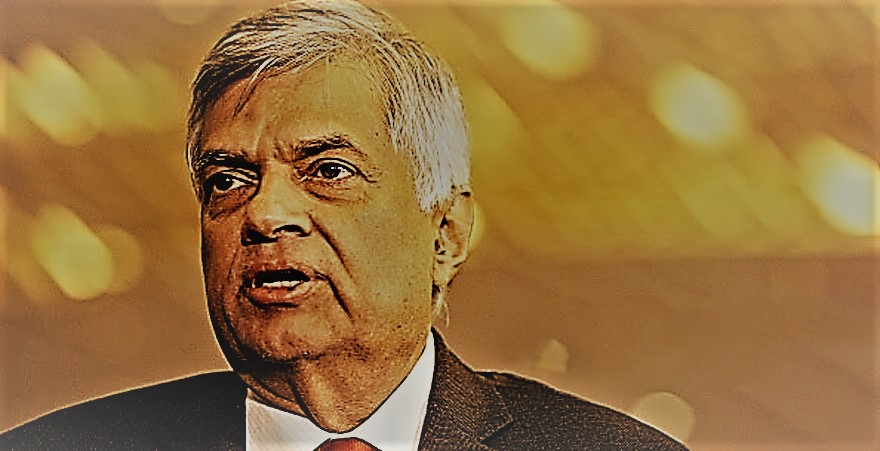 Amidst so many stories about the ever – exciting twists and turns in the crisis faced by our Government, we seem to ignore so many other significant political questions. One such question is: what is happening in Sri Lanka’s political parties? As visible from the unfolding power struggles, Sri Lanka’s two main parties – the United National Party (UNP) and the Sri Lanka Freedom Party (SLFP) – are in crisis, awaiting a re-invention for their survival. Meanwhile, a new party — Sri Lanka Podujana Peramuna (SLPP) – has emerged, posing a serious existential threat to the SLFP and even showing signs of becoming the next ruling party, pushing the SLFP into a new phase of survival challenge.

Let us begin with the uncertainties the UNP is facing in a time of transition.

The UNP has an unusual leadership problem and it is at the core of its transition dilemma. The UNP has been experiencing a condition, which may be called ‘Ranil Wickremesinghe fatigue.’ Yet, the party cannot either get rid of him or replace him so easily. Wickremesinghe fatigue has arisen due to a variety of factors. Wickremesinghe has been the party leader for too long, since 1994, presiding over many defeats and succeeding only a couple of times, yet, not quitting or allowing a successor to emerge. No potential challenger has been allowed to consolidate within the party either. Through clever tactical manoeuvering, all challenges to the leadership have been warded off.

With an enduring capacity to survive even the most unfavourable of circumstances, Ranil Wickremesinghe has once again demonstrated, as we witnessed at the recent No Confidence Motion against him, that he is indispensable to the UNP, if it is to successfully negotiate multiple external threats. None of the aspirants to party leadership seem to possess Wickremesinghe’s patience, dogged perseverance, and tactical acumen in times of seemingly irreversible crisis. 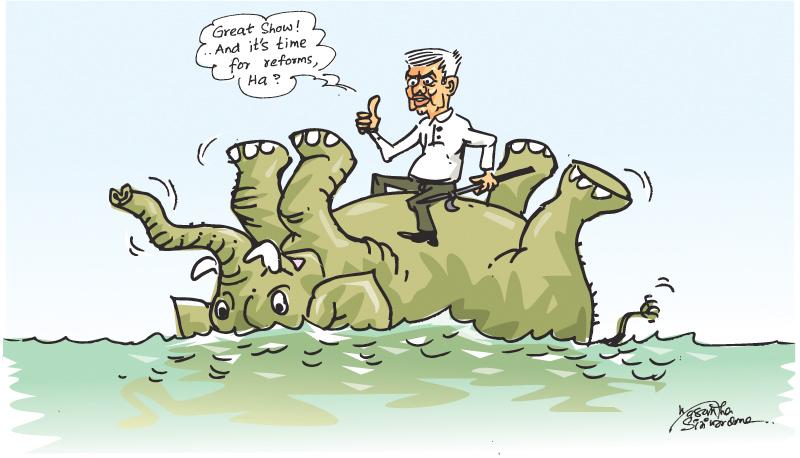 nterestingly, this further complicates the UNP’s leadership problem. If the UNP is to succeed electorally in the future, it needs more than leadership shrewdness and capacity for tactical manoeuvering in times of crisis. It needs two fundamental shifts in two domains, first, in the social background of its leadership, and secondly, in its economic and development ideology. But these two are fraught with dilemmas.

With regard to the social bases of party leadership, the UNP is the only political party in Sri Lanka at present, which continues to have its leadership coming from the narrow social class of the Colombo-centric Westernized elite. One or two of its leadership aspirants, silently waiting in the wings, are also recruited from that class or from the still narrower circle of the ruling family.

At the same time, since the 1980s, there has been a continuing but unsuccessful clamour for an end to that social class of the party leadership. The continuing decline of the UNP’s political fortunes after 2004 repeatedly renewed campaigns for leadership change. A rhetorical argument often advanced by party dissidents as well as Wickremesinghe’s detractors was that the UNP needed a new leader who could feel the pulse of the Sinhalese Buddhist majority community and admire the body smell of “our rural peasants”. Mahinda Rajapaksa obviously was the model for this vision of a ‘new age’ leader for Sri Lanka.

What appeared during the past few months is that the UNP was ripe for new leadership emerging from a non-ruling family, or with a non-elitist social background.

The appointment of Ranjith Madduma Bandara from Moneragala to replace Sagala Ratnayake as the Minister of Law and Order further fuelled speculation of possible things to come. It is extremely interesting now to see whether, in the aftermath of the defeat of the no-confidence motion, this possibility can still hold.

Things appear to have changed after the defeat of the Joint Opposition’s no confidence motion. Wickremesinghe has shown that he has more than nine political lives. The UNP will have to work out a strategy of transition in which Wickremesinghe’s services to the party can be continuously obtained while a new leadership manages to hold the party’s different factions together.

The leadership transition is also closely interwoven with the class balance of power within the decision-making circles of the party. Wickremesinghe has been running the party and its policy-making apparatus through a caucus of friends and advisors who have close links with Colombo’s business and professional elites. It is this fact that has also generated a great deal of resentment among new leadership aspirants who either hail from provincial non-elite backgrounds, or whose support base is limited to the rural peasantry in one or two districts.

The new leadership will have to mediate between these competing pressures coming from diverse class interests by rebuilding new networks of political patronage. The example set by Mahinda Rajapaksa and his brothers when the former assumed the SLFP leadership in 2005 would be a model to follow. But for that model to succeed, a new leadership will have to ensure that the UNP will win the next presidential and parliamentary elections. As UNP Deputy Leader Sajith Premadasa has already indicated many times, a new leadership aspirant would be reluctant to take up the challenge if the UNP’s electoral success in 2020 is in doubt.

On the question of economic ideology, the UNP has a team of ideologues, led by the party leader, who are convinced neo-classical liberals. They are, in a way, a bunch of honest neo-liberals, because unlike the economic managers in the Rajapaksa camp, they do not hide their neo-classical convictions for the politics of electoral advantage. However, little do they seem to have realized that in Sri Lanka, elections campaigns are not the ideal forum to seek public support for neo-liberal economic ideals.

Let us take the example of Prime Minister Wickremesinghe’s spirited campaign during the recently held local government election in which the UNP fared rather badly. Wickremesinghe’s developmentalist message was couched in the language of classical as well as neo-liberal economics. The classical economic liberal principle that Wickremesinghe passionately propagated was that voters are primarily ‘economic men’ (homo economicus) who calculate, day and night, their individual economic gains and losses and make their political decisions accordingly. The neo-liberal principle he preached to even rural peasant voters was that citizens are essentially market-driven producers-cum-consumers who are constantly worried about how much money they have left in their pockets at the end of the day.

It is not clear whether this developmentalist doctrine, if it continues, will be a recipe for future electoral losses too. Yet, a new leadership will be instinctively forced to re-think the UNP’s economic message to the voters. 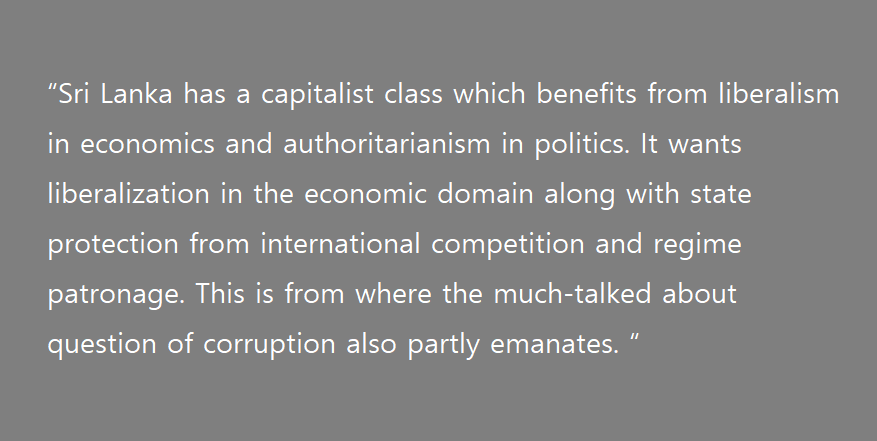 Dealing with Sri Lanka’s current business and entrepreneurial classes for political loyalty would also be a formidable challenge to the new UNP leadership.

Sri Lanka has a capitalist class which benefits from liberalism in economics and authoritarianism in politics. It wants liberalization in the economic domain along with state protection from international competition and regime patronage. This is from where the much-talked about question of corruption also partly emanates. This class wants a strong state, a strong government and a strong leader. Therefore, this class is deeply sceptical about liberalization in the political sphere, because, as they believe, it tends to produce what they see as ‘instability’ on the political and labour fronts. The SLFP under the Rajapaksas (and now the SLPP under them) is the political party that has had the capacity to attract the admiration of this class of Sri Lankan capitalists.

Now, the problem for the UNP is that it has lost the allegiance of the core sections of the Colombo-based capitalist class, because of its dogmatic adherence to neo-liberal economics, not providing state protection to individual entrepreneurs. Its economic policies have also hurt its most loyal electoral constituencies, the middle class and the peasantry. As a result, the UNP has been getting progressively alienated from its core electoral support groups so much so that the UNP can win an election only when it is leading a broad political coalition that includes ethnic minorities.

Meanwhile, political liberalism does not seem to be the strongest point in the political convictions of many new UNP Ministers and MPs. They are not unique in this. Among the vast majority of new professional politicians in Sri Lanka, with the exception of the JVP parliamentarians, there do not seem to be any firm or clear political convictions. Politics for them has nothing to do with public good or ‘national’ agendas. They are not faithful even to their own social class. Ranjan Ramanayake’s speech at the NCM debate provided us some fascinating insights into the political economy of the new breed of professional politicians. Those who watched on TV the contributions made by Ministers and MPs at the NCM the other day, would also have realized how deep rooted the poverty of political thinking is, in this class of professional politicians. The only ideologies they are easily attracted to are racism and hollow populism.

Even amid such a culture of intellectual poverty across party lines, and the rise of unprincipled populism, Ranil Wickremesinghe as party leader has demonstrated in recent years an unusual commitment to political liberalism and political openness for which he has been pilloried by his neo-totalitarian critics. Wickremesinghe, is perhaps one among the handful of politicians in the yahapalanaya coalition, who intellectually understood the meaning and the depth of the kind of democratic openness that Sri Lanka witnessed after January 2015.

The real challenge for the new leadership of the UNP would be not to allow that democratic legacy be overrun by easy-to-grasp and electorally tempting doctrines of racism and electoral populism.

As for the SLFP, led by President Sirisena, the transitional challenges are no less formidable. They warrant a separate essay.

(UNP AND SLFP TRANSITION BLUES- I Courtesy of the Observer. )