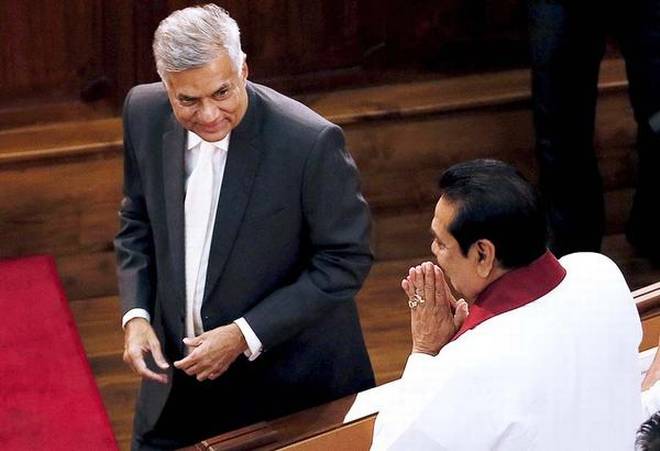 In the first instance of reaching out to the former President, ousted in the presidential and parliamentary elections of 2015, the leaders asked Mr. Rajapaksa, as “a senior and respected leader”, to back the national unity government and other political parties working with it to remake the country’s Constitution, The Hindu learns.

The meeting held at the Prime Minister’s office in Parliament last week was reportedly prompted by President Maithripala Sirisena, who is said to be keen that the former President be brought on board while the country embarks on a new Constitution. It was President Sirisena, political sources close to him said, who asked the Prime Minister and the senior Tamil leader to engage Mr. Rajapaksa on the subject.

When contacted, Mr. Sampanthan confirmed that the meeting took place. “Our efforts should continue given Mahinda Rajapaksa’s own efforts to evolve an acceptable constitutional arrangement during his term in office,” he said, referring to reports from an earlier All Party Representative Committee and an experts’ committee that recommended some measures of devolution.

Soon after it came to power, Sri Lanka’s first national unity government — with President Sirisena of the Sri Lanka Freedom Party and Prime Minister Wickremesinghe of the rival United National Party at its helm — decided to remake the country’s Constitution, with the aim of solving the long-pending Tamil question.

Different groups in Parliament recently submitted their proposals on constitutional reforms to the government. The reports are scheduled to be debated in Parliament in January 2017, after which the matter will be put for vote. Following passage with two-thirds majority, the country is likely to go for a referendum where every citizen will get to vote on the new Constitution.

Departing from his earlier promises as President to “go beyond” the 13th Amendment — an outcome of the Indo-Sri Lanka Accord of 1987 that envisaged substantive devolution of powers to the provinces — Mr. Rajapaksa has slammed draft proposals for the new Constitution, opposing suggested reforms on devolving land and police powers to the provinces. While Prime Minister Wickremesinghe, in a recent interview to The Hindu, was confident of having the numbers in Parliament to pass the reforms, Mr. Rajapaksa’s supporters — he remains considerably popular among the Sinhala majority — will be crucial to a favourable vote in the island-wide referendum.

Mr. Rajapaksa, who now sits in Opposition in Parliament, has the support of nearly 50 MPs identifying themselves as the ‘Joint Opposition’, in effect causing a rift within the SLFP part of which cohabits the government. The former President has accused his successor government of being vindictive, in targeting members of his family and other associates charged of offences ranging from corruption to murder.

While Mr. Rajapaksa is yet to voice support to the government’s reform agenda, Mr. Sampanthan said: “He should have no difficulty in becoming part of the current process.”
The Hindu