Sri Lanka: Rajapaksa’s MPs turned to violence in the face of 3rd defeat in a week! 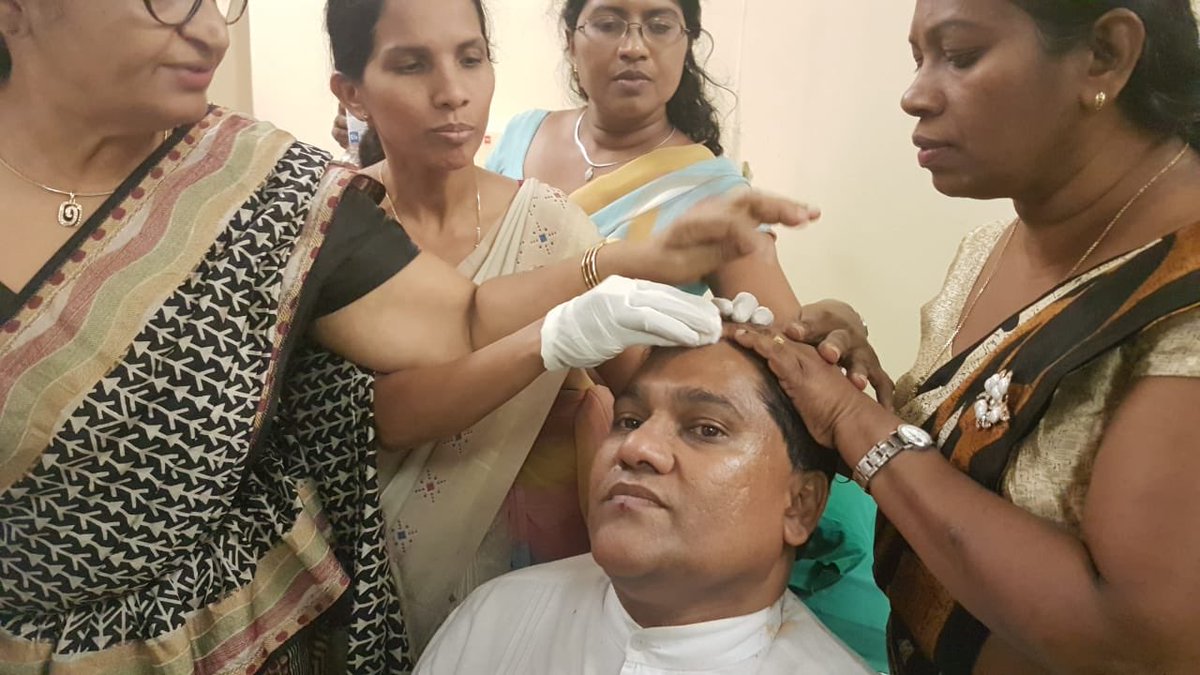 Image: JVP MP Vijitha Herath being treated after he was assaulted with a constitution book! ( Tweeter photo)

Several policemen and Parliamentarians were injured during the chaos in Parliament today. Chili powder was thrown at some policemen as well as Parliamentarians Gamini Jayawickreme Perera and Vijitha Herath. Former Minister Malik Samarawickreme also sustained injuries in the incident. (Colombo Gazette)

During the parliamentary session today Sri Lanka tweeter community kept updating the situation to the world. Sri Lanka brief publishes selected some tweets that were sent on real time.

In an unprecedented move @PresRajapaksa & prez @MaithripalaS loyalist MPs take over @SriLanka parliament by force to scuttle the proceedings. This is, in the words of speaker @KaruOnline " a coup without guns" @antonioguterres @EU_in_Sri_Lanka pic.twitter.com/FOW5zsxJQ6

#Srilanka: Many SLPP MPs tried for nearly an hour to disrupt the sitting. One of them sat on the Speaker's chair, others surrounded the area and raised slogans. Most SLFP MPs watched from their spots. They effectively delayed the session, only to lose a vote. #lka via @the_hindu

#SriLanka : @PresRajapaksa politics sink in to the level of throwing Chili powder mixed with water within the parliament to MPs who oppose them ! Cannot imagine the level of violence they will sink in during an election! ( 1- MP Jayawicrama Perera, UNP ; 2 – MP Vijitha Herath pic.twitter.com/ZQLKajyk2v

Police enters Chamber. They are trying to assault the police. Pandemonium #CoupLK pic.twitter.com/pV1aQVmNyT

Watching parliament live on tv today, seeing Karu surrounded by cops & trying to do his job, watching goons paid for by our tax money throw furniture & chilli powder at each other & the cops – for the first time I had tears in my eyes. Shame. Disgrace. No words to describe this.

.In case @MaithripalaS account deletes the tweet concerned, here it is as a screen grab- seems it's the first time in 11 days he has tweeted… pic.twitter.com/LX8kk3ofnX

@anuradisanayake & Vijitha Herath MP now spk on TV saying chili mixed with water was thrown @ MPs. Vijitha Herath says he was hit by a copy of the constitution. This when they didn’t engage in any violent acts. Thuggish rule must end now #ConstitutionalCrisisSriLanka pic.twitter.com/htES8Kuc37

The JVP has really been solid throughout #couplk. A thick volume was thrown at him by JO MPs for seconding the no confidence motion against @PresRajapaksa – saw the massive book flying across from near the Chair #lka https://t.co/LOMykDjdcG

Standing orders were suspended by majority vote. The no confidence motion against @PresRajapaksa passed on Wednesday tabled again with first clause deleted. The Speaker called for order so he could take a vote by name. Since JO MPs did not heed him, he took a voice vote #CoupLK