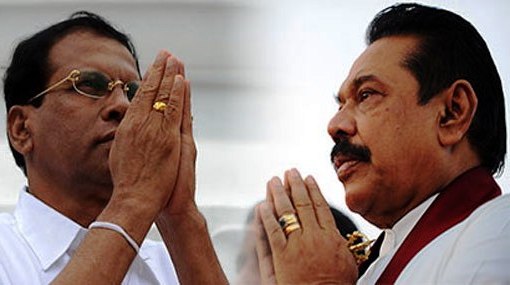 After obtaining the President Sirisena’s  green light  seven Provincial Chief Ministers loyal to him  met with former President  Rajapaksa last Sunday the 22nd. Their main objective was to forge a united alliance of the two SLFP factions, one backing Sirisena and the other Rajapaksa, to contest the Provincial Council (PC) elections as one.

Senior SLFPers backing Sirisena confess privately local government  polls would end in certain defeat. If an alliance was forged, that would have paved the way for victory, said one of them. Another reason, they point out, is a decision first on the system of voting at the local council polls. Some Chief Ministers have been complaining to President Sirisena that the majorities in their respective councils were fragile. Those close to Sirisena felt that an accord of some sort with Rajapaksa would not only unify the party but would pave the way even for a future SLFP Government. For them, this patching up operation was a necessity, particularly in the light of irreconcilable issues that have cropped up with their United National Party (UNP) partner in the National Unity Government.

The former President, who agreed to the meeting, ensured some of his strongmen who were not in the best of terms with the Chief Ministers were present. The Chief Ministers declared that they came at the request of President Sirisena to appeal to Rajapaksa not to break the SLFP. Rajapaksa first let his own invitees to speak but joined in later.

“You can meet me anytime. However, you all have joined our party’s enemy, the United National Party (UNP). As long as this arrangement continues, I cannot discuss anything,” declared Rajapaksa. He disclosed for the first time that he had been receiving offers that investigations against him and members of his family would be dropped if he chose to retire from politics. He said he was willing to discuss the demands of the Chief Ministers only if President Sirisena removes the UNP from his Government. He charged that the SLFP policies had been “sold” outright to the UNP. “How we can work with you all under these circumstances?” he asked.

Although the Chief Ministers and Rajapaksa meeting ended on a sour note, there was still a ‘silver lining.’ That was certainly comforting news for Sirisena. There was heavy pressure on Rajapaksa this week to support Sirisena and his SLFP faction. That is even if they did not wish to forge unity for the time being. Last Tuesday, three of Weerawansa’s staunch backers — Ven. Elle Gunawansa Thera, Gunadasa Amerasekera and Nalin de Silva — met Rajapaksa. They urged him to support Sirisena particularly with regard to constitutional matters and electoral reforms. However, Rajapaksa holds the view that the Executive Presidency should be abolished.

Edited excerpts from ” Corruption continues: President must reverse the trend” appeared in the Sunday Times