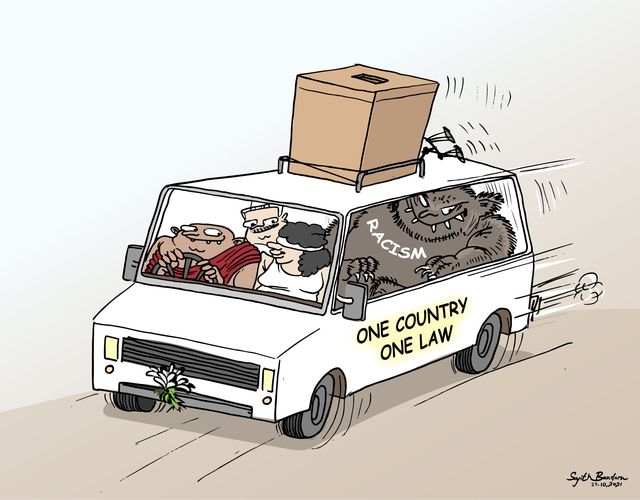 Establishing a another Presidential Task Force for One Country, One Law President Gotabaya Rajapaksa has appointed Galagodaththe Gnanasara thera as its chairman.

Sri Lanka President Maithripala Sirisena pardoned him who is accused of inciting violence against ethnic minority Muslims and convicted of contempt of court.

He was sentenced to six years in prison in August over a 2016 incident when he interrupted a court hearing about the abduction of the journalist in which military intelligence officials were accused.

Gnanasara was also sentenced in a separate case in June for having threatened the journalist’s wife.

Since 2014, the monk has faced accusations in cases regarding anti-Muslim violence, hate speech, and defaming the Koran.

in 2014 year Gnanasara signed a pact with Myanmar’s Ashin Wirathu, who once described himself as “the Burmese bin Laden”, in what the duo called a bid to counter regional conversion efforts by Islamists.

In 2000 driving a car in a drunken stupor this same Monk Gnansara  knocked down a man who had to be rushed to hospital with a smashed leg. He was convicted for drink and driving, in the Colombo Magistrates (Road Motor Vehicle) Court in case No 6315/2000, including the charge, amongst nine, of not reporting the accident.

Rajapaksa appointed PTF has 13 members and and not single Tamil person among them.

4  Muslims have agreed to work under Monk Gnanasara.

If Somarama or Bhuddharakkitha were alive today, no doubt they would’ve been heading one of GRs TF or been one of his advisers @kelums . https://t.co/ZHPXw0DZGE

The gazette says that  administration of justice, its implementation and protection under the law should be fair by all as set out in the Constitution, and no citizen should be discriminated against in the eye of law on meted out special treatment on ground of nationality, religion, caste or any other grounds.

Tamil parliamentarian Shanakiyan Rajaputhiran Rasamanickam tweeted sayingthat the appointment of a criminal to lead this committee is almost a joke in itself.

This committee itself is the definition of irony. What is the purpose of establishing a committee if the existing law cant be implemented correctly? The appointment of a criminal to lead this committee is almost a joke in itself. pic.twitter.com/q12iayrlFT

The 13-member Task Force has been vested with making a study of the implementation of the concept; One Country, One Law within Sri Lanka and prepare a draft Act and study Acts and amendments that have already been prepared by the Ministry of Justice and to determine if there are suitable amendments and submit proposals as deemed appropriate.

Senior Assistant Secretary to the President Jeevanthie Senanayake has been named as the Secretary of the Task Force.

The Task Force has also been ordered to submit reports to the President at least once a month and submit the final report on or before the 28th of February next year.

Gazette Notification- Task Force on One Country One Law

(With inputs from national and international media)