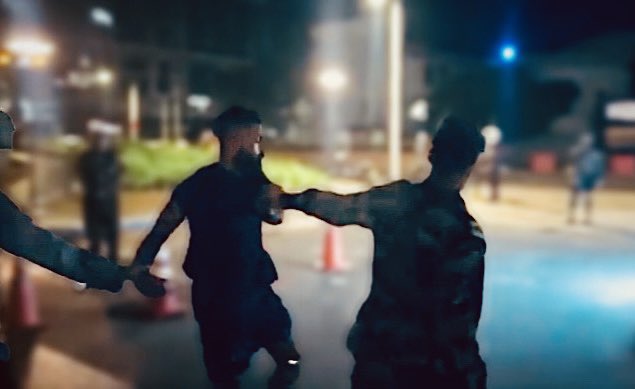 Image: A journalists being abducted by the military.

Protesters were chased away, assaulted, verbally abused at Galle Face. These include women. Some were assaulted repeatedly. More than 50 people were injured and 3 were sent to hospital.

Those injurred were not allowed to go out to seek treatment for several hours.

Structures of protesters, such as IT centre, community kitchen, water dispending centre, tents of hearing impaired persons, disabled soldiers and other tents were destroyed.

Those trying to reach protest site were blocked. Including ambulance, lawyers, journalists Buddhist and Christian clergy and human rights defenders.

A journalist saw at least 6 men being dragged away by military, nearby the US embassy. One woman was kicked. One man had complained about being tortured for about 4 hours along with others, being beating me with wooden sticks and back of guns, kicked with their boots (Sahan).

At least two lawyers were assaulted (Nuwan and Chamara). One of them had been arrested (Nuwan).

Along with lawyer Nuwan (mentioned above), at least 8 others have been formally arrested. Two of them were admitted to hospital. The other seven were held in Maradana police and were taken to a Judicial Medical Officer around 11am.

Several others were held in custody of military for periods ranging from few minutes to several hours. Some were made to kneel, beaten and subjected to cruel, inhumane and degrading treatment. Some had their phone taken an footage deleted.

Military and police had totally occupied the area North of Baladaksha Mawatha – Galle Road junction and protesters were forced to be south of this junction.