Sri Lanka: Protestors tear-gassed one month after 9 May attack 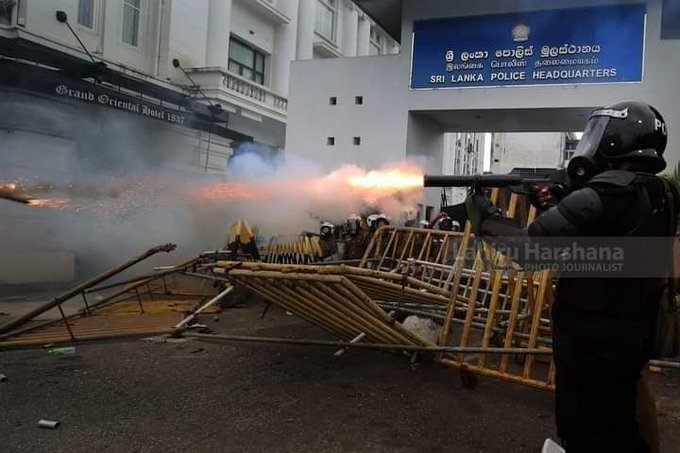 Riot Police fired tear gas and water cannons to disperse protestors marching towards the Police Headquarters in Colombo yesterday (9) when they attempted to breach the barricades and roadblocks along York Street, to demand justice on the one-month anniversary of the unprovoked attacks on the “GotaGoGama” protest zone on Galle Face on 9 May 2022.

Speaking to The Morning ahead of the protest on Wednesday, Catholic priest Rev. Amila Jeewantha Peiris, who is an active member of the “GotaGoGama”, said: “It has been one month since the attacks on ‘MynaGoGama’ in Kollupitiya and the ‘GotaGoGama’ at Galle Face by Sri Lanka Podujana Peramuna (SLPP) supporters who attended a meeting with then-Prime Minister Mahinda Rajapaksa at the Temple Trees. They destroyed the ‘MynaGoGama’ and the ‘GotaGoGama’. Thousands of innocent people were arrested and more than 600 are in prison, all charged with violence. What about the people directly involved in the matter?”

“Among the 22 people named by the AG is former SDIG in charge of the Western Province Deshabandu Tennakoon, who is now on leave. Has he been arrested? What about SLPP MPs Mahinda Rajapaksa and Johnston Fernando who were directly involved?” Peiris queried.

A normal Monday morning on 9 May turned into a scene of chaos after pro-Government supporters attacked the “MynaGoGama” protest site near the Temple Trees following a meeting chaired by the then Premier Mahinda Rajapaksa. The meeting at the Temple Trees was organised by the SLPP Local Government Members Forum and saw hundreds in attendance.

Following this meeting, the pro-Government supporters attacked the “MynaGoGama” protest site near the Temple Trees and dismantled the camp. Thereafter, they moved to the main protest site in Galle Face known as “GotaGoGama” and destroyed several tents, and assaulted peaceful protestors.