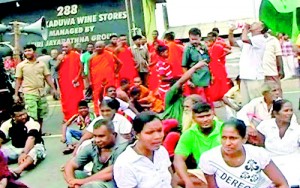 The Buddha was the first missionary; and the first to set the Wheel of the Dhamma in motion to reach the ends of the earth for the welfare of all beings. By his precept and deed he emphasised the right of every man to propound without bar the tenets of his religious beliefs provided the gospel beating did not trample upon the religious sensitivities of people who held a different creed.

During 45 years of missionary work, the Buddha sent his monks far and wide to spell out the way the Thathagathas had shown. Thousands of Hindus, nigantakayas and others became converts after hearing the Buddha’s sublime message. He even made kings renounce the state religion of Hinduism and embrace the new philosophy he expounded and persuaded thousands of Brahmins to descend from their lofty caste pedestal and realise deeds not birth make one worthy of worship and obeisance.

Conversion, not by force or guile but by understanding the noble truths Buddhism held, was the order of the day; and the Gift of the Dhamma was hailed by the Buddha as the greatest gift of all.

Historically, Buddhism has been an active proselytising religion with its missionaries converting millions of people in South Asia, China, and Japan. Even today there is active proselytisation practiced in the West mainly by monks making Buddhism a major growing religion in the West. Buddhist Viharas, societies, centres and groups have been founded across Europe and the United States and hundreds of books on Buddhism have been published for the general reader. Popular interest in Buddhism is rising and on the march mainly due to the proselytising efforts of Buddhist monks.

While such noble and positive activity is taking place in foreign climes and more and more people of the Christian faith are reaching out to Buddhism enchanted by its emphasis on compassion, kindness, universal love and equanimity, it is saddening to note that a handful of monks in Lanka are tub thumping the battle drums of violence and hate; and perpetrating terror in saffron against other faiths in direct and flagrant violation of the Buddhist doctrine of ahimsa and against the Buddha’s dictum to respect all religions; and that an insensitive government and an apathetic society calmly look askance at this violent breach of the social fabric, content to remain inert.

Last Sunday’s hate ridden repulsive attacks on the Assembly of God and the Calvary Church in Hikkaduwa by a group of Buddhist monks while the followers were at prayer must be unreservedly condemned by all. It reveals also that though the Sinhalese have been blessed at birth with the good fortune to be born with the silver spoon of Buddhism and to be cradled in its gentle, peaceful philosophy, for some the good fortune obviously goes no further than the new born babe’s cry. Born savage, no amount of a Buddhist environment can make them shed their past traits and, though shrouded in robes and cowled with a saintly ring spuriously exuding an air of Buddhist thought and mental development, savage and barbaric they remain, the very flotsam and jetsam of society’s garbage bobbing on a sea of bigotry. As the Buddha said, when asked why all who hear his sermons do not attain higher states of mind, “The Thathagathas only show the way.”

The diehard, rabid, chauvinistic section of the Sinhalese first attacked the Tamils when they had no means of protecting themselves. That was on the grounds of race, on the basis the Tamils were asking for more, asking too much. Their pseudo Dutugemunu mentalities were puffed, their inferiority ridden egos bloated, their fervent patriotism self hailed and much vaunted as they demonstrated their heroism by proving their cowardice in attacking and even killing helpless Tamils, women and children included. The awesome price the nation had to pay and still pays for their uncurbed and unmatched villainy is well recorded.

Now with the Tamils temporarily silenced, the insatiate perverse force has found new soft targets upon which to expend the froth and foam of their distemper. It has become the turn of the Muslims and now it has also become the turn of the Christians. From the arena of race the diehards, spearheaded now by monks, have progressed to trespass upon the far dangerous field of faith.

Muslim. Mosques were attacked, businesses houses were stormed, halal certificates were banned and even the traditional dress Muslim women wear in public was subjected to scrutiny. Along with the Sihala Ravaya which mysteriously spawned in their tracks they proclaimed themselves as the Buddhist moral police force empowered by their own warrant to physically attack those that did not conform to their own code of conduct; and used violence as their means to ostensibly protect the Buddha’s philosophy of non violence.
The focus shifted to the Christians last Sunday. Though there is no evidence to connect either the Bodu Bala or the Sihala Ravaya to this attack, another hatchling appears to have been born from the same vile vulture of bigotry. According to the police, eight monks said to belong to Hela Bodu Pawura have been identified in connection with the attack on the two Christian churches. The police have also stated that arrests are imminent and will be made. Well and good, but is it enough? This is not an isolated attack but one in a series committed by different groupings executed according to an unknown grand design. It is vital the Government realises the gravity of the situation and, before all hell breaks loose, adopt a consolidated approach to exorcising this phantom from society’s midst. In fact the government is duty bound to do so.
The Sri Lanka Constitution guarantees, amongst other rights, the following five rights all of which were violated in the church attacks: Article 10 the right of every person to have or adopt a religion of one’s choice. By Article 14 1a) the right to free speech and expression, b) the right to peaceful assembly, c) the right to free association and e) the right to manifest his religion or belief in worship, observance, practice and teaching either by himself or in association with others in public or in private.

If any of these rights are trammelled by the state or its officers, the citizen of Lanka has the right to appeal to the Supreme Court for redress. But what if the rights are violated not by the state or its officers but by private gangs who take the law into their own hands and deny the people the enjoyment of those rights while the law enforcing authorities turn a blind eye thus enabling the violators to give effect to their pernicious will?

These rights and freedoms are not meant to remain glorified and confined to the statute books but to be actively enjoyed by the citizen. Thus while the constitution grants these right isn’t there a concomitant duty placed on the State to ensure that the necessary peaceful conditions exist for the citizenry to freely exercise and enjoy these rights? If there isn’t, if the State can nonchalantly wash its hands off from its duty to provide the environment for constitutionally enshrined freedoms to be enjoyed, then those rights aren’t worth the paper they are written on and a citizen’s belief that he is living in a full blown democracy with guaranteed fundamental rights is only a pipe dream. For what use are rights on paper if there is anarchy on the streets due to State inaction?

Thus it behoves the Government to make plain to all that zero tolerance would be shown to any person or groupings who dare flout the criminal law of the land bent on provoking religious acrimony on the flippant basis that patriotism justifies its transgression. The saffron robe should not be allowed to be used as a uniform of authority to wreak religious discord and serve as an armour of immunity from the due process of the law. All are equal and no fancy dress must be allowed to conceal the naked criminal intent and guilt of the wearer however glorified or patriotic he may appear to be.

Furthermore, under Article 9 of the Constitution, the State is placed under a duty to protect and foster the Buddha Sasana. Protecting the Sasana means not only shielding it from external attacks but also safeguarding it from internal threats. And this entails that the Vinaya Rules governing the conduct of the community of monks is strictly followed by each Buddhist monk.

It is thus the Government’s constitutional duty to ensure discipline in the Order as a way of protecting it, to see that no deviation is made from the guidelines laid for monks that would threaten the purity of the Sasana and destroy the respect and reverence paid to it. The actions of the Bodu Bala, Hela Bala and Sihala Ravaya serve only to bring the Sasana into disrepute and ignominy and they must be dealt with regardless of any short term political fallout however detrimental to any particular political party. As the proud custodians of Buddhism in its pristine form for over two thousand years, Sri Lanka has a duty to mankind to ensure the record continues unsullied and that generations hence have the opportunity to imbibe the pure spring waters of the Buddha’s profound teachings preserved by the Noble Order of the Sangha.

No doubt the brigand of renegade monks will hold it as their defence that they attacked the two churches on Sunday to prevent conversion of Buddhists to Christianity It should be noted that presently there are many Buddhist monks in the western world spreading the word of the Buddha and, in the process, turning Christians into Buddhists even as the Buddha spent 45 years of his life expounding his message to people of other religions and successfully converting many to his own.

A man’s religion is his personal affair. Belief cannot be forced, belief cannot be denied, legally or otherwise for who can discern what the heart holds in secret. And though it might seem to beggar belief, given the present harsh economic landscape a man’s belief maybe the last thing he is left with to barter for his existence. The choice is his and, as the Lankan Constitution guarantees, his alone.