Sri Lanka: Proposed amendments do not address any of the shortcomings in the Prevention of Terrorism Act – Joint Civil Society statement 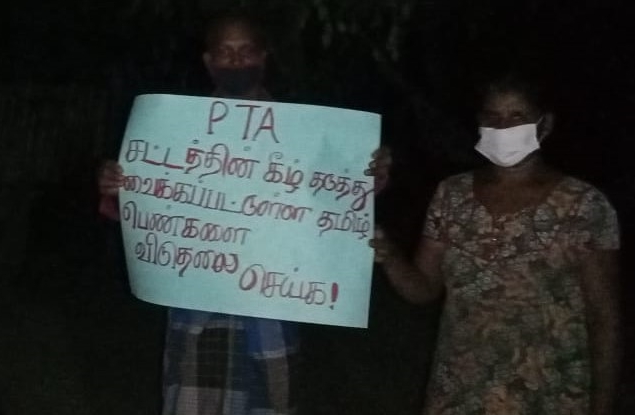 ” We restate our call for repeal of the PTA and in the interim an immediate moratorium
on the use of the law. This is in line with the requests of persons and communities
adversely affected by the law. We call upon the government to release all persons on
bail, except those that would not qualify under the Bail Act, and halt prosecutions where
the confession is the primary or only evidence.

The proposed amendments do not adhere to human rights standards enshrined in
international conventions, such as the International Covenant on Civil and Political
Rights (ICCPR), which the government of Sri Lanka has ratified and hence has an
obligation to respect and protect.” says a joint civil society statement on gazetted the Prevention of Terrorism (Temporary Provisions) (Amendment) Bill.

On 27 January 2022 the government of Sri Lanka gazetted the Prevention of Terrorism
(Temporary Provisions) (Amendment) Bill. We the undersigned express our deep
disappointment that the proposed amendments do not address any of the shortcomings
in the Prevention of Terrorism Act (PTA) that enable grave human rights violations. We
highlight that the PTA has been historically used against the Tamils, later Muslims after
the Easter Sunday attacks and now dissenters as well.

We restate our call for repeal of the PTA and in the interim an immediate moratorium
on the use of the law. This is in line with the requests of persons and communities
adversely affected by the law. We call upon the government to release all persons on
bail, except those that would not qualify under the Bail Act, and halt prosecutions where
the confession is the primary or only evidence.

The proposed amendments do not adhere to human rights standards enshrined in
international conventions, such as the International Covenant on Civil and Political
Rights (ICCPR), which the government of Sri Lanka has ratified and hence has an
obligation to respect and protect. Nor do they adhere to many provisions in the
Constitution of Sri Lanka. We set out the main shortcomings of the amendments below:

1. The proposed amendments do not contain a definition of terrorism. In this
regard, we urge the government to take note of the letter dated 9 December
2021 sent by seven UN Special Procedure mandate holders to the government
that clearly set out the elements the definition of terrorism must include. In the
current law the decision as to whether the PTA would apply in a certain instance
is a subjective decision that can be shaped by personal prejudice and bias, rather
than objective standards. We highlight arrests in the past for spurious reasons
such as possessing books in Arabic and decorative swords, and for
memorializing those who were killed during the war.

3. We note with dismay that Section 16, which allows the admissibility of
confessions made to an Assistant Superintendent of Police (ASP) or above as
evidence, and which for decades has enabled torture to extract confessions, has
been retained. We point to Supreme Court decisions and the Human Rights
Commission’s (HRCSL) reports, which illustrate that, this provision has resulted
in gross violations of human rights. Even if the confession is ruled inadmissible
during trial, the existence of the provision creates room for persons to be subject
to torture.

This violates basic due process and fair trial rights of a person accused of an
offence, because the onus is placed on the accused to prove the confession was
obtained under duress. It also calls into question the competence of the criminal justice system that has to rely on confessions to prosecute persons. Such a
provision, which is a deviation from the norm, has no place in law.

4. Section 7(3), which allows a person to be taken out of judicial custody to any
other place for investigation, and Section 15A which empowers the Secretary,
Ministry of Defence, to determine a person’s place of detention even after the
person is remanded also remain. We restate our concern that this removes a
person from the protection of judicial custody. The order of the Secretary
thereby takes precedence over a judicial order. As the Human Rights
Commission’s national study of prisons documented, persons remanded under
the PTA were subjected to severe torture when taken out of judicial custody or
held in other places upon the instructions of the Secretary, Ministry of Defence.

5. Section 11, which empowers the Minister of Defence to issue restriction orders
that impinge upon a wide range of civil liberties, has been retained. The
proposed amendment to this section requiring the person to be produced before
a Judicial Medical Officer and a Magistrate prior to the issuance of the order does
not prevent or address the infringement of civil liberties.

6. The proposed amendment on the granting of bail is cosmetic and does nothing to
address prolonged periods of time in pretrial detention. The proposed new
provision states bail can be given only if the trial against a person has not
commenced 12 months after the arrest of the person who has been detained or
remanded, or if the trial has not begun 12 months after the indictment has been
filed the High Court. If the trial has begun the person can be remanded in judicial
custody until the conclusion of the trial. Therefore, in practice, this does not
bring substantive change in the situation of a detained person.

7. The provision in the proposed amendment that requires magistrates to visit
places of detention at least once a month is inadequate to prevent torture.
According to the section, if the magistrate thinks the person may have been
subject to torture the magistrate “may” refer the person to a Judicial Medical
officer. Referral to the JMO is therefore discretionary and not mandatory. It also
gives the magistrate the discretion to decide whether or not to refer the incident
of torture to the IGP for investigation.

8. The proposed amendments include the right to challenge administrative
detention in the Supreme Court and by way of Writ. We point out that the right
to challenge arbitrary detention, including under the PTA, is enshrined in the
Constitution of Sri Lanka and is not a new right the proposed amendment
bestows on detained persons. In practice, given the paucity of legal aid, most
persons detained under the PTA face challenges accessing competent legal
representation due to lack of financial means to pursue these remedies. Even in
instances when they do pursue them, long delays in the judicial process prevent
them from obtaining redress for months and even years.

10. During the last couple of years in particular, the PTA has been used to intimidate
and harass civil society, human rights defenders and journalists, especially those
in the North and East, through visits to their offices by the TID to gather
information about their activities, summoning them to TID offices for inquiry
about their finances and even arrest and detain them. They are yet to provide
evidence of any illegal financial activity by civil society organisations linked to
the perpetration of terror offences.

The proposed amendments fail to address the fundamental shortcomings of the PTA.
Instead, they propose changes that already exist but are often observed in the breach, or
cosmetic changes that do not substantively or meaningfully change the status quo. The
actions of the government, such as the issuance of the regulations on the
Deradicalisation From Holding Violent Extremist Religious Ideology, call into question
the government’s reform claims.

We note with deep concern that despite our repeated calls for transparency in the
drafting process and consultation with key stakeholders, our appeal was ignored.
We reiterate that national security cannot be achieved by creating insecurity for already
discriminated against and marginalized communities, and once again call for the repeal
of the PTA. The repeal of the PTA must also be considered in light of the anti-terrorism
and public security legal framework that Sri Lanka has in place, and the historical abuse
of power by state entities.

The way forward must give due recognition to the protection of physical liberty.
Deprivation of physical liberty by the executive must be used only as last resort and
strictly require sufficient basis that is determined on objective factors, judicial
supervision of such basis, legal aid and prompt trials or release. Furthermore, any
process which seeks to tackle issues related to the PTA must ensure those adversely
affected by the law will receive justice, and include an enforceable right to
compensation for arbitrary detention. The prohibition of arbitrary deprivation of liberty
has acquired customary international law status and constitutes a jus cogens norm
which Sri Lanka is duty bound to secure for its citizens.

The balance the government wishes to achieve between personal liberties and national
security can only be achieved through addressing the root causes of conflict and
violence. Attempts to further curtail civil liberties in the guise of national security will
only exacerbate the insecurity of all communities and undermine the rule of law and
democracy in Sri Lanka.