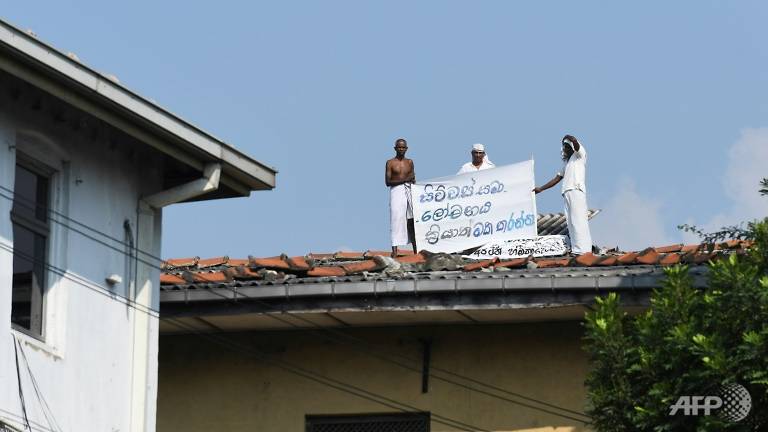 Image: Inmates on the roof of Welikada prison in Sri Lanka display a banner calling for a pardon similar to that granted the murderer of a Swedish teen at the weekend AFP/Lakruwan WANNIARACHCHI.

COLOMBO: Hundreds of inmates at Sri Lanka’s biggest high-security prison staged a second day of protests on Tuesday (Nov 12), demanding their freedom after the president pardoned a well-connected man convicted of brutally murdering a Swedish teenager.

Police said around 1,000 prisoners had refused on Monday to return to their cells at Welikada prison in Colombo, while four inmates had clambered onto the prison’s roof.

An official said police commandos were standing by outside with orders to move in if necessary.

There were reports of a similar protest at another prison in the south of the island.

The prisoners are demanding their release on the same terms as Jayamaha, who hails from a wealthy Colombo family with political connections.

The victim Jonsson, 19, whose mother was Sri Lankan and father Swedish, was holidaying in Sri Lanka when she was beaten to death in a Colombo high-rise apartment after she and Jayamaha had an argument.

The trial heard her skull had been fractured into 64 pieces.

Sirisena announced the pardon last weekend ahead of Saturday’s presidential election, when he is leaving office.

The announcement of the amnesty provoked an angry backlash on social media as well as from mainstream political parties.

“I condemn the action of granting this amnesty,” Premadasa told reporters in Colombo on Tuesday. “We will examine all legal aspects.”

He added: “The release of a murderer does not conform to my set of ethics.”

Jayamaha was initially sentenced to 12 years in prison. He appealed to a higher court, which rejected his plea and instead sentenced him to death, which was reaffirmed by the Supreme Court in 2014.

Jonsson’s sister Caroline wrote in a Facebook post about her concerns over Jayamaha’s pardon before the amnesty announcement.

“He showed and continues to show absolutely no remorse for what he has done,” she wrote.