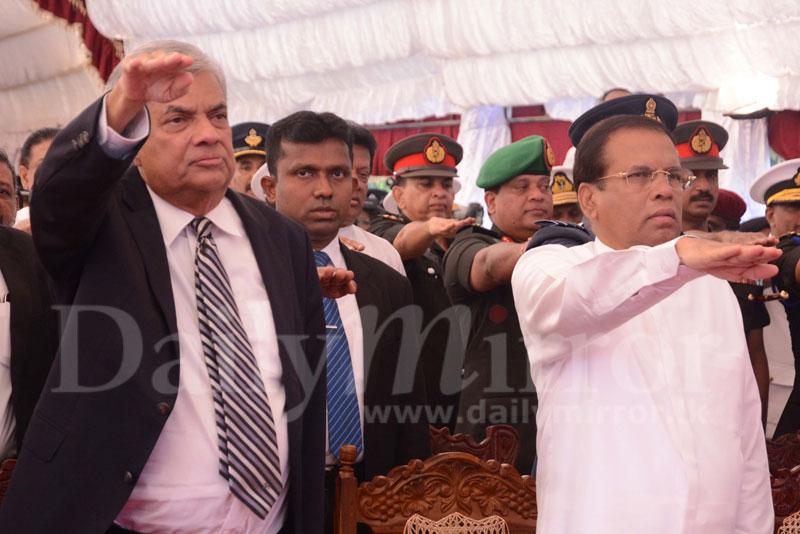 Is President Maithripala Sirisena’s anti-narcotic campaign an opportunistic farce to lure voters to his bid for a second term in the office- or a genuine mission guided by a political will unseen in his predecessors?

Public opinion seems to be mixed, not unsurprisingly in the partisan politics in the country and also due to the general Sri Lankan knack to criticize and complain about everything and anything.

However, certain idiosyncrasies in the presidential campaign have contributed to the public perception.

Last week, in a national ceremony, the president, prime minister, cabinet ministers and key government officials undertook a symbolic pledge to rid the country of narcotics. All participants had their right arm inclined upward, styled in the Nazi salute as they vowed their commitment to the national initiative. If the symbolism was the intent, it generated more bad vibe than smoking a ‘joint’ in public would have done. Though the cultural appropriation could be alleged, the gesture is now intimately associated with the Third Reich and Neo Nazis; cultural insensitivity of the gesture did not reflect well with many quarters.

Then, on the same day, false- front cover advertisements on the anti-drug campaign, published in national newspapers and sponsored by the P resident’s office ended in an embarrassment. English ones effectively killed the Queen while Sinhalese ones, of which direct translation were the English adverts, won the cup for mediocrity.

There are also concerns that arrests and confiscation of heroin, cocaine and other hard drugs are being exaggerated. The President himself has spoken in public rallies about the seizure by the Navy and STF of 500 kgs of heroin along with several Iranians in a trawler off the coast of Sri Lanka. However, according to the police, only 100 kg was seized and the rest is believed to have been thrown to the sea by the suspects before they were arrested. Different numbers by different stakeholders add to confusion.

Also, there is an unholy obsession over re-implementing the death sentence. That ignores the potential drawbacks of the strategy, which would cost the international support to the domestic anti-drug campaign. Rhetorical considerations have prevailed over sanity and threaten to compromise the legitimacy of the domestic campaign.

However, notwithstanding its current imperfections, the president’s anti-drug campaign is timely and praiseworthy. There is a marked increase in the seizure of hard drugs and arrest of top rung drug kingpins since the president brought the STF under his purview and assigned police commandos to crack down on underworld drug trafficking.

For instance, the total amount of heroin seized during 2017 was 314 kg, whereas during the last year, 737 kg of heroin was seized. More than two thirds of that ( 553 kg) was made during the last two months – after President Sirisena brought STF under his authority and undertook a personalized campaign against drugs.

During the first two months of this year, another 520 kg of heroin was seized by the police which carried out some of the most high profile drug busts.

On February 24, Police seized 294 kg of heroin in Kollupitiya, in the country’s largest drug bust. The previous largest was seized only two months before, in December when the police and STF raided a house in Dehiwala and took custody of 278 kg of heroin, 5 kg of cocaine and two Bangladeshis. Similarly, the initiatives to arrest underworld drug kingpins domiciled abroad such as Makandure Madush were put into action during the same period.

The president’s contribution is in marked contrast to the lukewarm approach to underworld and drugs, undertaken by the UNP ministers. While their inaction does not necessarily suggest their complicity, it implies the absence of pro-active action, without which they are not worth to be in the government. The presidential campaign is, however, marred by certain deficiencies that may compromise its legitimacy. They need to be fixed urgently. First, obsession with the death sentence is counter- productive for multiple practical reasons. It would make the repatriation of drug traffickers back to Sri Lanka difficult. Countries that do not condone death sentence will hesitate to send drug traffickers to a country, where they could be sentenced to death. Some other states and international agencies may be less inclined to share intelligence with Sri Lanka, effectively affecting our surveillance and interception capabilities.

Also, international co-operation in training, and equipping local officials and agencies could well be hampered, especially at a time, Sri Lanka is looking forward to modernize its capabilities in counter-narcotic operations.

Second, notwithstanding the moralistic banter against the death sentence, the state’s right to execute its offenders after a due judicial process need not to be forsaken- however, each such execution has to be justified in a utilitarian rationalization. I.e. as an action taken for the interest of the largest possible number of people, even at the expense of a few.
How many is too many is the question: hanging ten, if it serves the objectives, may be OK. But, hanging 1000 would unleash a Jacobean frenzy and defeat the objective itself.
If death sentence is to be a sufficient deterrent, Sri Lanka has to keep hanging drug traffickers in droves in order to maintain its high retributive cost. On the other hand, risk and reward of drug trade is high. Whenever the previous status quo is momentarily suspended, drug dealers would resume dealing in search of higher rewards.

The question is how many drug traffickers, the country would have to hang in order to maintain that status quo. Too many executions would be a bad advertisement for the living, the country, economy and tourism industry. On the other hand, too few would encourage drug traffickers to take a calculated risk.

A better alternative would be to introduce strict custodial sentences in maximum security prisons, which could be administered by military police until the prison department is cleaned up. Alternatively, special criminal courts in line with Pakistan’s anti- terrorist courts and new legislations could be introduced to expedite the prosecution of drug trafficking related crimes.

Third, the on-going anti-drug campaign is bereft of a clear sighted effort for rehabilitation of drug addicts. There are around 50,000 heroin addicts in the country, majority of whom are repeated offenders.

In Sri Lanka, like elsewhere in the world, 80 per cent of rehabilitated heroin addicts relapse. Treatment methods in most rehabilitation centres here are antiquate. Majority of them do not provide skill and vocational training and psycho-social support after the release. The majority of rehabilitated drug users who return to their former environment soon relapse to heroin use.

In 2017, there were 29,288 arrests of heroin users in the country, which accounted for 36 per cent of total drug related arrests. The majority of the drug related arrests were linked to Cannabis( 51,788 or 63.8%), according to the statistics of National Dangerous Drug Control Board.

The idiosyncrasy of Sri Lanka’s drug laws is that it lumps together soft and largely innocuous drugs such as Cannabis with hard, and extremely addictive drugs such as Heroin and Meth. That lack of vision distorts a pragmatic approach.

For instance, though over 29,000 heroin related arrests were made in 2017, only 2500 drug addicts were rehabilitated during the corresponding year. Others spent time in prison with hard core criminals or released after paying a fine, and returned to drug use.

Without a long term rehabilitation program of drug addicts, the anti-drug program would lead nowhere.

The government should take the lead in rehabilitating drug addicts, and set up rehabilitation centres that employ scientific methods to combat addiction and relapse, and also provide skill training for the drug users to enable their integration back to society. In order to establish a sufficient deterrent against relapse, the release should also be subjected a period of probation , and compulsory visits to a case officer and random drug tests.

Fourth, hard drugs, especially heroin is now a community problem. Therefore, community level advocacy campaigns should be launched, highlighting the danger; educating the school children, and identifying problem kids and youth, who need help before they reach a higher level of addiction.

Finally, it is anybody’s guess that the anti-drug program is intrinsically associated with the president’s bid for a second term. However, overly politicizing the national effort to eradicate drugs, even though it is undertaken at the behest of the president, would erode its legitimacy. The president should not succumb to temptation to politicise it.

Instead, he should strive to build an institutional apparatus and a framework that would outlive his tenure. He should do that urgently, because no one is sure whether his possible successors would have a similar conviction to fight the underworld and drug trade, or would opt to profit from it.