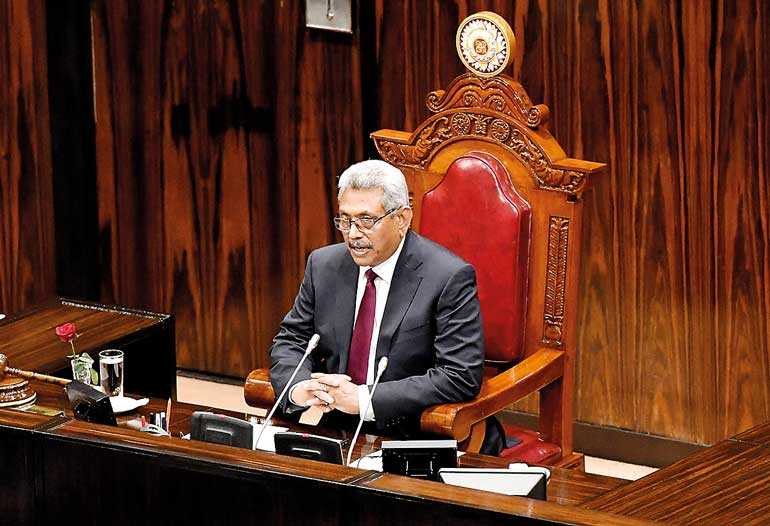 Once the 19th Amendment is abolished or seriously revised, and GR acquires dictatorial powers under a new constitution, will he push through draconian measures to satisfy his supremacist constituency?

Sans any pomp and pageant and dressed in western suit, President Gotabaya Rajapaksa (GR) flawlessly delivered his 20-minute address to the new parliament. Although it was basically a rehash of his earlier address, delivered on 5 December 2019, captioned ‘Vistas of Prosperity and Splendour’, there were certain policy pointers in the second, which, if read between the lines, should worry the minorities in particular.

It was an address solely aimed at satisfying the aspirations of the majority Buddhist community on whose overwhelming support his government achieved its victory with almost two-third majority, and on whose satisfaction, GR sees the repository of peoples’ sovereignty. There was not one word in the entire address where he referred to the aspirations of the minorities.

SLPP’s resounding victory was more the result of the same Sinhala-Buddhist-ethno-nationalist Gota-wave that ensured GR’s victory at the last presidential election than an endorsement of what the President claimed to be “the way we have governed the country during the past nine months”. It was a period of militarised administration marked by irresponsible fiscal populism, which led to simmering social and economic discontent. The financial cost of the nine months administration and the resulting economic plight were never revealed in full to the public. In fact, the political pressure brought upon the Election Commission to hold the election at the earliest possible opportunity was primarily to avoid any possible calamity at the polls when economic reality threatened to start biting. Even now water shortage and chronic power cuts are jeopardising any quick economic recovery.

Among the controversial issues raised in that address were the principle of one country one law, advice of only the Buddhist clergy on governance, protection of places of archaeological importance to preserve Buddhist heritage, changes to the system of proportional representation, and legal rights for lands occupied by people for many years. These are issues which certainly would raise great concern especially among the Tamil and Muslim communities.

One country one law

The issue of one country one law was first raised in the Yahapalana parliament in the context of the controversy over the Muslim Marriage and Divorce Act (MMDA) of 1951. The Justice Marsoof Committee Report (JMCR), which recommended a series of progressive measures primarily to remove the misogynic elements in MMDA and to make it more gender balanced with some modernist touch, was sabotaged by a coalition of orthodox ulama led by the infamous All Ceylon Jamiyyathul Ulama (ACJU) and Muslim politicians.

It was then that parliamentarian Ven. Athureliya Rathana Thera representing JHU raised the principle of one country one law and demanded the total abolition of MMDA. Does President Rajapaksa support this Thera’s contention? The new Minister of Justice has already stated that Muslims should stop the tradition of early marriages, as recommended by JMCR. Will he also support and implement the rest of that report’s recommendations, or yield to the demands of Buddhist ultra-nationalists to abolish Muslim personal laws altogether? Muslims will be watching future developments on this matter with great concern. Added to that is the issue of cremating Muslim bodies. The President sanctioned it under the exceptional circumstance of the pandemic, despite widespread protests from Muslim and other groups. Under the principle of one country one law, will that exception be legislated as the norm for Muslims by the new government?

Moreover, what would be the position of the Buddhist clergy who are supposed to advise the president on matters of governance, is also something to be watched with great interest. On the advice of clergy, it is true that members of Buddhist clergy played a historic role in the ancient past to maintain virtuosity in governance. Sri Lanka today is a multireligious and multicultural polity. Why not the President select a team of clerics from all major religions to advise him on matters of governance when needed? Instead, the president’s address simply endorses the contention of Buddhist supremacists that this country belongs only to the Sinhala Buddhists and that only they would determine what is virtuous and what is not.

A related issue is about protecting places of archaeological importance to preserve Buddhist heritage. On the face of it no one can question the legitimacy of or rationale for such undertaking. Any ancient heritage, whether it be Buddhist, Hindu, Christian or Islamic, is national heritage and beyond that it is also the heritage of entire humanity. However, when archaeological explorations come into clash with communities of people whose physical existence and livelihood in that surrounding are threatened alternative arrangements for those communities should be found.

Already, the appointment of a task force just before the election, ran into trouble with a community of Muslim cultivators in Pottuvil. According to one observer the members of that task force except for one had little expertise on archaeology. Because of the trouble and to control the damage before an election, further explorations in that area were halted.

Will the President’s address now provide fresh impetus for rekindling that trouble? It will be a test case for future archaeological explorations in the North and East in particular.

Similarly, the idea of issuing legal documents to lands occupied and tilled by people for many years should be welcomed in the interest of providing not only economic security for those tillers and their families, but also of increasing the productivity of such lands. Once again, there are specific issues especially regarding lands occupied by security forces and their families during and after the civil war. In several such instances, especially in Tamil and Muslim areas, those lands had previous owners. Will the government take measures to return those lands to those owners or legitimise the post-war status quo? This is one issue that makes reconciliation with the Tamil community particularly difficult.

Finally, the intended electoral reforms. The most important reform the country deserves at this point of time is a reduction in the volume of representatives and improvement in their quality. The standard of debate and behaviour of great many representatives in recent parliaments was a national disgrace. Quite many of them were a burden on the taxpayer and a source of corruption. That said, the intended reforms should not be a mechanism to reduce representation of minority communities.

In fact, that was one of the motives behind JR for introducing the system of proportional representation. He was particularly unhappy of the disproportionate influence a minority like Muslims used to hold in the parliament. However, even under his system Muslims continued to maintain that influence by creating their own ethnic party. Although they are weak in total number, they have turned that weakness into strength by capitalising on the weakness of the electoral system.

Even in the last election, despite major divisions and factions among themselves Muslims were able to capture more than twenty seats in the legislature. Had the election results produced a hung parliament that Muslim block would have gained a strong bargaining power.

Likewise, a united Tamil front with dozens of representatives in the parliament would be a problem to implement the agenda of Buddhist supremacists. Does the President therefore, through his electoral reforms aiming to reduce the strength of minorities in the legislature? Once the 19th Amendment is abolished or seriously revised, and GR acquires dictatorial powers under a new constitution, will he push through draconian measures to satisfy his supremacist constituency? In such situations what would be the reaction of those minority representatives who are now sitting on the government side? These are perturbing questions arising from the President’s address if read between the lines.