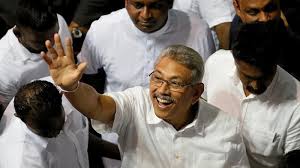 (REUTERS) In a split decision, a panel of five Supreme Court judges rejected a petition by Rajapaksa, who had asked that a lower court case in which he is accused of embezzling state funds be thrown out, his spokesman said.

If Rajapaksa, 70, is found guilty in a trial, scheduled to run for three weeks from Oct. 15, he can still appeal to the Supreme Court. But he could face a challenge to his candidacy if he were sentenced to more than six month’s in jail, legal experts said.

Rajapaksa, who denies the charges, is widely seen as the frontrunner in the presidential election that must be held before Dec 9.

The case concerns alleged misappropriation of 33.9 million rupees ($187,916) of state funds to build a memorial museum for his parents in his hometown of Medamulana, 186 km (115 miles) south of the capital Colombo.

“It’s a divided decision which shows that the Supreme Court judges are not unanimous on this,” Keheliya Rambukwella, Rajapaksa’s spokesman told Reuters on Wednesday. “He can appeal to the Supreme Court in the event the high court finds him guilty.”

A senior lawyer familiar with the situation, who asked not to be named, said Rajapaksa could face difficulties in running if he were found guilty and any appeal had not been heard before the deadline for election nominations.

“If he is convicted of charges, then he cannot file nomination for the presidential poll,” the lawyer said.

Rajapaksa, who previously held dual Sri Lankan and U.S. citizenship, also faces legal challenges in the United States, where several people have sued him for his alleged role in torture and murder during the civil war.

He denies those allegations, and said last month he had renounced his U.S. citizenship.