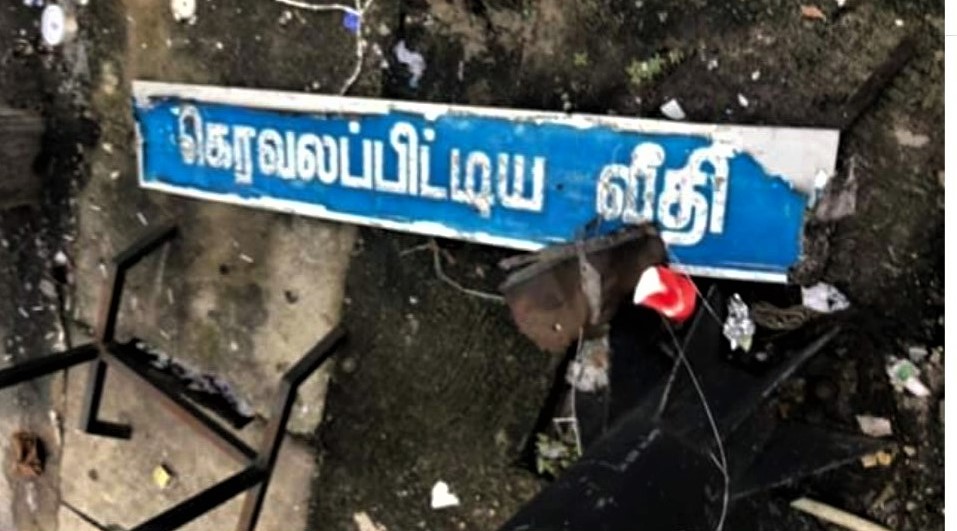 The president elect Gotabaya Rajapaksa (GR) of SLPP and Sajith Premadasa (SP) of NDF respectively received 52.25% & 41.99 of the total votes polled in the presidential election held on 16 November 2019.  This numbers could be misleading.

The result shows unprecedented level of polarisation on the ethnic and religious lines in the country.  GR received 65% plus votes in 4 Southern districts with 95% Sinhalese population. They are Hambantota (S-97%), Matara S-94%) Galle (S- 94%) and Monaragala (S-95%).

This clearly shows while Sinhalese Buddhist voted GR en masse, Tamils and Muslims rejected him in much larger percentage.

At the oath taking ceremony, Gotabaya Rajapaksa attributed his success to the “extraordinary blessings of the Buddhist monks”. “The main message of the election is that it was the Sinhala majority vote that allowed me to win the presidency,” he further said.

Pro – Rajapaksa social media launched abusive attacks against Tamil and Muslims in the country. A vehicle convoy carrying ACMC leader came under attack on 24 November. In few places around Colombo Tamil street name boards were vandalised but the Govt. quickly restored them.

Issuing a statement Tamil National Alliance leader R.Sampanthan said that by their vote “Tamil people have sent a clear message to the leaders of our country and to the international community, that the Tamil people are firm in achieving their rights, within a united undivided indivisible country.”

Presidential Election 2019 has been generally peaceful according to local and international observers. One of the two major local election observer groups, CMEV said  that “the lower numbers of election related violations reflect a greater capacity by the Election Commission to conduct elections in a generally free and fair manner.”

In its Preliminary statement on 16 November presidential election the European Union election observation mission (EU EOM) said that although the “presidential election was largely free of violence and technically well-managed, but unregulated campaign spending, abuse of state resources and media bias affected the level playing field.”

Acknowledging that the campaign environment was largely peaceful and the fundamental freedoms were broadly respected the Preliminary Statement of the Commonwealth Observer Group noted the need for mechanisms to regulate campaign finance in order to ensure transparency, accountability and an even playing field.

In the press conference to announce the final election result, the Chair of the Election Commission expressed his strong disappointment of the bias media behaviour of both private and state media during the election period. “If this situation is going to continue we do not need to have elections but can ask media owners to select and elect MPs” he said sarcastically.

“We recommend that ahead of the next election, both private and public media are independently regulated through a legal framework. We will elaborate on this issue in our final report,”  noted the  Preliminary Statement of the Commonwealth Observer Group.

Religious leaders, especially Buddhist monks campaigning for GR during religious preaching too has been cited as a matter of concern by election observers.

President Gotabaya Rajapaksa appointed his elder brother Mahinda Rajapaksa as the Prime Minister on 22 November after former MP Ranil Wickremasinghe resigned. MR has taken 8-9 ministries in a 15 member interim cabinet. Constitutionally parliament can only be dissolved on 1 March 2020. GR has stated that he will dissolve the parliament in the earliest date possible. Parliamentary election are expected to be held either at the end of April or early May 2020.

On 19 November National organiser of the SLPP Basil Rajapaksa has stated that they will change the constitution and 19th amendment to the constitution should be abolished. 19th  amendment introduced independent commissions and curbed the powers of the executive presidency. To amend the constitution 2/3 majority of the members of parliamentary is necessary.

On 19 November President Rajapaksa appointed retired Major General Kamal Gooneratne as the secretary to defence ministry.  General Gooneratne wants those who supported a new constitution for Sri Lanka dead, because he proposes they are in fact traitors. He normalises death to traitors as something natural, and inevitable. His desire to punish traitors extends post-mortem. He doesn’t want Buddhist priests to bless them or to even visit their homes. (See video in Sinhala here from seconds 2.17)

On 21 November Criminal Investigation Department (CID) Director SSP Shani Abeysekara, who  led CID investigations into the disappearance of cartoonist Prageeth Ekneligoda, the assault on journalist Upali Tennekoon, the murder of journalist Lasantha Wickrematunge and the disappearance of 11 youth was transferred.  He was replaced by  SSP W. Thilakaratna who was in charge of MR’s security. Some new outlets have reported that govt is planning to arrest SSP Sharni Abeysekara on false charges.

On 24th November facing threats, Inspector of Police (IP) Nishantha Silva, a top investigator in the Criminal Investigations Department (CID) fled to Switzerland with his family.

Accusing CID officers Shani Abeysekera & Nishantha Silva who investigated crimes committed under his orders President Gotabaya Rajapaksa said that “the man who did the inquiries against us Nishantha Silva has fled to Geneva today. (24)”

On 21 November a tweep named @garikaalan, who was providing real time developments related to human rights of the Tamil people in North and East of Sri Lanka, left the platform leaving this message. “Decided to leave this platform for a while due to security concerns coupled with systematic racist-hatred-threatening campaign levelled against me soon after alleged war criminal @GotabayaR  took office; deeply grateful for those who supported me in past.”

On 22 November Sanjana Hattotuwa (@sanjanah), founder editor of “groundviews” tweeted that “Written to Sunday Island for around 4+yrs & not a single column rejected. This Sunday’s column, on GR’s first week in office, denied publication by Editor based on “orders from above”. Will appear on blog as usual, but sad fear+self-censorship already set in.”

Read as a PDF:SLB UPDATE No 02 Presidential Election 2019