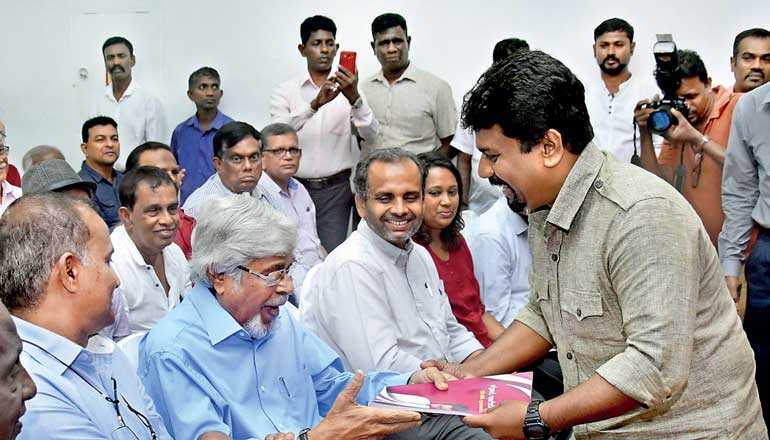 The manifesto is aimed at strengthening democracy and the rule of law, ensuring a corruption free administration and a State in which public security and national peace are ensured. It also lays down proposals to create an intelligent, healthy and environmentally sound nation and also has proposals to bring about national unity and improve the agriculture and other sectors.

Dissanayake who launched the manifesto said that that one of his priorities is to clean up the corrupt political field by introducing new laws and ensuring that the law is applied equally to all.

He said that there would be no duty-free vehicle permits or pension benefits for parliamentarians and the Cabinet would be strictly limited to 25. “The NPP’s manifesto does not contain promise that would be limited to paper but would be implemented fully,” he said.

Dissanayake said that the country’s debt burden is more than Rs. 11 trillion and wowed to minimise on borrowings and strengthening the local economy.

Here are some of the highlight of the NPP’s manifesto:

Abolish the executive presidency and revert to a parliamentary form of Government with a Cabinet answerable to Parliament
President to be appointed by Parliament and to be Head of State and Commander-in-Chief
Executive power to be vested with the Prime Minister subject to oversight of Parliament and the Cabinet
Cabinet to be confined to 25 ministers and 25 deputies while all other forms of ministerial posts to be abolished
Introduction of a new electoral system which will be a mix of proportional representation and Westminster system
25% quote for women and youth in all elections
A program for reconciliation aimed at doing away with communal mistrust
Measures to ensure that law is applied equally to all
The Police Department, Attorney General’s Department and the judicial system will be subject to reforms with the aim of ensuring the rights of the public
Financial assistance to be given for those wanting to file fundamental rights applications in court
A non-aligned foreign policy will be followed
An age limit of 70 years on those who are appointed as Ambassadors/High Commissioners
An anti-corruption body answerable directly to Parliament to be set up
News laws to be enacted to recover losses caused to the State by misuse of State resources