Sri Lanka: Presidential Election 2019 is could be a three-cornered battle. – Jayadeva Uyangoda 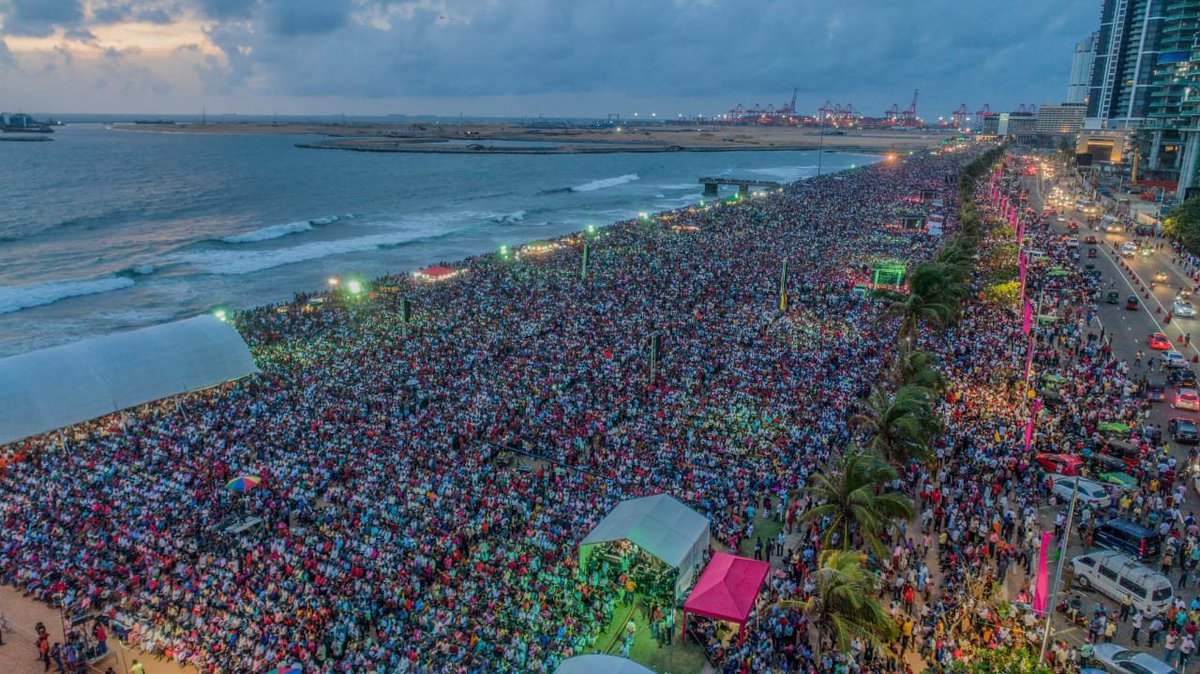 Former President Mahinda Rajapaksa who has remained a nominal member of the SLFP and the UPFA so far, has also been declared publicly as the leader of the SLPP. This is likely to cause a mass migration of the SLFP’s rank and file, including its aspirants to political office at all levels, to the SLPP.

Unless former President Chandrika Kumaratunga steps in in a desperate rescue attempt, the liquidation of the Sri Lanka Freedom Party, currently led by President Maithripala Sirisena, will become another political side story during the election year 2019-20.

The announcement of Gotabaya Rajapaksa as a presidential candidate has not yet led to much political excitement or fanfare in the country as his allies and SLPP supporters expected. Reaction to it seemed to be that it was merely another political event in a tumultuous election year. In my conversations with different people in the immediate aftermath of Gotabaya’s candidacy being announced, I noticed that there was no significant enthusiasm about his nomination as SLPP presidential hopeful.

People seem to be quite cautious, even skeptical, about the prospect of Gotabaya becoming the presidential candidate. Given the dreadful political memories of his words and deeds not so long ago, such caution is quite understandable. Besides, Sri Lanka is still a society where citizens are careful when they are offered the choice of bartering their freedom and rights for the wish fulfilment of one ambitious ruling family.

Prime Minister Ranil Wickremesinghe meanwhile has been provided with an opportunity to display his newly acquired skills in political satire. Soon after Basil Rajapaksa described his brother a ‘terminator’, Wickremesinghe found his element. He insisted, tongue in cheek, that the Sri Lankan people do not want a ‘kammutukaraya’. The real humour here lies in the Sinhalese rendering of the English word ‘terminator’ in to the utterly colloquial word, ‘kammutukaraya’. It connotes the meanings such as ‘killer’, ‘demolisher’ and ‘the reckless one who destroys everything around’.

It may not be an exaggeration to say that by choosing the word ‘terminator’ to describe his brother’s destructive potential, Mr. Basil Rajapaksa sounded prophetic as well. The Gotabaya project actually has already promised to ‘terminate’ from the political vocabulary such words as ‘human rights,’ ‘minority rights, ‘political freedom’ and ‘liberalism’. He takes pride in even threatening to terminate Sri Lanka’s democracy that has survived this long under severe stress and setbacks. For him and his ex-military and business-tycoon cohorts, democracy, political freedom, and human rights are wasteful luxuries which Sri Lanka should immediately discard.

When we recall the Ratupaswala episode that happened just five years ago, it is not difficult to picture Gotabaya Rajapaksa playing the role of a local Arnold Schwarzenegger before unarmed, innocent and helpless citizens who would demand their rights and freedoms. To those who demanded water, he infamously gave bullets.

Meanwhile, the Sajith Premadasa camp within the UNP has also launched its offensives against Gotabaya Rajapaksa. Just a few hours after he had been declared presidential hopeful at the party convention, Finance Minister Mangala Samaraweera issued a biting critique of the Gotabaya Rajapaksa project.

Samaraweera’s attack is more directly political than Wickremesinghe’s sarcasm. In a hard-hitting essay, Samaraweera argued that Mahinda Rajapaksa has chosen Gotabaya knowing quite well that it will cost the SLPP votes, those of the liberal-minded and ethnic minority citizens. According to Samaraweera, Mahinda Rajapaksa wants the ‘ terminator’ for a different reason: “to terrify the media, police officers, judges and public servants with a simple message: cross us at your peril.”

Meanwhile, two important questions have also emerged from within the UNP camp. The first is about the truth of the connection between the UNP and Gotabaya as well as the Rajapaksa camp.

The second is whether the Ranil and Sajith Factions within the UNP will prove capable of resolving the presidential candidate tussle without ceding ground to the Rajapaksa camp ahead of a crucial election. The way the UNP finds solutions to these two problems will prove vital to determine the political future of Sri Lanka, currently centred on the presidential contest.

The frequent media reports on the UNP’s friendly relations with Gotabaya Rajapaksa and Rajapaksa camp cannot be easily discounted. They in fact suggest that the upper echelons of Sri Lanka’s political class, divided as they are along party lines while pursuing their political ambitions, have a tendency and habit, in crucial moments, to protect each other.

If media reports on the special support allegedly extended to Gotabaya Rajapaksa by senior UNP ministers to facilitate the former to obtain a new Sri Lankan Passport are true, the fact remains that the Ranil faction might have been helping Gotabaya to protect the secrets of his dual citizenship.

It is probably the case that keeping the issue of his American citizenship as a secret is part of a deliberate ploy. The tactic perhaps is to create an atmosphere of fear in the country so that no challenge would be mounted, no credible investigation be carried out, and no independent inquiry conducted on the question of the ‘terminator’s’ presidential candidacy, even if its legal validity is questionable.

Meanwhile, the UNP’s internal fight over its presidential candidate is obviously hurting the party ‘s chances of mounting an effective challenge to a candidate from the Rajapaksa camp.

Ranil, Sajith and their close supporters do not seem to have realized that they are also turning themselves to be terminators of their party’s chances at the coming presidential election. Whoever who wins the on-going bitter fight for the UNP presidential candidacy will surely inherit a deeply divided and internally weakened party with a demoralized voter base.

In the current political climate, even if Sajith wins the battle, the challenge before him is not so simple. If he is to win the presidential election, he must not seek to compete with the image of the ‘tough guy’ being projected from the opposition. His candidacy must not become the Rajapaksa project presenting itself in a green shirt.

If he were to be a politically credible challenger, Sajith Premadasa would have to present himself as a liberal, democratic alternative to the candidate being offered up by the Rajapaksa camp.

He should base his campaign on the suggestions so explicitly articulated in Mangala Samaraweera’s critique of the Rajapaksa project and seek to create and build a new democratic coalition around his candidacy.

However, Sajith Premadasa is yet to show signs of having such a credible political vision. The ambitious Mr. Premadasa needs to be told by someone in the UNP that there is no guarantee that his incessant reminders to the electorate that his life mission has been fulfilling his late father’s dreams may not be a good campaign platform to win a presidential election with very high political stakes. Politics should be infinitely more serious, and fundamentally different from fulfilling parental dreams. If he wants to be a serious contender for power at the 2019 presidential election, he needs a credible political vision as well as a broadly democratic and multi-ethnic coalition.

At the same time, who is there in the UNP to tell Ranil Wickremesinghe that in the way in which he has terminated his own political credibility during the past five years, many voters who supported him in the past are now waiting for a chance to vote him out? Wickremesinghe seems to have realized the indispensability of a broad coalition to back him at the presidential election. But can he wish away the question of his credibility deficit among the independent voters?

Meanwhile, all the signs are that the JVP will declare Mr. Anura Kumara Dissanayake as its choice for the presidential candidate of the new front.

At a time when the people are disappointed with the main political parties and its candidates, there is the likelihood of many middle class and the minority community voters deciding in favour of a JVP-backed candidate.

Much of this new JVP votes would be those that brought the Yahapalanaya coalition into power in 2015. No UNP candidate hopeful, including Mr. Sajith Premadasa, at present seems to be able to retain the loyalty of those disenchanted and angry voters. This might well serve the JVP’s ambition of turning the coming presidential election into a three-cornered political battle.

Given the rapid pace at which political events are unfolding in Sri Lanka at present, it is still too early to say with any degree of certainty how different camps and candidates will fare at the forthcoming presidential elections. Election has not yet been declared. President Maithripala Sirisena, as unpredictable as he is, must also be exploring new moves that can spring fresh surprises. More than anything else, he needs political and security guarantees when he is out of power.

If the year 2019 has so far been a year of political uncertainties and instabilities for Sri Lanka, there is probably no reason for the remaining four months to change the character of this eventful year.