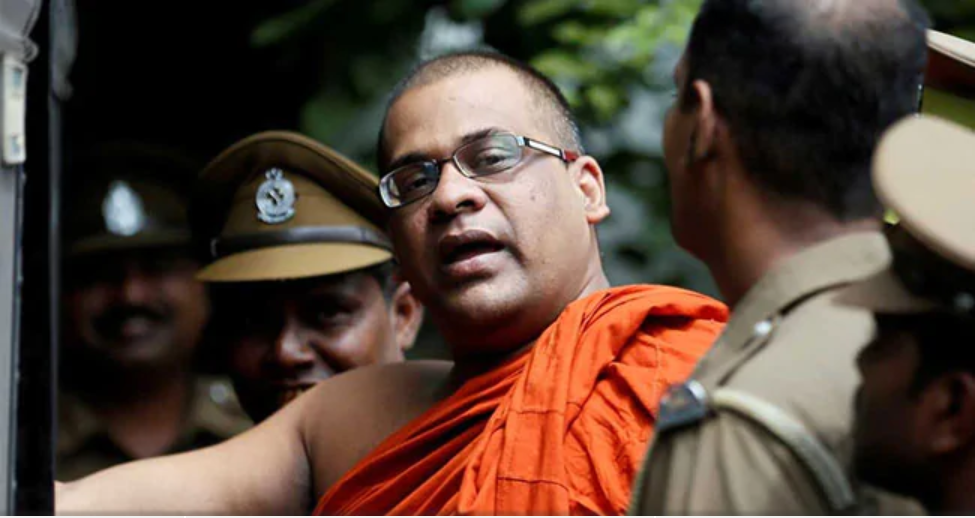 Image: Galagodaatte Gnanasara has been serving concurrent jail terms over his disruptive behaviour in court.

COLOMBO: Sri Lanka’s president granted an amnesty to a firebrand Buddhist monk on Wednesday, four days after holding talks with him at the country’s main prison, officials said.

President Maithripala Sirisena pardoned Galagodaatte Gnanasara days after releasing 762 other convicts to mark Vesak which commemorates the birth, enlightenment and passing away of the Buddha.

“The President has pardoned the monk and he should walk out of prison by tomorrow or the day after,” an official source said.

Gnanasara’s Bodu Bala Sena, BBS or the Buddhist Force, urged their supporters to assembly outside the main Welikada prison on Thursday afternoon to receive him.

On Saturday, Sirisena reportedly had lengthy talks with Gnanasara who is serving a six-year jail term for contempt of court.

Many had expected Gnanasara to be released on Saturday along with the 762 other convicts, but he was not among those freed.

Gnanasara has been serving concurrent jail sentences extending up to six years over his disruptive behaviour in court and intimidating a woman litigant in 2016.

He has long been accused of instigating hate crimes against minority Muslims in the Buddhist-majority country. The monk has denied involvement in anti-Muslim riots in 2014 that left four people dead.

His BBS was not linked to anti-Muslim riots that left at least one dead after April 21 suicide bombings blamed on Islamic extremists and which killed 258 people.

Gnanasara had maintained close ties with Wirathu, an extremist monk based in Myanmar, whose hate speech has stoked religious tensions in that country.

(Except for the headline, this story has not been edited by NDTV staff and is published from a syndicated feed.)