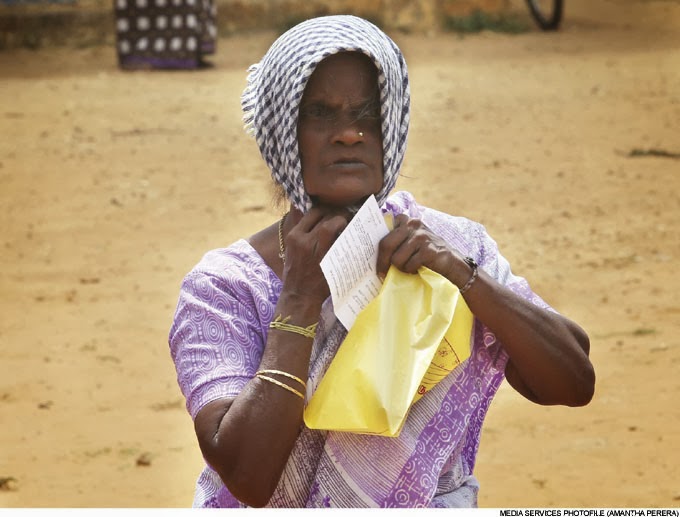 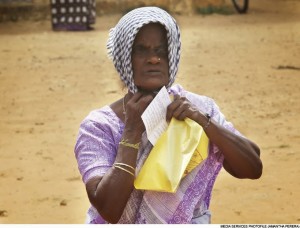 Amantha Perera
Its early morning in Mankulam, and I’m driving along the A9 – the road is paved, in marked contrast to the giant potholes that dotted the track a decade ago. It looks more like one of those new highways that have come up elsewhere in the country. This one is not as busy, but drivers need to be mindful of cyclists and cattle straying onto the road. I am here to cover the provincial council polls, as are many other journos. The ‘parachutes’ have landed from New Delhi and elsewhere. And almost all of them are converging on Jaffna.

Along the way, we hear the news that the former LTTE arms procurer Kumaran Pathmanathan (better known as KP) is planning a press conference in Kilinochchi later in the day.

My colleague and I had made plans to travel into interior villages such as Oddusuddan and Nedunkeni on the Mankulam-Mullaitivu Road. These villages, which used to be bloody signposts during the war, are regaining a sense of normalcy.

The KP press conference forces major alterations to our plans. We think about what we should do. Do we change plans and cover KP’s press conference? Drinking sugar-laced plain tea, sitting by the side of the A9 Highway as vehicles whoosh past us, I tell my colleague that KP is a big story – maybe we should forget the villages and make our way to Kilinochchi.

Driving overnight from Colombo, we had just about hit the road when the KP story broke. My colleague, who is a photojournalist employed by an international agency, isn’t convinced. He stands to lose more than me, if we decide to cover the press conference. He has the best chance for good frames in the early morning light. The presser, he says, will give drab pix and sound bites that everyone else will get – two things that both of us want to avoid, at all costs.

Just then, the decision is made for us – we receive another call from Colombo, telling us that journos are being flown in for the press conference in Kilinochchi.

As we restart our journey, I turn the jeep right at Mankulam junction – we are headed for the villages. Right from the onset, we had decided to avoid the media scrum.

Both of us have been to the north on more occasions than we care to remember. We had seen the destruction wrought by the war. Periodically, like in March 2002 when the then PM Ranil Wickremesinghe visited Chavakachcheri, there were media scrums. But the worst was LTTE chief Velupillai Prabhakaran’s press conference in April that same year. We wanted to avoid all that. We wanted to tell the stories of the people, as related by the people themselves.

As we drive to Nedunkeni, we talk about our many previous visits to the region. I remember the first time I flew to Jaffna, almost 20 years ago, when I was a trainee PR spin specialist working for the Foreign Ministry. Sitting on one of the side benches, utterly nervous and in awe, I almost fainted when the aircraft released anti-missile flares! Only when it landed in Jaffna, some 30 minutes later, did I find out that the flares had been a precautionary measure.

These days, my young colleagues fly to Jaffna in far more comfort and without having their nerves jangled. They get to sit back and take in the scenery. My initiation process was a tangle of nerves, fear and anxiety. I was left wondering how on earth I had managed to get here… and how I could get myself out with a workable story.

My first trip to Vavuniya was on an overnight bus which was filled with fellow travellers who had enough spirits in them to make the 12-hour journey a blur.

Though we want to avoid the media rush in Jaffna, there’s a valid reason for it. This election is a big deal. Only a few days ago, the UN High Commissioner for Human Rights Navi Pillay was in town, and she had aired her not-so-flattering views of the north. Moreover, India has called for this election all along, which is also true of nations such as the US and UK, and the European Union.

The Tamil National Alliance (TNA) sees the provincial council elections as a stepping stone to asserting at least a semblance of regional autonomy. And the international media’s periodical focus has fallen on Sri Lanka partly due to the run-up to the Commonwealth Heads of Government Meeting (CHOGM), creating something of a feeding frenzy here.

I speak to a 60-year-old man who tells me that when the Tamil militancy started, he had believed in it and supported it. While his neighbours and relatives migrated to other countries, he decided to stay back.

“Why?” I ask. He looks straight past me, and retorts: “Dumb decision.” I don’t know what it feels like to call a life-changing decision dumb when you are 60. I ask him who will get his vote this time. “The TNA,” he deadpans, “who else is there?”

Standing on the side of the road, I realise that despite impressive development credentials (the Central Bank Governor estimated mid this year that the Government had channelled US$ 3 billion worth of development work), the Government has failed to nurture an allied political leadership in the north, which the northern population feel linked to and trust.

This is aptly demonstrated by the outcome of elections in the north. The people voted for the TNA, dumping the Government and its allies who were probably sitting in the best seat to kick-start the region’s sagging economy.

I ask several experts why massive development spending had failed to garner public approval. Some are of the opinion that the people, especially those in the heart of the Wanni, still feel they’re second-class citizens without much of a say in their own affairs. Others believe that the Government has become the main focal point for the masses to blame for everything they suffered during the last bloody months of the war.

One expert I speak to offers a telling reason: he says that this is what happens when eight-lane highways are constructed in regions where the cattle population outnumber human beings. The major projects, he argues, are not in sync with the major grievances of the Wanni’s population – chief among them being low levels of income.

Highways are good, but there’s no direct benefit to the local population if they don’t bring with them new markets, new jobs and new factories – none of which has materialised on a grand scale in post-war Wanni. However, there’s no denying that the mega development projects in the Wanni are impressive. Last year, the Northern Province recorded growth of 25 percent, riding on the wave of major infrastructure work in the region. In June, the United Nations High Commissioner for Refugees (UNHCR) compiled a detailed report on the displaced and returnees of the north. The report offers some insight into the anomalies in the Wanni’s post-war development effort.

The UNHCR report concludes with the observation that “considerable achievements have been made in certain thematic areas and specific issues such as access to documentation, access to education, and freedom of movement and security.” It found that “a significant majority (93%) were satisfied with their household’s durable solution choice of return, relocation or local integration.”

Impressive, indeed. But there are details that take away the gloss. “Gaps remain in the areas of livelihoods, adequate shelter and access to properties,” the UNHCR report notes.

Soon after the provincial council elections, someone said that the Wanni voted from its heart and not from its head. Perhaps that’s true. But if the people of a region worst hit by war are to reap the post-war economic benefits, then someone should seriously consider how half the population is going to get out of earning less than Rs. 10,000 a month.
LMD