Sri Lanka – post-CHOGM: President now has to walk the talk 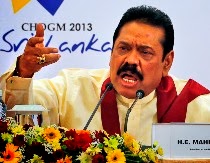 On Sunday evening, sharp at seven, just three hours after the Commonwealth Heads of Government Meeting (CHOGM) wound up in Colombo, the media handlers of the Commonwealth shut down the CHOGM media centre at the BMICH. They were obviously in a hurry to call it a day, after a week of round-the-clock tiring work – and not to mention occasional guard dogs of the government who had been unleashed on Richard Uku, the Commonwealth Spokesman.

True to the Sri Lankan style, the government’s acolyte in the media even signed a petition against the Commonwealth Spokesman for ‘discriminating against them’ in the Q and A sessions during some media conferences. A more convincing explanation for their petition would have been preventing them from delivering their self-advantageous paeans of the government and the President in those media conferences. They were competing against each other to score brownie points from the powers-that-be in the government.

Nonetheless, the curtain has now come down on the CHOGM and even the cops who had been given three days holiday for their exemplary management of traffic have now returned to work. The CHOGM had not been a propaganda coup that the government hoped it to be. Nonetheless, at the end, it was also not the unmitigated public relations disaster it had threatened to become in the run-up to the event.

President Mahinda Rajapaksa and Channel 4 stole the show for reasons which are interlinked: War crimes. The government could have better handled some of the allegations that were raised against it, such as the democratic deficit in the country, had it reined in its sycophant provincial politicians. Callum Macrae and the Channel 4 crew were on the news from the time they landed, courtesy the ruling Party orchestrated protests that called for the British scribes’ blood. However, another orchestrated demonstration that blocked the train the British television crew travelling in Anuradhapura crossed the red line, and set off a series of negative media reportage. That compelled the government, which had been relishing on those protests, to call it a day for all the protests. There were still some aberrations such as ‘civilians’ who demonstrated against visiting British Prime Minister, David Cameron, in Jaffna.

Equally interesting was the deafening silence of some of the key interlocutors of the government such as Wimal Weerawansa and those of the Jathika Hela Urumaya. They helped the government, simply by keeping mum. The usual charging of ‘international conspiracies,’ muted after quite some time, was indeed refreshing. That saved the day for the government.

Nonetheless, the CHOGM had been Sri Lanka’s moment in the limelight and it could not help that it cast light on its dark side. However, though die-hard liberal newspapers of the ilk of the ‘Economist’ would see the event in a negative light, for idealistic reasons, a fair evaluation of the CHOGM in Colombo was that, all was not lost for the host government.

Sri Lanka which emerged from the CHOGM is a better one than it had been prior to the CHOGM. The government tried to put its best face to the world during the summit. The beautified city, the newly commissioned expressway and the ambitious development agenda, presented the country in a positive light. For foreign dignitaries who assembled in Colombo, it could have been hard to believe that white vans did roam in this fairy-tale island.

Even David Cameron, the British Prime Minister who came here to shine a spotlight on human rights abuses, had been overly diplomatic and measured in his speech. He said, “This is an extraordinary country; it has enormous potential, you can really feel that when you’re here.”

He referred to the ‘enormous economic progress has been made and, as I say, has great potential.’

However, the message to the government was unambiguous. While appreciating the efficient delivery of goods and services to its public, the advanced democracies made it clear that human rights, media freedom and independent institutions could not be relegated. In the other words, they said, pro-growth authoritarianism would not be condoned. The gist of the message was that, should a country and its ruling elites be respected, they need to respect the fundamental rights of their people, in the first place.

Of course, Prime Minister Cameron set an ultimatum for the Government of Sri Lankan to complete its own investigation into war crimes, failing which he warned to support a global war crime inquiry. However, the government’s response had been measured; the interlocutors of the government restrained their proclivity to launch a usual attack of character assassination on the British Prime Minister. The President, of course said, that people in glass houses should not throw stones, in what appeared to be a reference to the British PM, but when pressed by the BBC correspondent whether he was referring to Cameron, the President resorted to a denial.

There may have been a long list of leaders from small States in Asia and Africa who enjoyed the local hospitality and glossed over Sri Lanka’s human rights concerns. However, in the hierarchy of States in the international system, their positions do not count much. What matters in international policy formulation is the position what Cameron, Abbot or Manmohan Singh would take on Sri Lanka. It is in this context, that Sri Lanka handled its troubles with reasonable success at the CHOGM.

Sri Lanka is now the chair in office, and President Rajapaksa the Chairman of the 53-member organization for the next two years. This luxury comes with strings attached. Sri Lanka and its President would be under a greater scrutiny. However, it also offers opportunities for Sri Lanka to reform and redeem its reputation in the eyes of the international community.

The government is already working with the Commonwealth Secretariat to strengthen the independent national institutions such as the National Human Rights Commission, Commonwealth Secretary General, Kamalesh Sharma, said during the pre-CHOGM media conference; the President nodded in approval. Later, Lalith Weeratunga, the President’s Ssecretary told a media conference held on the sidelines of the CHOGM that, the government had implemented 50% of the recommendations of the Lessons Learnt and Reconciliation Commission.

In the weeks to come, the government would be compelled to amplify its reform agenda, if it is to fend off international criticism.

Being the Chair of the Commonwealth, the government had agreed to expose itself to greater scrutiny. It would be required to comply with the core values of the Commonwealth, which are intrinsically the shared values of liberal democracies. It would now have to answer the family members of the disappeared, who wanted to know the fate of their loved ones. It would have to compensate the torture victims and prosecute their alleged torturers. It would have to strengthen national institutions of which independence and integrity were weakened by the 18th Amendment which took powers away from them and concentrated the powers of the President.

It would have to pass a Right to Information Bill, which the government had earlier defeated in Parliament.

The President says this is a free country. Now he will have to walk the talk.
CT