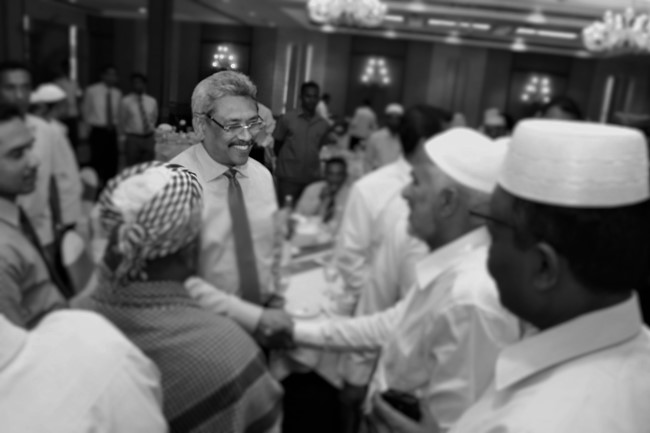 The Rajapaksas, who ruled the roost in the country some three years ago are seen now luring the Muslims, especially by appearing at Ifthar events, the events organised by various Muslim and non-Muslim groups for the Muslims to break their Ramadan fast.

Large gatherings of Ifthar, which should be meant for helping the poor to break their fast, are becoming frequent events with increasing political colouring.

However, going by this year’s Ifthar events attended by the Rajapaksas, one can argue that it is the various Muslim groups that are eager to associate with Rajapaksas, rather than the latter going behind the former.

Two Ifthar functions held recently and attended by former Defence Secretary Gotabaya Rajapaksa, an official much hated by the Muslims three years ago, had drawn much attention of the electronic and print media in all three languages. And the Rajapaksas were seen making use of the events to the hilt.

The interest shown by Rajapaksas and the Muslims in each other these days is not without reasons.

Despite some Muslim organizations have started to approach the Rajapaksas, the question remains whether Muslims at the grassroots level have changed their mind to support Rajapaksas.

The former had started to show their keenness in getting along with Muslims in late 2016, which was first indicated by a meeting convened by former President Mahinda Rajapaksa with his Muslim friends, where he assured the safety and security of Muslims in a future Government led by him.

Some Muslim groups’ new found love for Rajapaksas can largely be attributed to the outcome of the February 10 Local Government Elections, at which the Sri Lanka Podujana Peramuna (SLPP), the party unofficially led by the former President swept the electorate.

The SLPP came first in 231 out of 340 Local Councils for which elections were held. (Election for one council was suspended on legal grounds.)

The two main political parties in the Government, the United National Party (UNP) and the Sri Lanka Freedom Party (SLFP) on which the Muslims reposed their total trust until the recent anti-Muslim riots in Ampara and Kandy Districts, suffered a humiliating defeat at these elections.

The UNP came first in only 41 councils and the SLFP, which contested for some LG bodies under the symbol of the United Peoples Freedom Alliance (UPFA) was able to defeat the other parties only in around 10 councils.

The erosion of the UNP vote bank was incredible. The party that defeated the then undivided SLFP, led by President Maithripala Sirisena, bagging around five million votes at the 2015 August Parliamentary Election, lost about 1.5 million votes at the Local Government Elections.

In spite of the two coalition partners in the Government managed to collectively get more votes and seats in an overall perspective, it is the number of councils that are being dominated by each party that matters in deciding the winner.

They made a very serious blunder in calculation after the war victory, where they thought they could win all future national level elections without the support of the minorities

Thus the SLPP became the dominant party in all 17 Sinhalese dominated districts in the country.
It is obvious that the Local Government Election-results brought to the surface the political trend that had gradually been created for the past three years as an undercurrent, among the people in the Sinhalese dominated 17 districts.

With the two ruling parties wasting time in fighting each other while having no tangible economic or political programme to win over the voters in the rest of their tenure and the UNP, the main party in the Government having tarnished its image with the Central Bank Bond Scandal, one cannot expect the trend to turn. 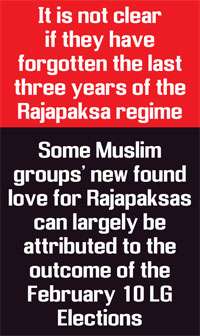 Yes, a comeback by the Rajapaksas in 2020 is most likely in the eyes of the general public.

It is in the light of this likelihood one has to understand some Muslim groups’ interest in the Rajapaksas.

Both genuine aspirations, as well as mere opportunism, could be inferred as the driving force behind this interest.

There are leaders of Muslim organisations who are seriously concerned about the safety and security of their community and they feel the necessity of a dialogue and interaction with the possible future leaders of the country.

Also, it is not a naysay that there may be people, who attempt to develop a rapport with the possible future rulers, with the sole purpose of gaining political or economic mileage, using the cravings of the Rajapaksas to win the hearts and minds of minorities.

There may also be another group, who are frustrated with the Government due to its inaction in general and particularly owing to its lethargic attitude during the recent anti-Muslim riots.

This was the backdrop against which Gotabaya Rajapaksa was invited for an Ifthar event in Beruwala, ironically one of three adjacent areas that came under attack by extremist groups in June 2013, during Gotabaya Rajapaksa’s tenure as Defence Secretary under his brother, President Mahinda Rajapaksa.
Large crowds attended the event and Rajapaksa was awarded a colourful welcome before he made an inspiring speech. As his brother did in 2016, the ex-Defence Secretary assured to the gathering the safety and security of Muslims under a future Rajapaksa Government.

Gotabaya might have been preferred over his brother in this event and in another such event held at a luxury hotel in Colombo in the light of his recent activities, which point to a preparation for the next Presidential Election.

He has formed an organization called Eliya (Light) and held a very successful seminar under the theme Viyath Maga at the Shangri- La Hotel in Colombo where he elaborated on his economic vision.
However, Gotabaya Rajapaksa seems to be in the plan B of the Joint Opposition as their main concern has been to create a situation where the Parliamentary Election would be held first.

According to Plan A, Mahinda Rajapaksa is expected to be the next Premier who might manipulate the situation so that he would be able to ascend to the Presidency after re-amending the 19th Amendment to the Constitution.

Whether it is Plan A or B, Rajapaksas critically need the support of the minorities.

They made a very serious blunder in calculation after the war victory, where they thought they could win all future national level elections without the support of the minorities.

They arrived at this wrong conclusion in the light of the 2010 Presidential and Parliamentary Elections but only to wake up to the reality with their humiliating defeat in 2015.

In an interview with the Japan Times during a visit to Japan in 2016 former President Rajapaksa confessed that he was defeated as the Muslims who constitute around 10 per cent of the population did not support him. He had told this in several local media as well.

Yet, despite some Muslim organizations having started to approach the Rajapaksas, the question remains whether Muslims at the grassroots level have changed their mind to support Rajapaksas.

It is not clear if they have forgotten the last three years of the Rajapaksa regime when they were harassed by various extremist groups with the apparent support of some Ministers of the Government.

Muslims for reasons – real as well as perceived – strongly believed then that those groups had the blessings of the top leaders of the Government.

It must be recalled that it was the ordinary Muslims dissociated themselves from Rajapaksa regime before their leaders did so, after these unpleasant happenings.

Hence, Rajapaksas must develop a mechanism to address the ordinary people, not necessarily the leaders, in a convincing manner, if they were serious about a lasting support of the Muslims.