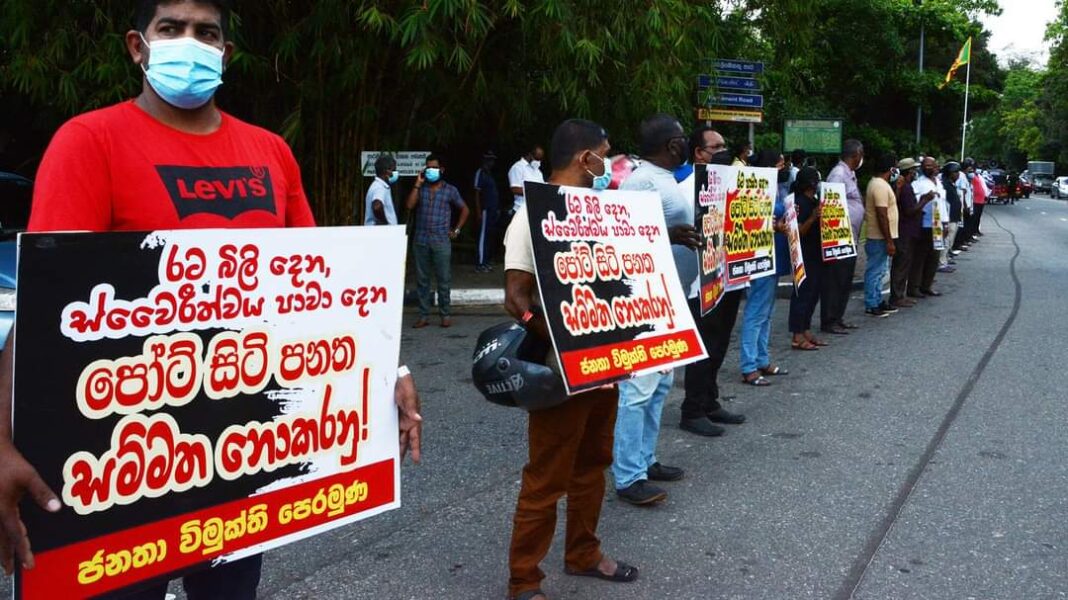 The Police are to take legal action against Opposition parties, the Janatha Vimukthi Peramuna (JVP) and the Samagi Jana Balawegaya (SJB), over recent protests conducted by them near the Parliament against the Colombo Port City Economic Commission Bill.

Speaking to The Sunday Morning, Police Media Spokesman DIG Ajith Rohana said that legal action would be taken against both protests due to the alleged violation of quarantine-related rules and regulations.

The protests demanded that the Government not be allowed to pass the said Bill in the midst of the heightened Covid-19 pandemic environment in the country.

The Bill was, however, passed in Parliament on 20 May with a super majority.

DIG Rohana said that according to the B Report filed in the relevant court by the Officer-in-Charge of the Welikada Police, approximately 150 people had taken part in the JVP protest at the Polduwa Roundabout. The protestors had, according to him, violated the quarantine rules and regulations, especially the provisions in the gazette published on 15 October 2020, the health guidelines published by the Director General of Health Services (DGHS), provisions of the Quarantine and Prevention of Diseases Ordinance, and certain provisions of the Penal Code.

Legal action would be taken against the perpetrators after identifying them from the closed circuit television footage, DIG Rohana added.

Accordingly, action is to also be taken against the SJB protest where, it is learned, approximately 30 people had participated.

However, speaking to The Sunday Morning, NPP parliamentarian Dr. Harini Amarasuriya said that the party is not afraid of any legal action since they conducted the protest in connection with a national concern.

“If this Colombo Port City Economic Commission Bill is approved, we won’t be able to revise it for another 99 years. People should know the upcoming danger and the damage that could happen to the country by approving it. This could have an effect over the unborn generations as well,” she claimed.

According to Dr. Amarasuriya, the protest was not against the quarantine rules and regulations. “We did it while observing the social distancing rule and by wearing masks. So how could they say that we violated the law?”