Sri Lanka: Police have no authority to stop protests; Journos complain to HRC-SL 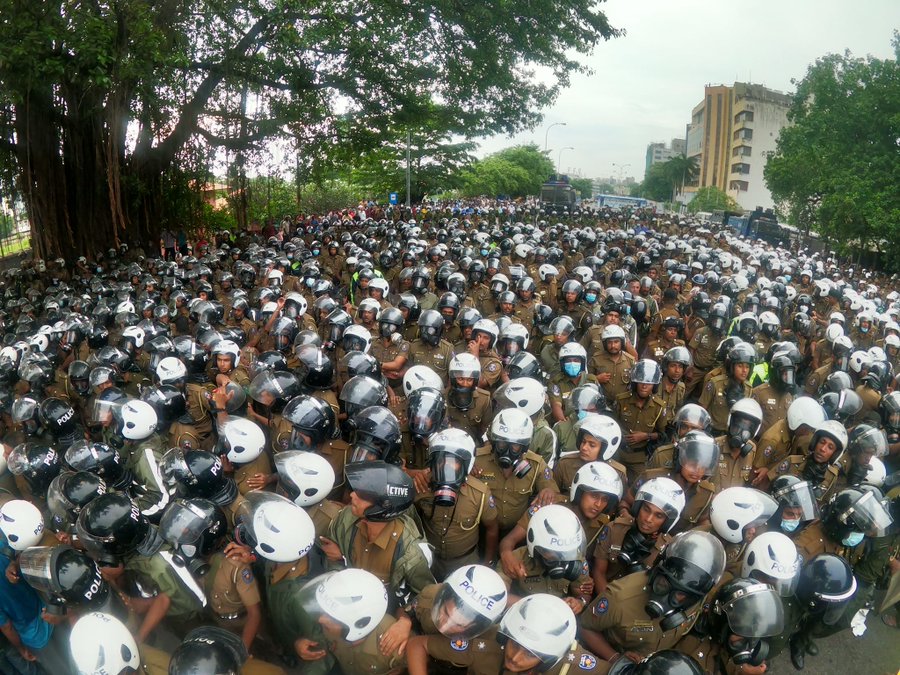 Image: A huge police force was stationed as a barricade to block the protestors on 02 Nov 2022.

The Police Ordinance does not grant the Police the authority to prevent a protest, as the Sinhala version of the Ordinance, which prevails over the English and Tamil texts of this piece of Legislation, mentions only a “perahera” (procession) and not a protest, the Young Journalists’ Association (YJA) claimed yesterday (2).

Speaking at a media briefing, YJA Chairman Tharindu Jayawardhana said that according to the Police (Amendment) Act, No. 41 of 1984, the Police should be notified six hours in advance, if a perahera is to be held.

“When the Police Ordinance was drafted, English was the only language in which they drafted the said Legislation. By the time the 1984 Amendment came into force, Sinhala was the language that prevailed in the event of any inconsistency between the Tamil, Sinhala, and English texts of the Legislation. If this should be applicable to a protest march, then it should have clearly mentioned a protest march, because the Sinhala language text clearly differentiates between a “perahera” and a march.

“The Police cannot differentiate between a march and a “perahera”, and are unlawfully stating that this protest should be stopped. Even during an Independence parade, the Police issues orders asking the public to use alternative routes because the roads are closed off for the parade. However, in this instance, the Police are saying that this protest should be stopped because it is blocking roads.”

However, in Section 77(1) of the English text of the Police Ordinance which states that it gives the Police the power to prohibit such, holds that “No procession shall be taken out or held in any public place in any area, unless notice in writing of such procession has, at least six hours before the time of the commencement of such procession, been given to the Officer In Charge (OIC) of the Police station nearest to the place at which the procession is to commence”, with several limited exceptions that do not apply to yesterday’s protest.

He further claimed that a number of MPs and individuals whom the Police believed to be organisers of the protest had received letters stating that they were not permitted to hold yesterday’s protest.

“We know that within the course of Tuesday (1), the Police had threatened a number of people who they believed to be organising a protest and threatened them to get the permit of the Police. Accordingly, as the YJA, we made a complaint to the Human Rights Commission of Sri Lanka (HRCSL) that the Police are making unlawful threats.

“We complained to the HRCSL in writing that the Police is casting aside the recommendations made by the HRCSL and the verdicts of the Supreme Court (SC), and acting in an arbitrary manner. Following this, the HRCSL held a media briefing on Tuesday evening and informed the Police that they cannot and should not use the Police Ordinance to violate the Fundamental Rights in the Constitution. Despite this, from Tuesday night to this moment, they have handed over letters to those they believe are organising the protest.

“A letter signed by an individual named Naleen Dilruk states that permission cannot be given to conduct this protest. Previously, there are a number of verdicts that have been given by the SC which clearly state that the Police has no authority to grant or deny the same. There are also instances where the Police had received court orders to personally pay compensation for those that they had stopped. We have informed the Colombo Fort Police OIC and the Inspector General of Police in writing that there are applicable SC verdicts, especially Saranapala vs. Senior Superintendent of Police Solanga Arachchi, and Others.”

Jayawardhana further noted that they have made a request to the HRCSL to summon these individuals and obtain a statement from them.

Meanwhile, the Janatha Vimukthi Peramuna (JVP) which told The Morning on Tuesday that it would not support or be a part of yesterday’s protest, criticised those who were making attempts to obtain injunction orders to stop yesterday’s protest. Speaking to the media yesterday, JVP member Wasantha Samarasinghe said: “If someone is attempting to obtain Court injunction orders to stop the protest in order to get points from the Government or due to others’ orders, those are temporary. The people ousted a President on 9 July. These people held an “aragalaya” and showed that no power is greater than the peoples’ power. So we would tell President Ranil Wickremesinghe and former President Gotabaya Rajapaksa that the peoples’ power is above all, and that therefore, attempts to hold off the protests, or to stop the peoples’ right to gather, will result in limiting their time in power, as the peoples’ struggle cannot be curtailed through these, and will only move forward. This fight will not stop until the corrupt and repressive Government is ousted.”