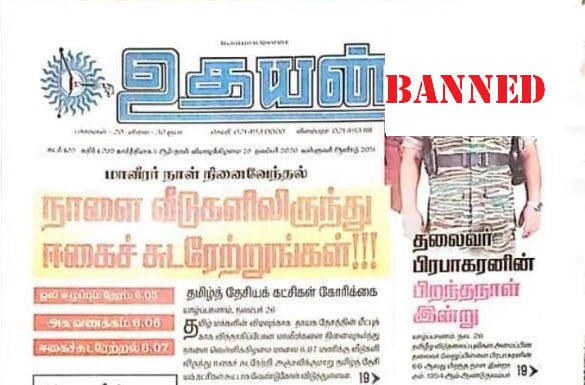 Sri Lankan police have filed a case under the Prevention of Terrorism Act (PTA) against the Jaffna-based Uthayan newspaper, for publishing images and quotes of Velupillai Prabhakaran, leader of the Liberation Tigers of Tamil Eelam (LTTE), on his birthday, November 26.

The case, which was filed by the police earlier this month in the Jaffna Magistrate’s Court, has been adjourned till March 21.

The paper’s publisher and former parliamentarian E Saravanapavan said that the case was filed as an act of retribution by Sri Lankan police, as the newspaper had published the derogatory comments of Jaffna police Headquarters Inspector, which had caused outrage among Tamils across the North-East, and were shared widely on social media.

Saravanapavan claimed that neither he nor the newspaper’s office were officially informed of the charges, and that they had found out about the case through online news reports.

The former MP outlined the newspaper’s history as a key target for repressive forces, starting with the shelling of the office by the Indian Peacekeeping Forces (IPKF) in 1985 which resulted in the killing of 7 bystanders. Uthayan’s journalists and offices also frequently came under attack by Sri Lanka’s security forces and paramilitaries during and after the armed conflict.

Saravanapavan went on to slam Sri Lankan police for failing to investigate a single complaint Uthayan had filed over the years, including into the killings and attacks on its journalists.

“These cases are a way to persecute all those Tamil people, journalists and media houses, who espouse Tamil nationalism,” Saravanapavan said.