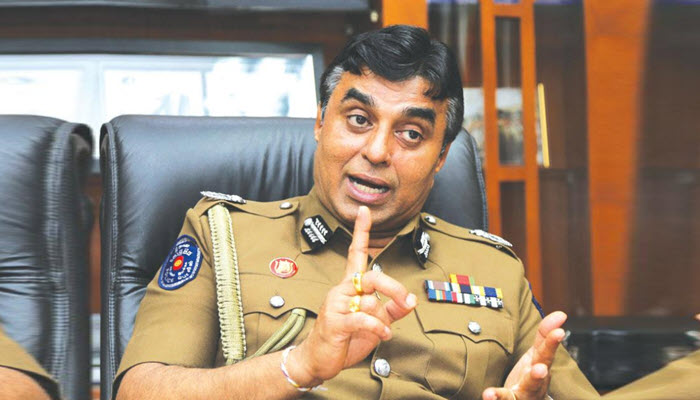 ECONOMYNEXT – Sri Lanka’s police chief Pujith Jayasundera, now on compulsory leave, following Easter Sunday bomb attacks, has petitioned the Supreme Court alleging he was kept out of national security council meetings after October 2018, and he was offered a diplomatic post if he resigned.

A Deputy Inspector General who was head of State Intelligence was not repoting to him but the President, the police terrorist investigations deprtment had been asked to stop investigations into Islamist extremists and he did not have full information to take action, he had said.

In the fundamental rights petition, he alleged that on the instructions of the president he was excluded from National Security Council meetings since early October.

The president had required Nialantha Jayawardena, Senior Deputy Inspector General of Police as Director, State Intelligence Services (SIS) to report directly to him, the IGP alleged.

“The Petitioner was only made privy to whatever information was sent to him from time to time, and was denied the ability to have full recourse to or participate in vital consideration of matters of national security,” the IGP pleaded.

“It is in this context, that the Petitioner did all he could on the basis of limited information given to him, subject to constraints imposed on him.”

Usually the first briefing at an NSC meeting is done by State Intelligence Services, which includes developments on extremist organizations, LTTE and diaspora issues, threats to VIPs and activities of certain international terrorist groups.

“In the absence of a State of Emergency in the country, preventive steps such as arrest and prosecution must necessarily be done by the Police and hence the presence of the Inspector General of Police (IGP) at the NSC was very critical,” Jayasundera said.

“However, the Petitioner despite being the Inspector General of Police, was excluded from attending NSC meetings, since October 2018.”

He said the President had required Nilantha Jayawardena, Senior Deputy Inspector General of Police as Director, State Intelligence Services (SIS) to report directly to him.

On April 09, IGP was called to a meeting at the Defence Ministry, where the director of SIS referred to a threat by extremist Islamist elements, but there was no emphasis on the urgency of the matter, he alleged.

He had then received a letter from Chief of National Intelligence, Sisira Mendis with an annexure containing information about an attack by Zahran Cassim and his group, saying secret inquiries are on, and that it was “important to alert the law enforcement agencies to be vigilant concerning the information.”

There was no classification to indicate the urgency of the situation, such as Top Priority.

The IGP had decided to forward letters to four Deputies Inspector General, to improve vigilance. To make sure it was taken seriously he had marked them ‘Top Priority.’

He said he forwarded the letter to Senior DIG in charge of Western Province where many important churches and the Indian High Commission was located, the head of STF, which had operations around the country and had good relations with embassies and provided security to VIPs.

The letter was also given to the head of Special Protection Range who was in charge of ministerial, diplomatic, judicial security and security of retired presidents and counter terrorism units.

He had also informed other Senior DIGs about the matter, when discussing daily situation reports.

A year ago, in a letter of April 08, 2018 the State Intelligence Service asked the the IGP to tell the police Terrorism Investigation Department to suspend all investigations in to extremist Muslim factions with links to known terror organizations, the petition said.

He had received letters on the 18, 19 and 20 April, which shared information on SIS investigations, which were continuing, but they did not request any action.

He was unaware whether the matter had been discussed at the National Security Council and what actions had been decided, if any.

On the night of April 2019, the IGP had got a phone call from the Defense Secretary regarding an intelligence input from SIS regarding an imminent attack, but no action was requested.

He was not given information on the identity of the foreign intelligence, whether it was a friendly or hostile nation or the credibility of the information.

On Easter Sunday he had been informed around 8.50 am about the bombs and by around 9.00 he had gone to Kochchidade church. The President had called him around 9.15.

He was called to a special meeting at the Defence Ministry. He was also summoned by the Prime Minister.

On April 22 a meeting of the National Security Council was called at the President’s house to which he was invited for the first time since October 2018.

On April 23, Jayasundera was asked to come to the Presidents house, where he was told the Defense Secretary and IGP had not informed the President about Easter Sunday attacks.

He was told that a commission of inquiry had been appointed and that it will be converted to Presidential or Special Presidential Commission.

The petitioner alleged that that he was told that the Commission would find the IGP guilty.

But if he resigned he would be given a diplomatic posting or made a senior government official and the inquiry report would not be adverse.

The plaint said the President was not the disciplinary authority in respect of the IGP and he had no power to send the police chief on compulsory leave.

There was specified process for removing from office both the IGP and the Attorney General, to protect their independence.

Jayasundera pleaded that he was willing to be subject to an inquiry according to the Removal of Officers (Procedure) Act which assured the “degree of protection afforded to the independence of the holder of the office of Inspector General of Police.”

He alledged that the president was “taking various measures to circumvent the need to set up an inquiry into whether the Petitioner IGP was guilty of gross neglect of duty, in a bid to circumvent the protections” given in the Removal of Officers (Procedure) Act.

He alleged that the President and Constitutional Council exceeded powers in sending him on compulsory leave and appointing an acting IGP.

The petitioner sought leave to proceed with the application and interim relief suspending his compulsory leave, and the appointment of an acting IGP, and order the President not to remove him until the case was heard. (Colombo/June02/2019)