Sri Lanka Police be placed under the Ministry of Defence at all times.- Military report reject LLRC Recommendations 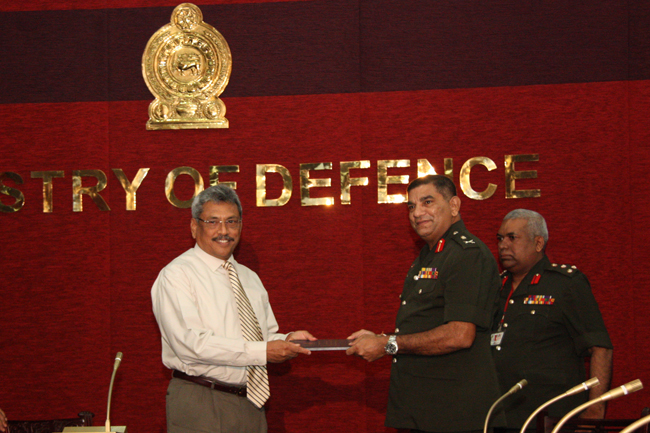 Govt. should formulate its own rules
The Army proposed to the government that it formulate its own rules to deal with internal war situations as the
International Humanitarian Law (IHL) principles, applicable to internal war situations had not adequately addressed various complex issues, and the existing rules were seemingly applied to state actors only.
This was revealed in the report of the Army’s Board of Officers on the Implementation of the Recommendations made by the LLRC.

In its report, the army rejected a suggestion by the commission to confine police to civil matters only and stated that, “Board recommends that the Sri Lanka Police be placed under the Ministry of Defence at all times and it proposes that a Ministry of Defence Board should study and make recommendations with regard to the Role of the Police in insurgencies and terrorism. The Board agrees that in many countries the Police do come under the Home Ministry or Provincial Administration. However, the Board notes that such countries do not face widespread internal disorders. Conversely, the Police in some countries that face internal threats have proved to be total failures.”

“With regard to the presence of Military bases in the North and East, the Board observes that the Government has an absolute right to maintain its armed forces anywhere in the Island, according to the country’s strategic and security needs. The Board also notes that military bases are located causing minimum inconvenience to the public and in the aftermath of the Humanitarian Operation, all High Security Zones and many lands previously occupied by the armed forces have been released to the public. However, the Board recommends that the Army should appoint special boards, covering the 4 Security Forces Headquarters that are located in the North and East (Jaffna, Kilinochchi, Mullaittivu, Wanni and East) to examine in detail with regard to the lands, presently occupied by the Army and only those lands that are vitally required for security purposes to be retained and such lands be legally acquired at the market value and, in addition, owners should be given alternative lands.”

(Govt. should formulate its own rules was the original caption for this news item)
DM