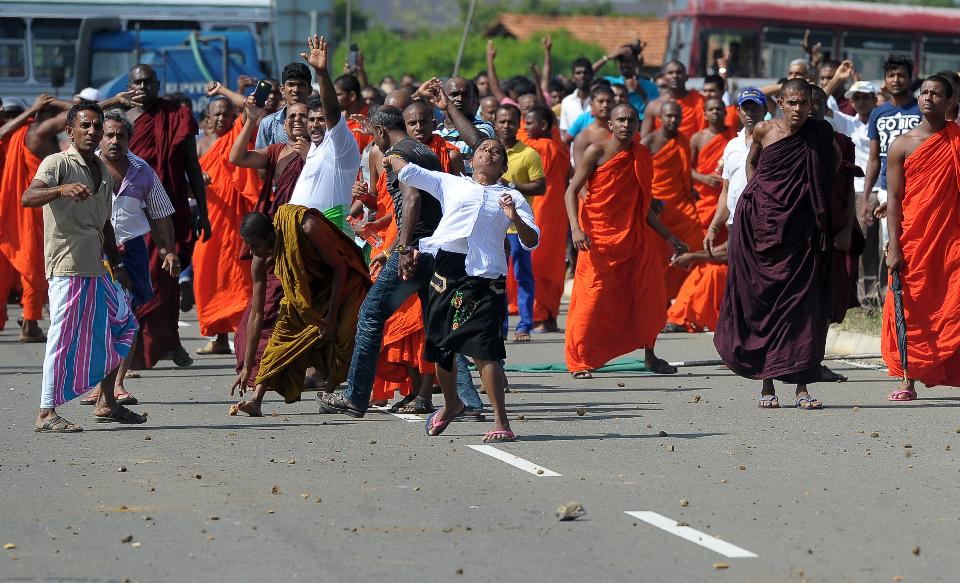 Image: Sri Lankan activists lead by Buddhist monks pelt stones at police during a protest in the southern port city of Hambantota on January 7, 2017. (Forbes)

The Hiru TV drone, which recorded and transmitted aerial pictures of the Hambantota protest and police crackdown on Saturday, had been launched about two kilometres away from the place where Prime Minister Ranil Wickremesinghe and other dignitaries were present, News Director of Asia Broadcasting Corporation Sudeva Hettiarachchi has said .

Hettiarachchi argued that there had been no need for the Prime Minister’s Security Division (PMSD) to grab the drone which posed no threat to anyone.

The drone was given back to Hiru TV on Saturday evening by the prime minister’s security officers minus the memory chip.

Hettiarachi, contacted for comment again last night, said the chip, too, had been returned, but it was too early to say whether it contained all the data recorded during the Hambantota protest.

“We will have to introduce guidelines for the sue of drones in the future,” he said adding that according to the civil aviation law of the country it needed the approval from the Ministry of Defence to use a drone.

Asked whether any action would be taken agains those who seized the drone owned by a media organisation, Kalansooriya said no decision had been taken in that regard.

“This is a violation of rights of journalists and people’s right to know,” she said.
The Island