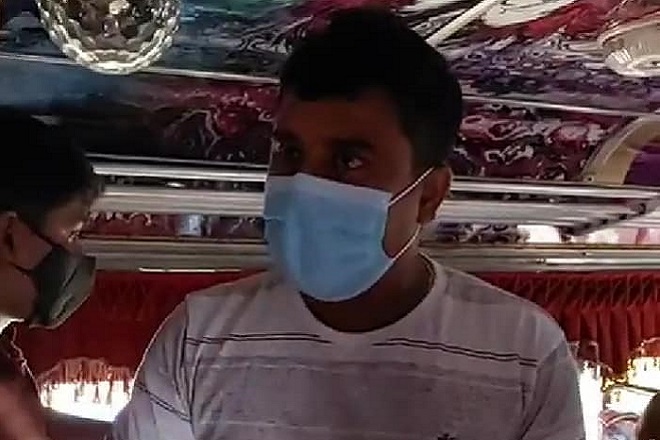 Image: A plainclothes police office who tried to abduct the lecturer.

Writing on this Facebook page lecturer Aminda Lakmal of the University of Jayewardenepura says that plainclothes police men tried to abduct him while we was returning from a protest against militarisation of education.

An English translation (edited) of his FB post fellows:

I write with sadness.

Today (05), a group of lecturers and students at the University of Jayewardenepura, including myself, were returning to the university after participating in the protest organised by  of the People’s Movement Against Militarization of Education. The protest was organised by the Federation of University Teachers’ Associations (FUTA). The protest was held peacefully observing the health guidelines.

Suddenly, between Gansabha Junction ගම්සභා හන්දිය and Delkanda Junction දෙල්කද හන්දිය, [ on route138] a group of three men in plain clothes got on the bus and approached me without saying a word. The students behind me suddenly jumped forward and protested, “How can you take our sir like this?”

Students also continued to oppose those who came in civilian clothes. Later, during the argument, Prof. Janak Kumarasinghe and Prof. Saman Yapa, who were also on the bus, kindly inquired as to the reason for the intervention and identify them.

The Crime OIC of the Mirihana Police Station who was in civilian clothes identify himself.  He showed his ID. Eventually the bus got to go safely.

The incident was videotaped and it is  available here.

Is it possible for the police to come in plain clothes and arrest any person without informing the reason or introducing themselves?

Plainclothes police men said they have come looking for a person. They said it was Wasantha Mudali*. Wasantha Mudali is the president of the Inter University Student Federation. Could not they recognize the famous person who has been featured in so many media?

So, whoever comes to arrest someone  should not have a warrant against him or her under civil law?

Don’t you need a warrant to arrest someone through a photo? (They said they received information that the person they wanted was on the bus)

I am well aware that being a “lecturer” and having of the social power has brought relief to me. But if this happened to a normal ordinary citizen, what would happen to him? (I do not want to call myself a fighter)

Although I understand this to be a funny incident, isn’t this a serious threat to the rule of law and democracy in the country?

The government is launching a repression. When they came for me today, I had some solidarity and encouragement. they may come to you tomorrow. But when they come for you may not have anyone to stand up for you. You could end up in jail without knowing the reason for your arrest. You may even die.

I write that because this is not a feature of a democratic state.

I hope to lodge a complaint on my human rights violations.

Meanwhile speaking in the parliament to day TNA MP Sumanthiran raised the issue of abduction of student leaders.

People are being abducted by police in civvies; Why does SL have a Minister? – Sumanthiran

TNA MP M.A. Sumanthiran questioned as to why Sri Lanka has a minister for Public Security when students & activists are being abducted by plain-clothed police in broad daylight.

Speaking in Parliament today the MP said that such arrests portrayed a though break down in the law-and-order situation in the country.

MP Sumanthiran also questioned as to why the police had come in white vans to arrests the suspects.

The MP said that arresting people in civvies sets a bad precedent which would pave the way for criminals & underworld gang members to do the same.

The MP said that the government was attempting to send a subtle reminder to the protesters adding that “You want to tell the country, remember we did this earlier…we have brought it back. You want to instill fear..”

Sri Lanka Police have arrested student activists for their involvement in the protest that took place close to the parliament on 03rd August.

Another student leader was abducted on 05th and later found in a police station.